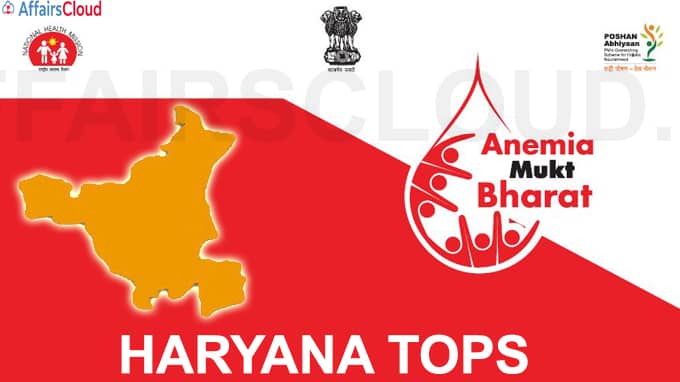 On October 21, 2020, the 8th Governing Body Meeting of the State Health Society of the National Health Mission (NHM) was held in Chandigarh where Anemia Mukt Bharat (AMB) Index was released which has been topped by Haryana with a score of 46.7 among all the 29 states in the country.

-Haryana is also one of 11 states in the country that have achieved National Health Policy targets well before 2020.

-The institutional deliveries in the state have increased to 93.7% due to 24-hours delivery facilities.

It is an initiative of the Union Ministry of Health & Family Welfare (MoHFW) and UNICEF (United Nations Children’s Fund) to reduce the prevalence of anemia all over India.

i.On 26th August 2020, NITI Aayog in partnership with Institute of Competitiveness released the Export Preparedness Index (EPI) 2020, this is the first report to examine export preparedness and performance of the states of India. Gujarat was identified as the top performing state in the category of Coastal state and also topped the Overall rankings.

ii.On 4th August 2020, FutureBrand Index 2020 was released, Reliance Industries Limited (RIL), Oil and Gas Company ranked as the Second Biggest Brand for its recognition associated with its growth, innovative products and customer service after Apple which topped the index.