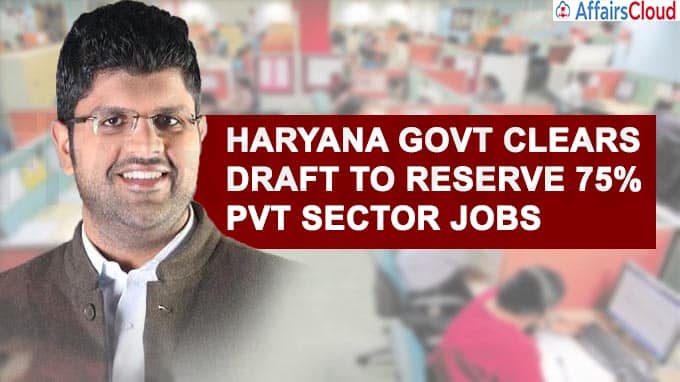 The Haryana state Cabinet, under the chairmanship of Chief Minister Manohar Lal Khattar, has passed the draft “Haryana State Employment of Local Candidates Ordinance, 2020” to provide 75% reservation for the residents of Haryana in private sector jobs having salary of less than Rs 50,000 per month in companies, Societies, Trusts, Limited Liability Partnership (LLP) Firms, partnership firms etc. situated in Haryana. Employment providers which have more than 10 employees in its premises would be covered in this upcoming Act. Now, this ordinance will be brought before the Council of Minister in its next meeting.

-Companies will have to register those employees that have salary below Rs 50,000 on the portal of the state’s labour department. Companies which would not register will face a monetary punishment from Rs 25,000 to Rs one lakh under section 3 of the Haryana State Employment to Local Candidates Act -2020.

-The law will have stringent rules for industries and firms that will try to hide information regarding employees.

-Domicile certificate is mandatory for a candidate to get the benefits under this scheme.

-If private companies will not be able to find suitable candidates, then they can inform to labour department and then will be issued permits to hire from other states.

-These rules would apply to recruitment after the date of notification of this ordinance.

The quota was promised by Jannayak Janata Party (JJP) chief Dushyant Chautala before the 2019 state assembly election. His newly formed party went on to win 10 seats and later formed an alliance with the BJP to form the government in the state. Mr Chautala was appointed the deputy Chief Minister.