On November 19, 2019, Haryana State Government led by its chief Minister (CM) Manohar Lal Khattar has decided to formulate a new department called the Department of ‘Foreign Cooperation’ to focus on initiatives taken by the state for the promotion of investment, youth employment and welfare of Non-Resident Indians (NRIs)/Person of Indian Origin (PIO). 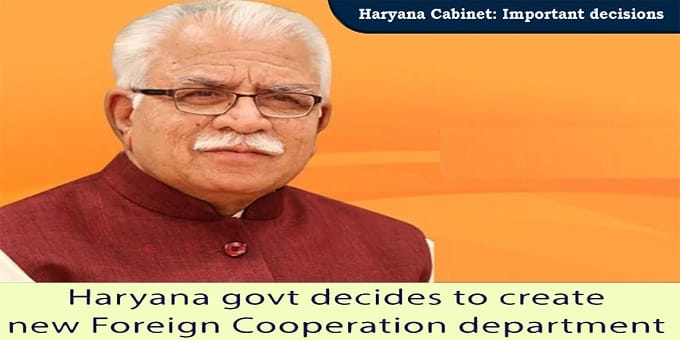 i.The new department incorporates cooperation in public and private sector organization as well as promoting investment, employment, education and skill development in the state and promotion of Haryanvi culture and welfare of Haryanvi diaspora, participation in bilateral and multilateral forums .

ii. The Department will also work in sync with the Ministry of External Affairs (MEA) to boost international cooperation with provinces of foreign nations & increase engagement under twin cities programmes of MEA. It will also maintain contact with Indian Missions on matters that are related to the state of Haryana.

iii. On the other hand, Haryana’s cabinet has decided to call a special Haryana Vidhan Sabha session to commemorate the 70th anniversary of the adoption of the Constitution of India on 26 November 2019.
By bringing an amendment in a rule of the Haryana Ministers Allowances Rules, 1972, the cabinet also decided to revise the House Rent Allowance admissible to the Ministers to 80,000 rupees with an additional 20,000 rupees from 50,000 rupees to cover electricity and water charges that is totalling Rs.1 lakh rupees per month.