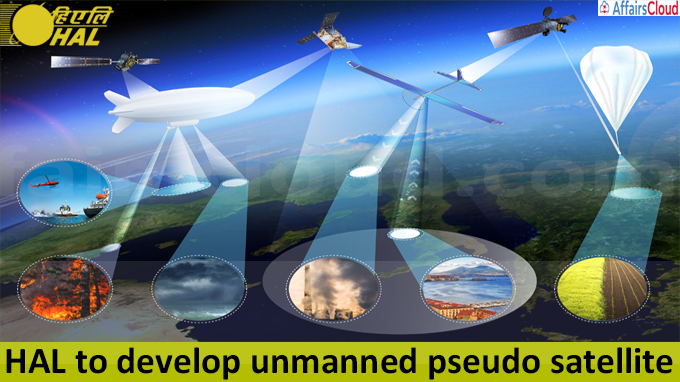 In a first of its kind in the world, the Hindustan Aeronautics Limited (HAL) is developing a futuristic high altitude unmanned pseudo satellite namely Combined Air Teaming System (CATS) with a start-up company.

Reason behind this development:

–This project focuses on strengthening India’s military strike capabilities. It’s a team of unmanned aircraft and vehicles with manned jets.

–It can hit the target at a distance of 700 kilometres or can go to 350 kilometres and come back. It can also carry ammunition, missiles if needed.

i.On January 13, 2021, as a part of Atmanirbhar programme, the Cabinet Committee on Security (CCS) under the Chairmanship of Prime Minister (PM) Narendra Modi approved the procurement of 83 Light Combat Aircraft (LCA) Tejas at the cost of Rs. 45,696 Crore for Indian Air Force (IAF). LCAs are manufactured by HAL.

ii.(HAL) successfully Test Fired the Indigenous Smart Anti Airfield Weapon (SAAW) from the Hawk-i aircraft close to the coast of Odisha. It is the 1st Smart Weapon to be fired from an Indian Hawk-Mk132.