President Pranab Mukherjee and PM Modi pressed a button in a specially crafted box at the stroke of midnight and formally launched GST. 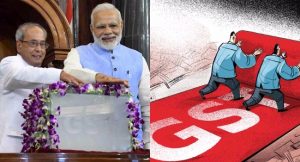 July 1 to be observed as GST Day

As per an order issued by Central Board of Excise and Customs (CBEC), July 1 will be known as ‘GST Day’ and will be celebrated in all offices of CBEC just as Central Excise Day and International Customs Day.