Union Government to mobilise Rs. 10 crore investment under Ambitious Sagarmala Project, the mobilization includes 4 crore in the Infrastructure alone.This ambitious project is important as Maritime logistics is a key component in Indian Economy, Accounting 90 % Export– Import trade by Volume and 72% of Trade by Value. 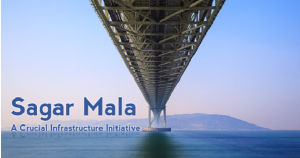