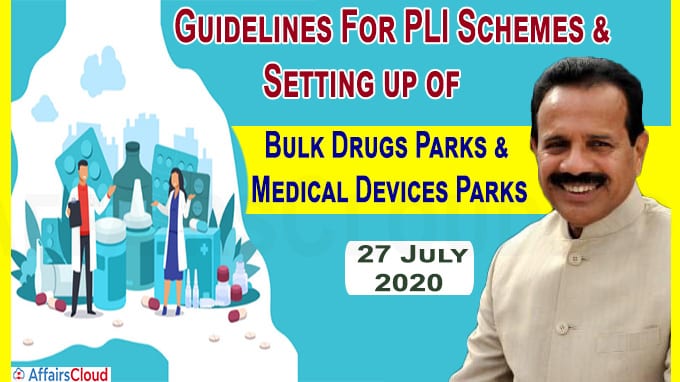 On July 27, 2020, In order to boost domestic manufacturing of bulk drugs and medical devices parks in India, Union Minister for Chemicals and Fertilizers, Devaragunda Venkappa Sadananda Gowda launched guidelines for four schemes of Department of Pharmaceuticals (under ministry of chemical & fertilizers), two each for Bulk Drugs and Medical Devices parks, on the lines of making India Atma Nirbhar (self-reliant) in pharma sector.

Before heading towards the schemes let’s have a look at the Indian pharmaceutical industry.

Indian pharmaceutical industry is the 3rd largest in the world by volume and 14th largest in terms of value. India contributes 3.5% of total drugs and medicines exported globally. Currently India almost entirely depends on imports, mostly from China, for production/supply of 53 critical bulk drugs. 86% of medical devices, too, are imported. Notably, Bulk drugs accounted for 63% of the total pharmaceutical imports in the country during FY 2018-19.

Now, let’s go through the schemes and their guidelines:

The scheme for Promotion of Bulk Drug Parks, which has been approved by the Government of India (GoI) on March, 2020 was launched with an outlay of Rs. 3,000 crore for a period of 4 years i.e. from FY2020-2021 to FY2024-2025 to create 3 bulk drug parks in India. The scheme will be implemented through a State Implementing Agency (SIA), a legal entity, set up by the concerned State Government.

The scheme for Promotion of Medical Devices Park, which has been approved by the GoI on March, 20, 2020 was launched with an outlay of Rs. 400 Crore for a period of 4 years i.e. from FY2020-2021 to FY2024-2025 to create Four Medical Device Parks in India. The Scheme will be implemented through a State Implementing Agency (SIA).

-Eligibility: Any company registered in India and possessing a minimum net worth including group companies) of Rs.18 crore (30% of threshold investment of first year) is eligible for the scheme

-Target Segments: There are four target segments under the scheme which are as follows:

The PLI scheme for promotion of domestic manufacturing of Key Starting Materials (KSMs)/Drug Intermediates (DIs) / Active Pharmaceutical Ingredients (APIs) in India was launched with an outlay of Rs 6,490 crore for a period of 9 years i.e. from FY 2020-21 to FY 2029-30. The list of 41 products is contained in the scheme guidelines which will enable domestic production of 53 bulk drugs.

-Eligibility: The Net Worth of the Applicant (including that of Group Companies), as on the date of application, shall not be less than 30% of the total proposed investment.

The centre has constituted a 11 member high-level committee to “simplify and expedite” the drug approval process in India. The committee chaired by Rajesh Bhushan, Officer on Special Duty, Ministry of Health was set up by the Ministry of Health and Family Welfare(MoHFW) on May 11 as a measure to reform the drug regulatory system in India.