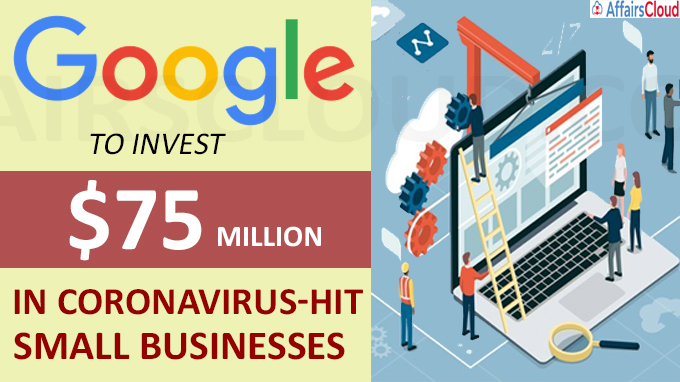 Google has partnered with European Investment Fund (EIF), Inter-American Development Bank(IDB) and Kiva, an organisation that crowdfunds loans to unlock capital for the underserved around the world to invest  $75 million(about Rs. 545 crore) to small and medium-sized companies outside U.S who are suffering from the impact of COVID-19.

i.The funds are part of $800 million (about Rs. 5,820 crores)commitment announced by Google in March 2020 to support small businesses in response to COVID-19 pandemic.

ii.Google also plans to invest $15 million in India to support the small and micro enterprises across the country.

ii.Google will invest in two EIF funds and becomes the 1st company to do so.

i.$15 million(about Rs. 110 crores) in loan capital- Will support over 1000 European small businesses

It  is a part of the European Investment Bank group.

Its central aim is to support Europe’s micro, small and medium-sized businesses by helping them to access finance.

In latin America, Google allocates $8 million (about  Rs. 58 crores)  to enhance the capital available in the region for small businesses.

This is done with the help of  a long-term partnership with the IDB through its innovation lab.

In Africa, the Middle East and Indonesia, Google has established a $26 million(about  Rs. 190 crores)  loan initiative with Kiva.

Separately, Google is giving a $1 million grant to Kiva to build its capacity for their local partnerships and research the impact of this program.

On 13 July, Alphabet Inc. & Google Chief Executive Officer Sundar Pichai had announced an investment of $10 billion (Rs 75,000 crore) in India through the “Google for India Digitisation Fund” at the 6th Annual, Google for India Event 2020 and also a First virtual event of Google in India.