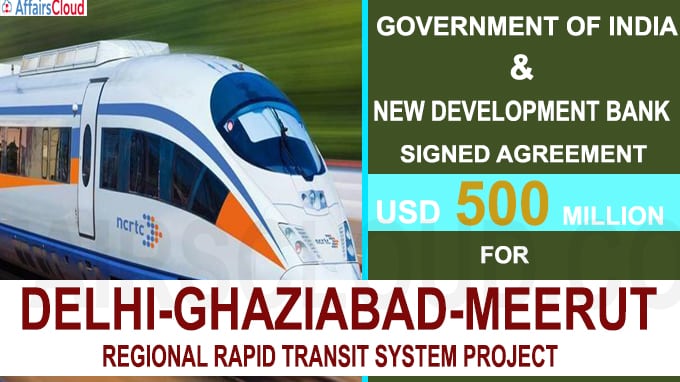 The loan will be used for construction of a 82.15 kms length (68.03 kms elevated and 14.12 km underground) RRTS Corridor connecting Delhi, Ghaziabad and Meerut.

To Develop an efficient and sustainable regional transport system to reduce traffic congestion in Delhi.

i.The loan from NDB has a tenor of 25 years with an 8-year Grace period.

ii.The MoHUA,Government of India is the Executing Agency & NCRTC will be the Implementing Agency.

iii.RRTS has been designed for a speed of 180 km per hour, and will reduce travel time between Delhi-Meerut to 1 hour.

iv.It is expected to be completed by August, 2027.

NCR is among the world’s largest urban agglomerations and a major economic centre of India.

i.Due to lack of efficient public transportations in NCR around 63% of people use Private Vehicles for commuting.

ii.This has led to increased traffic congestion and has also made it as one of the most polluted regions in the world.

iii.NCR is projected to become the most populous urban agglomeration by 2030 which will increase pressure on basic infrastructures such as housing, water supply, electricity and Transport.