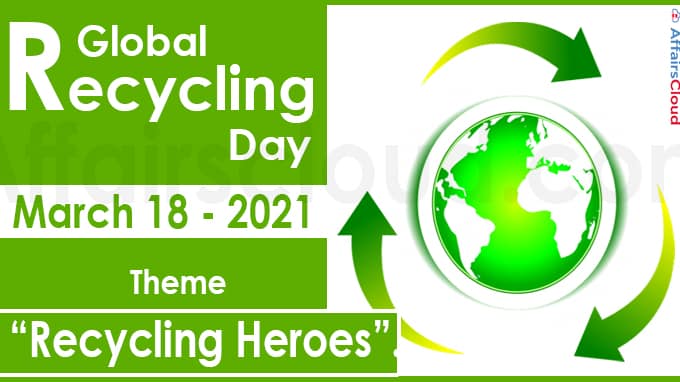 Global Recycling Day is annually observed across the globe on 18th March to promote the importance of recycling across the globe. The day calls for the world to work together to change the mindset of governments, business, communities and individuals across the globe to consider recyclables as resources.

The theme of the Global Recycling Day 2021 is “Recycling Heroes”.

The theme of 2021 recognises the people, places and activities which showcased the importance of recycling towards an environmentally stable planet.

ii.The Global Recycling Foundation, run as an independent organisation with an aim to promote and support the global recycling industry and to showcase the importance of recycling towards preserving the future of Earth.

iii.The Global recycling day was initiated by the BIR and supported by Global Recycling Foundation and the United Nations Industrial Development Organization,

i.Every year, the recyclables, the “7th Resource”, save over 700 million tonnes in carbon emissions and it is estimated to increase to 1 billion tons by 2030.

ii.The process of recycling is a vital part of the circular economy which helps to protect natural resources.

ii.India recycles around 95% of e-waste through the network of informal waste pickers.

iii.It is estimated that around 60% of the plastic waste in India are recycled.

BIR was the first federation to support the interests of the recycling industry on an international scale.