Global Hunger Index is a multidimensional measure that describes the state of hunger situation on regional, national and global level. 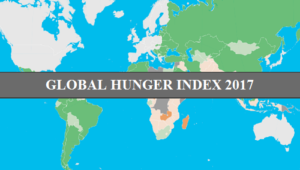