On March 5, 2020, According to the ‘Freedom in the World 2020” report, which analyzes ​​democratic values ​​and people’s freedom in 195 countries & 15 territories and ranks them category-wise, released by the Freedom House, a U.S (United States) -based watchdog that conducts research and advocacy on democracy, India has ranked 83rd  in the report along with Timor-Leste and Senegal in ‘Free’category. While, Finland topped the list as the free democratic country.The report derives its methodology from the Universal Declaration of Human Rights, adopted by the United Nations General Assembly in 1948. 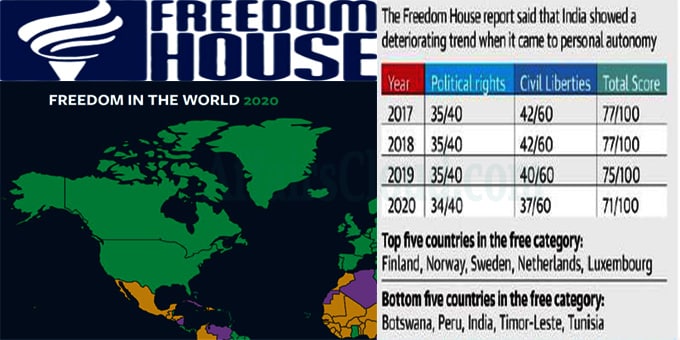 i.India’s score fell by 4 points from 75 to 71 in the survey results (34 out of 40 points in the political rights category & 37 out of 60 in the civil liberties category).This is the biggest drop in the 25 largest democracies in the world.

ii.The report, which considers Jammu and Kashmir (J&K) as a separate category of Indian Kashmir, has reduced the its score from 49 to 28.It has also been removed from the category of ‘Partially Free’ and placed in the ‘Not Free’ category.

India has long been viewed as a democratic force capable of confronting China & was a strategic partner of the US. But the outlook is now changed as it is likely to face criticism such as that of China.

The report compares the anti-Muslim actions of the central government with those of the Uighurs and other Muslim in China. In 2019, Chinese officials have explicitly opposed Chinese government’s atrocities against Uighur Muslims and other Muslims in front of international agencies. Similarly, the Modi government has been critical of the Hindu nationalist practices that are affecting Muslims across India.

The report also accused the central government of banning internet in Kashmir, the largest internet ban ever implemented by a democratic state.

Here’s the list of Top 3& Bottom 3 nation in free category of the report: