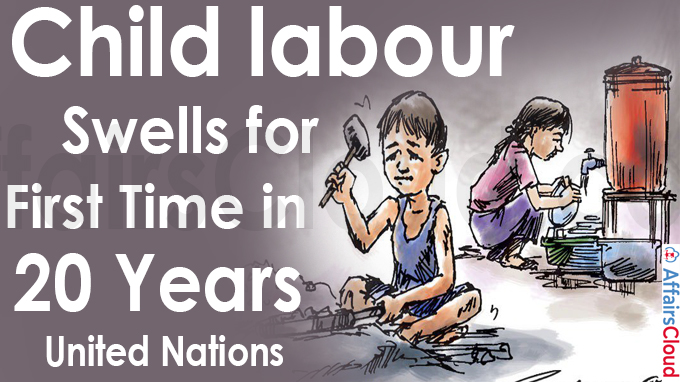 According to the ‘Child Labour Global Estimates 2020, trends and roads forward’ released by United Nations Children’s Fund (UNICEF) & International Labour Organization (ILO), for the 1st time in two decades, 160 million children (63 million girls and 97 million boys) were in child labour globally at the beginning of 2020, accounting for almost 1 in 10 of all children worldwide.

i.The report highlights the significant rise of children working between the ages of 5-11. This age group accounts for just over half of the total global figure (160 million).

ii.Number of children in the age group 5-17, who are working in hazardous places, which is likely to harm their health, safety or moral well-being has increased by 6.5 million since 2016 to 79 million.

Key Findings of the report

Measures to improve the situation

The report calls for adequate social protection, including universal child benefits; increased spending on quality education and getting all children back into school, including those forced out before COVID-19; and investment in child protection systems, rural public services and livelihoods to stop the upward trend in Child Labour.

March 23, 2021, According to the report  ‘Reimagining WASH:Water Security For All’ released by UNICEF, globally more than 1.42 Billion people, including 450 million children live in areas of high, or extremely high, water vulnerability.