On December 18, 2019, Union Minister for Finance & Corporate Affairs Smt. Nirmala Sitharaman has chaired the 38th  Goods and Services Tax (GST) Council Meeting in New Delhi. The meeting was also attended by the Union Minister of State for Finance & Corporate Affairs Shri Anurag Thakur besides Finance Ministers of States & UTs and senior officers of Ministry of Finance. 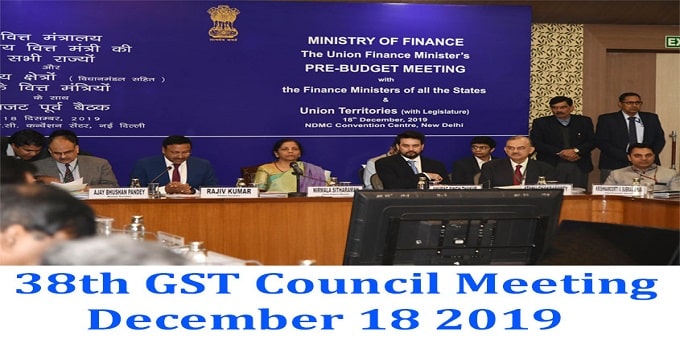 Highlights of the meet:

18 % tax on woven and non-woven bags from 1 March 2020:
The Council also rationalized tax rate to 18 % (from 12%) on bags belonging to HSN code 3923/6305 (woven and non-woven bags and sacks of polythene or polypropylene strips or the like , whether or not laminated, of a kind used for packing of goods including Flexible Intermediate Bulk Containers-FIBC). It will be effective from 1 January 2020.

Late fee waiver on GSTR-1:
GST Council has decided to give exemption from penalty on those who do not fill GSTR-1 from July 2017 till 10th January 2020 through GST amnesty scheme.
GSTR-1: It is a monthly or quarterly return that should be filed by every registered dealer.

GST exemption for the industrial land developers:
The council was also decided to give exemption from upfront amount payable by entities in which the central / state government holds 20 % stake on long-term lease of industrial or financial infrastructure plots. Till now, the exemption is available to an entity having 50% or more ownership of the Central / State Government.
upfront amount :An amount of money paid before a particular piece of work or a particular service is done or received

Formation of GRC at Zonal/State level:
The council decided to constitute Grievance Redressal Committees (GRC) at the regional and state level, which would include officers from both the Central GST and the State GST. Apart from these, representatives of trade and industry will also be involved in this.

Extension of due date for filling GSTR-9 to 31 January 2020:
The due date of GSTR-9 and GSTR-9C for Fiscal year-FY 2017-18 has been extended further till 31 January 2020 from the earlier date of 31 December 2019.
This has been done to give more time for taxpayers to use the offline platform of GSTR-9C that is expected to be made available on 21 December 2019.

GSTR-9: It is a document or statement that has to be filed once a year by a registered taxpayer. This document contains the details of all supplies made and received under various tax heads (CGST, SGST and IGST) during the entire year along with turnover and audit details for the same.

e-way bill will be blocked for Non fillers of GSTR-1:
The council has decided to block e-way bill for those who haven’t filed GSTR-1 for 2 tax periods.

Action for blocking doubtful input tax credit
The council has amend Section 49 of the Goods and Services Tax (GST) law that would allow tax officers to block input tax credit (ITC) of companies if they suspect fraud.

SOP for tax officers in case of non filing of GSTR-3B:
The Standard Operating Procedure (SOP, a set of step-by-step instructions )will  be released for the benefit of tax officers about actions taken for non-filing of GSTR-3B. These will help in blocking of fake ITC claimed.

GSTR-3B :It is a monthly return in which every taxable person has to summarize the details of outward & inward supplies.
The Council also approved various law amendments which will be introduced in Budget 2020

Amid concerns over declining revenue, the central government has set a target of raising Rs 1.1 lakh crore GST collection every month between December 2019 to March 2020.

Presentation on GST revenue trends
A presentation was made by a committee of officers set up to study revenue augmentation.The meet also saw the discussion on a wide range of issues such as measures for encouraging voluntary compliance, expanding tax base, measures to improve return filing and tax collection and rate rationalisation.
Automation measures such as e-invoice, new return system, QR (Quick Response) code on bills were also discussed.

Centre releases Rs 35,298 crore for GST compensation to states due to low revenue collection
Amid growing opposition from the state governments over the delay in payment of GST compensation, the central government on Monday released Rs 35,298 crore to the states. This amount has been paid to cover the loss of revenue collection due to the implementation of Goods and Services Tax (GST).

Background: When GST was implemented on 1 July 2017, the states were promised that the revenue loss would be repaid by the Center. The compensation amount was fixed at 14 per cent of the total revenue received in the base year 2016-17.
On 20 September 2019, the GST Council met last time at its 37th meeting.

About GST:
It is an indirect tax (or consumption tax) imposed in India on the supply of goods and services. Goods & services plaued into 5 different tax slabs for collection of tax .It includes,0%, 5%, 12%, 18% and 28%.