On November 11, 2019 the Federation of Indian Chambers of Commerce and Industry (FICCI) and the Singapore Fintech Association (SFA) signed a Memorandum of Understanding (MoU) for cooperation for development of fintech technology in both the nation. The MoU was signed during the Fourth edition of Singapore Fintech Festival, the world’s largest financial technology platform along with Singapore Week of Innovation and Technology conducted from November 11-13, 2019 in Singapore. 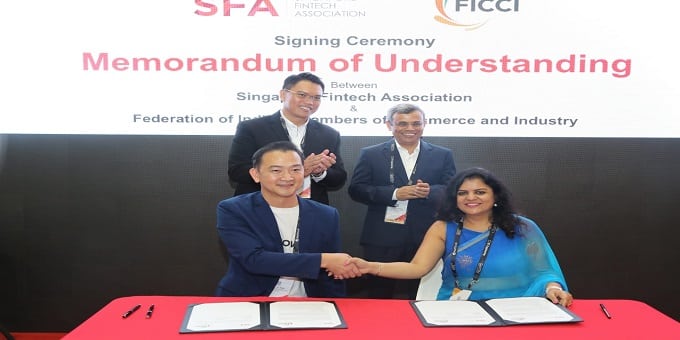 BHIM goes international:
At the festival, soft launch was scheduled for the acceptance of BHIM-UPI QR (Bharat Interface for Money- Unified Payments Interface Quick Response) based payments in Singapore with a live transaction at a merchant terminal. With this transaction, BHIM usage for the first time enters an international country.

About BHIM:
Facts: It is named after Bhimrao Ramji Ambedkar. Recently BHIM 2.0 was launched which provides additional functionalities and also supports three additional languages — Konkani, Bhojpuri and Haryanvi, over and above the existing 13 languages.
Launched- December 2016.