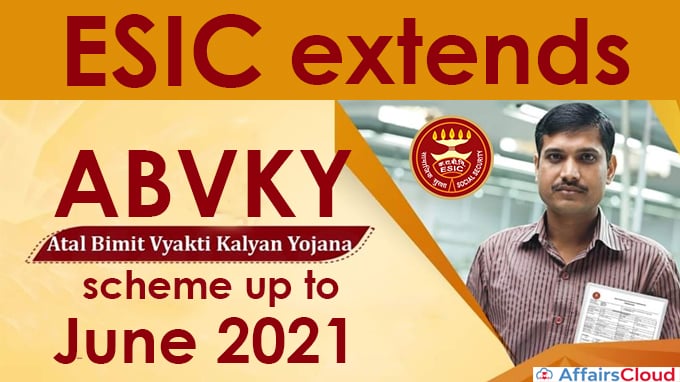 The Employees State Insurance Corporation (ESIC) has extended the “Atal Beemit Vyakti Kalyan Yojana (ABVKY)” by another one year i.e. from 1st July, 2020 to 30th June, 2021 amid COVID-19. It has also relaxed the eligibility conditions for the period between March 24, 2020 and December 31, 2020.

–The insured person should have been in employment for a minimum of two years before his/ her unemployment.

–Claim shall be due 30 days after the date of unemployment.

It is a welfare measure for employees covered under Section 2(9) of ESI Act, 1948, in the form of relief payment upto 90 days, once in a lifetime.  The Scheme was introduced w.e.f. 01-07-2018 on pilot basis for a period of two years initially. Now, it has been extended by 1 year.

i.On 11th October 2020, Prime Minister Narendra Modi launched a physical distribution of property cards, a legal document of owning their houses under the Survey of Villages Abadi and Mapping with Improvised Technology in Village Areas(SVAMITVA) scheme over a virtual platform.