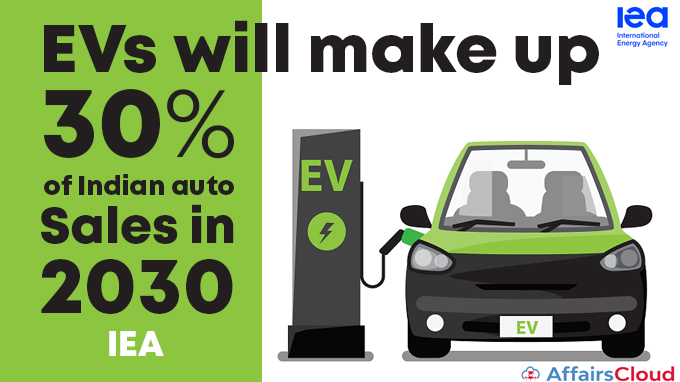 ‘Global EV Outlook 2021’ – the recently released Annual Report of International Energy Agency (IEA) has stated that the sale of Electric Vehicles (EVs) will be more than 30% in new vehicle sales in India by 2030.

i.In order to maintain the rapid growth of EVs, governments across the world need to act on providing charging stations & ban fossil-fuels.

iii.Based on current trends and policies, the report projects the number of electric cars, vans, heavy trucks and buses on road worldwide to reach 145 Million by 2030.

ii.The report highlights the FAME II (Faster Adoption and Manufacturing of (Hybrid) and Electric Vehicles) scheme of the Central Government.

i.It was introduced by Government Of India in 2015 to support electrification of public and shared transportation through subsidies.