On January 22, 2020, According to the 12th edition of the ‘Democracy Index 2019: A year of democratic setbacks and popular protest’, released by the Economist Intelligence Unit (EIU), India has slipped 10 ranks to 51st spot with the score of 6.90 in this index, which provides a blueprint for the current state of democracy in 165 independent states and two territories.
Top & bottom: Norway tops the list with a score of 9.87 while North Korea is at the bottom with 167th place with 1.08 points. 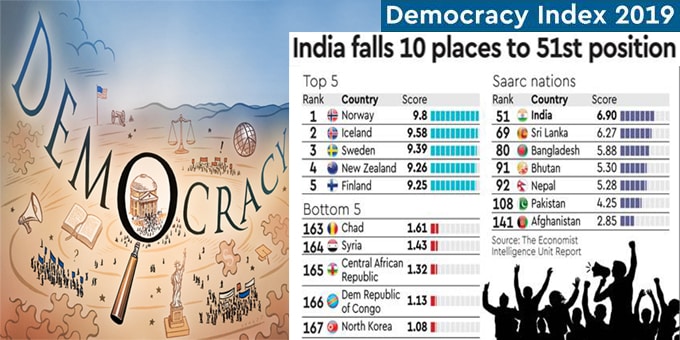 i.India’s score in the year 2018 were 7.23, which has come down to 6.90, the lowest level in 13 years. As per the report, India’s democracy scores have declined due to lack of civil liberties, especially the removal of Article 370 from Jammu & Kashmir (J&K) and the enforcement of the Citizenship Amendment Act (CAA) 2019.

Top 3 & Bottom 3 countries in the Index:

iv.About the Index: The Global Democracy Index is based on 5 categories viz – the functioning of government, election process and pluralism, political participation, political culture and civil liberties.

The EIU started releasing the Democracy Index in 2006.EIU is the research and analysis division of The Economist Group, which is the sister company to The Economist newspaper.