Economic Survey of India is an annual document presented by the Ministry of Finance, Government of India.

The Department of Economic Affairs, Ministry of Finance presents the Survey in the Parliament every year, just before the Union Budget. It is prepared under the guidance of the Chief Economic Adviser of India.

The first Economic Survey of India was presented in 1950-51 as part of the Union Budget. After 1964 it was separated from the Budget and presented each year during the Budget Session before the presentation of the budget.

On the first day of Budgetary session i.e. January 31, 2020, Union Minister Nirmala Sitharaman, Ministry of Finance has presented the Economic Survey 2020-21 in the parliament

Author of Survey: It was authored by Chief Economic Adviser Krishnamurthy Venkata Subramanian, Ministry of finance.

Volume I – to provide evidence based economic analyses of the challenges of policymaking and tools to make it more effective.

Volume II – reviews recent developments in the major sectors of the economy with a focus on the challenges faced due to the pandemic this year.

–It is the first time since independence that the economic survey is presented in paperless form, i.e. in ebook format on advice from health experts amid COVID-19.

The Indian economy will see a “V-shaped” recovery driven by COVID-19 vaccination programme. While there was a 23.9 per cent contraction in GDP in Q1, the recovery has been a V-shaped one as seen in the 7.5 per cent decline in Q2 and the recovery across all key economic indicators. 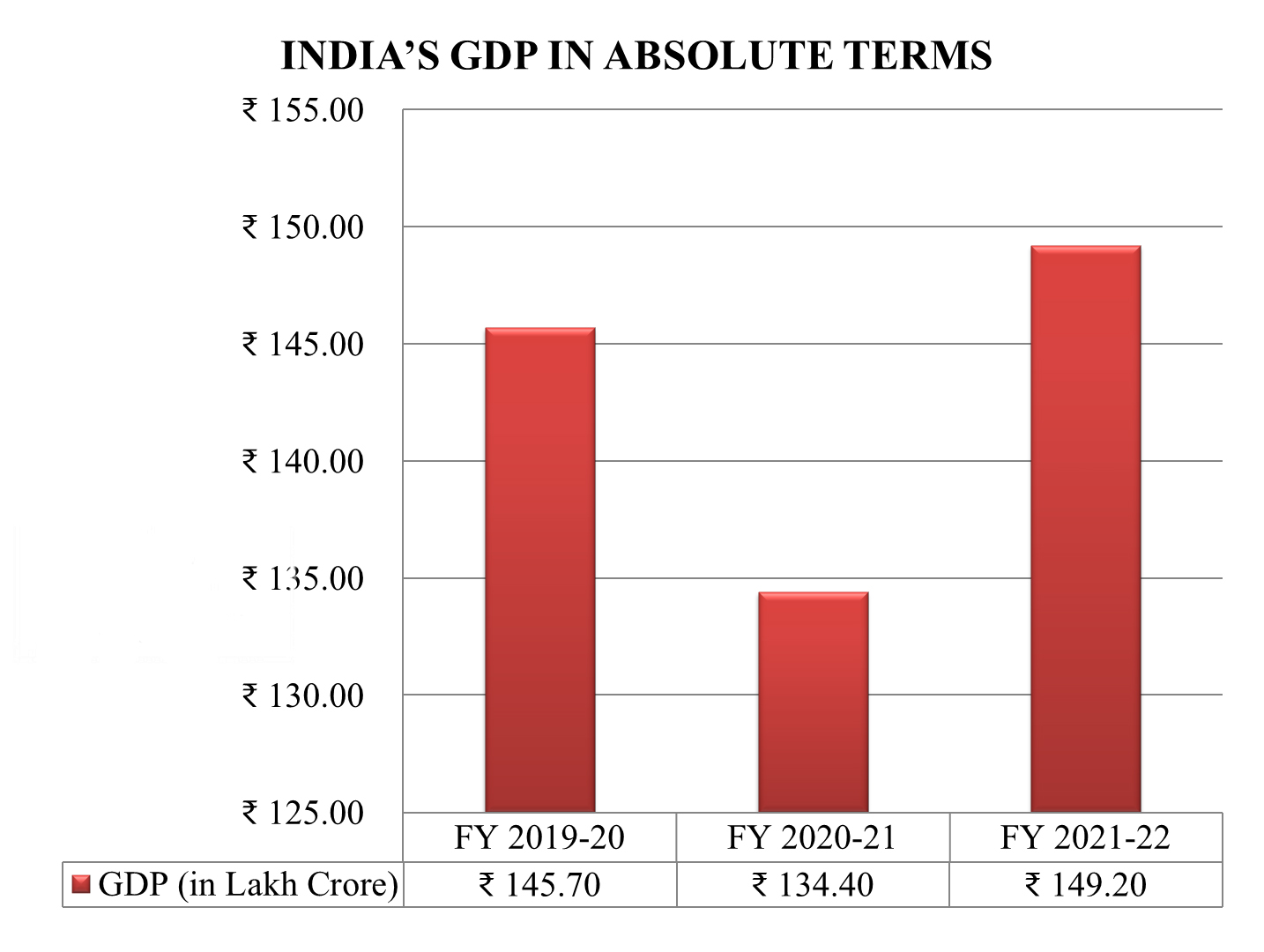 This path would entail a growth in real Gross Domestic Product (GDP) by 2.4% over the absolute level of 2019-20 – implying that the economy would take two years to reach and go past the pre-pandemic level.

CTR earned by the government during the period April to November 2020 fell by 12.6% to Rs10.26 lakh crore. For the year, it is also expected to fall short of the budgeted Rs 24.2 lakh crore.

Service sector are estimated to contract by 8.8% during FY21. 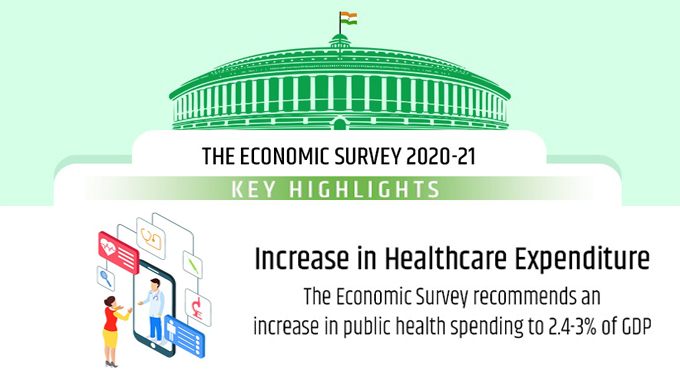 The survey recommended that an increase in health spend from 1% to 2.5-3% of GDP can decrease the out-of-pocket (OOP) expenditure from 65% to 30% of the overall health care spend.

As per the economic survey, 71% of global deaths and about 65% of deaths in India are caused by non-communicable diseases (NCDs). On quality and access of healthcare, India was ranked 145th out of 180 countries according to the Global Burden of Disease Study 2016.

As per World Health Organization (WHO), an aggregate density of health workers is to be 44.5 per 10,000 population.

Impact of PMJAY on Health Outcomes

Pradhan Mantri Jan Arogya Yojana (PMJAY), an ambitious program and a crucial component of the Ayushman Bharat Yojana, launched by Government of India in 2018, to provide healthcare access to the most vulnerable sections, has had a strong positive impact on the healthcare outcomes of those States that have adopted the healthcare scheme. As per the Provisional Estimates of National Income released by Central Statistics Office (CSO)on 29th May, 2020, the share of Agriculture and Allied Sectors in Gross Value Added (GVA) of the country at current prices is 17.8 per cent for the year 2019-20.

India ranked 48th in 2020 Global Innovation Index, as it was the first time entered into top 50 innovating countries by improving its rank from 81 in 2015 to 48 in 2020.India ranks first in Central and South Asia.

India is the third-largest energy consumer in the world after the United States (US) and China but it’s oil production fell by 6% amid COVID-19. It’s indigenous crude oil production declined to 32.17 Million Metric Tonnes (MMT) in FY20 as against 34.20 million metric tonnes in FY19.

A combination of demand and supply side policies under the ambit of ‘Aatma Nirbhar Bharat’ to cushion against the pandemic shock, and subsequently fuel the economic recovery.

The economic survey examines the optimal position of fiscal policy in India during a crisis and concludes that growth itself leads to debt stability, but not vice versa.

This is because debt sustainability depends on the “Interest Rate Growth Rate Differential” (IRGD) i.e. the difference between the interest rate and the growth rate in an economy.

Sovereign credit ratings methodology to be made more transparent, less subjective and better attuned to reflect an economy’s fundamentals.

There was wide variation in states related to Thali costs between June-December, 2020.

The Story of Exports:

As of on January 8, 2021, the foreign exchange reserves rose to an all-time high of $ 586.1 billion due to the various initiatives undertaken to promote exports, including Production Linked Incentive (PLI) Scheme, Remission of Duties and Taxes on Exported Products (RoDTEP), improvement in logistics infrastructure and digital initiatives would go a long way in strengthening external sector in general and exports in particular.

Allocation to Rural Jobs programme highest ever at Rs1.1 tn

“Basic needs” approach to economic development focuses on minimum specified quantities of basic necessities such as food, clothing, shelter, water and sanitation that are necessary to prevent ill health and under nourishment. Bare Necessities Index (BNI) is an attempt to quantify this approach to economic development using data from National Statistical Office (NSO). It is created for all States/Union Territories by employing data at State Level.

Economic Survey 2020-21 presented a Bare Necessities Index (BNI) at the rural, urban and all India level. The BNI summarizes 26 indicators on five dimensions viz., water, sanitation, housing, micro-environment, and other facilities. It has been created for all States for 2012 and 2018 using data from two National Statistical Office (NSO) rounds viz., 69th and 76th on Drinking Water, Sanitation, Hygiene and Housing Condition in India.

To mitigate the effect of COVID-19, Rs. 818.17 crore is allotted to States/UTs to promote online learning through digital initiatives and Rs.267.86 crore for online teacher training under Samagra Shiksha Scheme.

MANODARPAN initiative for psychological support has been included in Atma Nirbhar Bharat Abhiyan.

Around 92 courses have started and 1.5 crore students are enrolled under Swayam MOOCs (Massive Online Open Courses).

PM eVIDYA which is a comprehensive initiative to unify all efforts related to digital/online/on-air education.

The Survey states that India has attained a literacy level of almost 96% at the elementary school level. As per National Sample Survey (NSS), the literacy rate of persons of age 7 years and above at the All-India level stood at 77.7%.

As per the Annual Status of Education Report (ASER) 2020 Wave-1 (Rural), released in October 2020, the percentage of enrolled children from government and private schools owning a smartphone increased enormously from 36.5% in 2018 to 61.8% in 2020 in rural India.

The Economic Survey 2020-21 states that only 2.4 % of the workforce of age 15-59 years has received formal vocational / technical training and another 8.9% of the workforce received training through informal sources. Following are measures taken by government to upgrade skill development:

Services sector accounts for 48% of total exports and it has outperformed goods exports in the recent years. Service sector accounting for over 54% of India’s Gross Value Addition (GVA) and nearly four-fifths of total FDI inflow into India. The sector’s share in Gross State Value Added exceeds 50% in 15 out of 33 States and UTs, and is particularly more pronounced in Delhi and Chandigarh.

Contact-intensive services sector contracted by nearly 16% during the first half of the financial year 2020-21.

World Investment Report 2020 – India has also improved its position from 12th in 2018 to 9th in 2019 in the list of world’s largest FDI recipients.

Computer Software & Hardware sub-sector, where FDI inflows grew by over 336%.

IT-BPM Services: Telecom related regulations were removed from IT-BPM sector and consumer protection regulations were introduced for e-commerce. The IT-BPM Industry has also embraced recent policy reforms, such as relaxation of OSP guidelines and New Umbrella Entity, to drive greater innovation and efficiency.

India’s space sector has grown exponentially in the past six decades. India spent about US$ 1.8 billion on space programmes in 2019-20.

As a result of strong inflows, buoyant Sensex and Nifty resulted in India’s market-capitalisation to Gross Domestic Product (GDP) ratio crossing 100 per cent for the first time since October 2010.

During April-December 2020, equities witnessed an inflow of at USD 30 billion, five times its previous year value – India was the only country among emerging markets to receive equity FII inflows in 2020

India has taken several proactive steps to mainstream the SDGs into the policies, schemes and programmes of the Government.