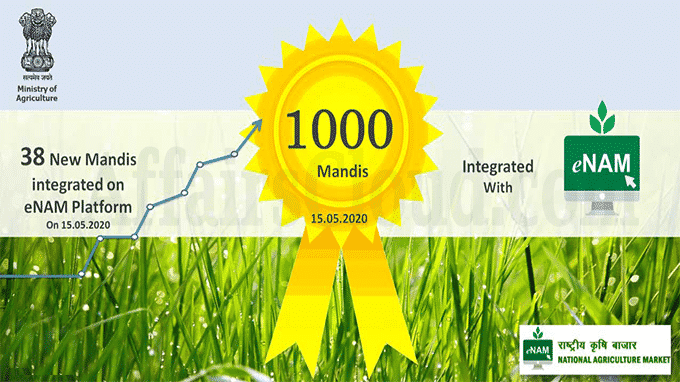 On 15th May 2020, The Ministry of Agriculture announced that the e-NAM reached target 1000 mandis across the nation in 18 states and 3 union territories(UTs) with 38 new mandis integrated with the e-NAM platform of electronic agriculture trading portal.

i.The 38 new mandis include 19 from Madhya Pradesh, 10 from telangana, 4 from Maharashtra and one each in Gujarat, Haryana, Punjab, Kerala and Jammu and Kashmir.

ii.e-NAM launched in 2016 to create a network of Mandis as a common online market platform as ‘one nation, one market’ for agricultural commodities became a tool for social distancing in the global pandemic lockdown.

iii.The states and UTs are promoting the platform to reduce the human intervention in trading and handling of produce online.

i.The e-NAM was aimed to reduce transaction costs, bridging information asymmetries and to help in expansion of market access for the farmers and stakeholders.

ii.e-NAM is implemented by the Small Farmers Agribusiness Consortium under the Ministry of Agriculture and Farmers Welfare.