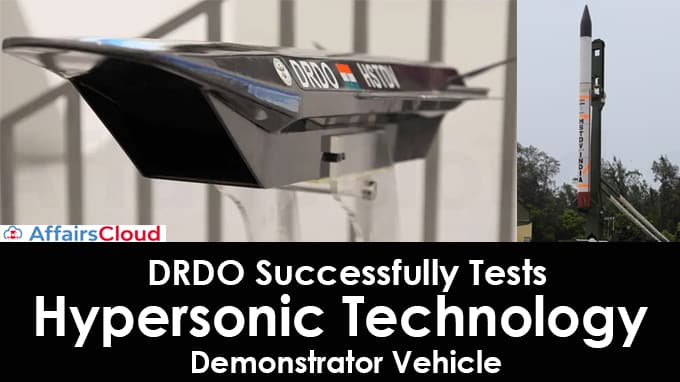 On September 07, 2020, Defence Research and Development Organisation (DRDO) successfully tested Hypersonic Technology Demonstrator Vehicle (HSTDV) using the Indigenously developed Scramjet Propulsion System in its second attempt. The Technology will be very critical as it will play an important part in developing hypersonic cruise missile systems being developed by DRDO.

The HSTDV is designed to cruise at Mach 6 speed (or six times the speed of sound), and the test was conducted from Dr Abdul Kalam Island off the Odisha Coast.

India has joined the elite club of the United States, Russia and China to develop and successfully test Hypersonic Technology.

DRDO had carried out its maiden test of the HSTDV in June, 2019. On that occasion, the Agni-I ballistic carrier vehicle which was supposed to provide the HSTDV with an altitude boost failed.

This achievement will serve as the building block for next-generation hypersonic vehicles in partnership with the domestic defence industry.

i.The technology demonstrator vehicles are launched by the DRDO from time to time to demonstrate the futuristic technologies that may be used in its platforms.

ii.According to the Government, HSTDV can cruise at a speed of mach 6 and move up to an altitude of 32.5 km (20 miles) in 20 seconds. It is capable of travelling over two kilometres per second.

iii.HSTDV has been developed by DRDO with help from the UK, Russia and Israel.

iv.Besides its utility for long-range cruise missiles of the future, the technology will also have multiple civilian applications. It can be used for launching satellites at low cost and for long range missiles.

v.The development is in line with the Government’s flagship Make in India scheme, which aims to boost indigenous development across sectors.

vi.DRDO plans to use HSTDV for longer duration flights, which will lead to the development of re-usable nuclear/conventional weapons delivery platforms.

i.The hypersonic cruise vehicle was launched using a proven solid rocket motor, which took it to an altitude of 30 kilometres (km), the aerodynamic heat shields were separated at hypersonic Mach number.

iii.The parameters of launch and cruise vehicle, including the scramjet engine, were monitored by multiple tracking radars, electro-optical systems and Telemetry Stations.

iv.The scramjet engine worked at high dynamic pressure and at very high temperature. All the performance parameters have indicated a resounding success of the mission.

v.With this successful demonstration, many critical technologies such as aerodynamic configuration for hypersonic manoeuvers, use of scramjet propulsion for ignition and sustained combustion at hypersonic flow, thermo-structural characterisation of high temperature materials, separation mechanism at hypersonic velocities were proven.

ii.It is being developed as a carrier vehicle for hypersonic and long-range cruise missiles, this program is being run by DRDO.

Scramjet is a ramjet engine in which the airflow through the engines remains supersonic (i.e greater than the speed of sound)

Points to be Noted: –

Depending upon the speed of missiles, they are classified into

i.Defence Research and Development Organisation(DRDO) will establish a research cell at Indian Institute of Technology Hyderabad(IIT-H), ‘DRDO – IIT-H Research Cell’ to meet the future defence technological requirements of the country.

ii.The Laser Science & Technology Centre(LASTEC), Delhi-based, laboratory of the DRDO, with assistance of New Age Instruments and Material Private Ltd., Gurugram developed “UV blaster” an ultraviolet(UV) disinfection tower for a quick and chemical-free sanitization of areas that are highly prone to the infection of novel coronavirus in method.