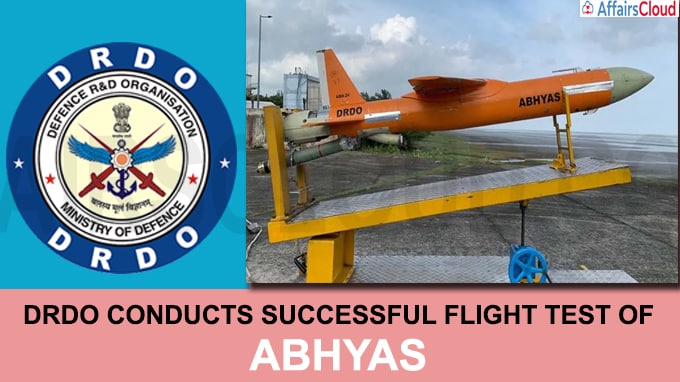 i.The ABHYAS vehicle is a drone and can be used as a target for evaluation of various missile systems.

ii.It can also be used as a decoy aircraft (a deceptive device which is used to draw an enemy away from a more important target).

i.Two demonstrator vehicles were successfully test flown during the trials.

iii.It has Microelectromechanical systems (MEMS) based Inertial Navigation System (INS) for navigation along with Flight Control Computer (FCC) for its guidance and control.

iv.It is programmed for full autonomous flight, and the checkout of the air vehicle is done using a laptop based Ground Control Station (GCS).

During the test, it successfully satisfied the user requirement of 5 km flying altitude, vehicle speed of 0.5 mach, endurance of 30 minutes and 2g turn capability of the test vehicle.

This is the second time that the target vehicle (ABHYAS) was successfully tested. The first successful test was conducted in May 2019.

i.On 24th August, 2020 Renowned Aerospace Scientist Dr G. Satheesh Reddy was given a two-year extension as Chairman of the Defence Research and Development Organisation (DRDO) & as Secretary of the Department of

Defence Research & Development(DoDRD) by the Appointments Committee of the Cabinet.