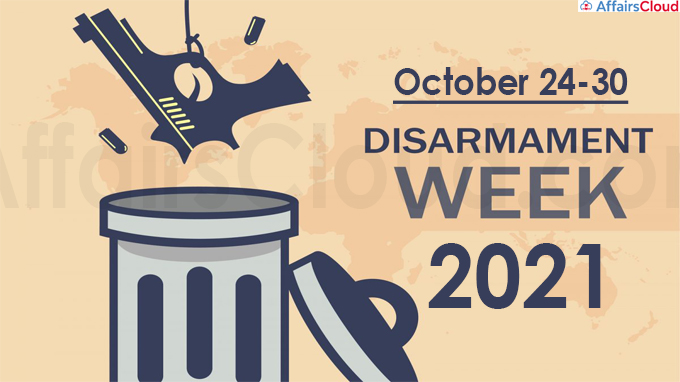 The United Nations(UN)’s Disarmament Week, is a week-long observance, annually observed across the globe starting from the anniversary of the UN establishment, 24th October. The UN Disarmament Week is observed to create awareness about the issues of disarmament in several counties and aims to reduce the use of weapons particularly, nuclear weapons and bring peace to society.

i.The Final Document of the General Assembly’s 1978 special session on disarmament called for the week-long annual observance ‘Disarmament Week’ starting from 24th October the anniversary of the founding of the UN.

ii.In 1995, the UNGA invited the governments and non-governmental organisations to take part in Disarmament Week.

Disarmament is the act of reducing, limiting, or abolishing weapons and it often refers to the total elimination of mass destruction weapons like nuclear weapons.

An Agenda for disarmament:

In 2018, UN  Secretary-General António Guterres launched ‘Securing our Common Future: An Agenda for Disarmament’, outlining a vision of disarmament actions to support sustainable peace and security for all.

four key pillars of the agenda: