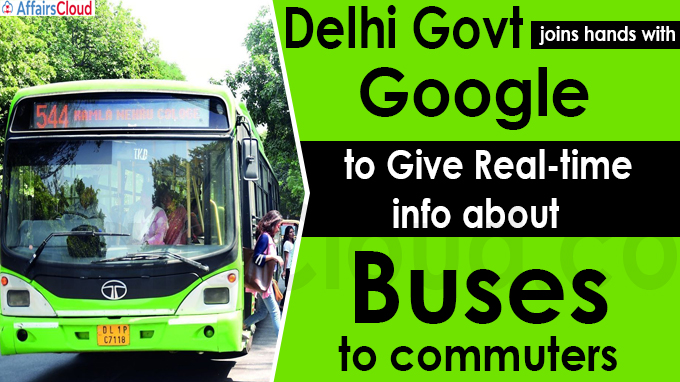 On July 14, 2021, Delhi Transport Ministry in collaboration with Google launched a system to provide real-time information about all public buses of Delhi to the commuters (passenger).

i.The launch would enable commuters to track bus’s static and dynamic locations, arrival, departure, and delay times, bus stops, and routes of 3,000 buses on a real-time basis through their smartphones.

ii.As the facility is also available in the Hindi language, the users could change the language to Hindi by changing settings in Google Maps or within the device.

iii.Through this launch, Delhi is joining the group of global cities where real-time data of all buses is being incorporated onto Google Maps. The Delhi government (govt) also plans to add more Delhi Transport Corporation (DTC) buses in future.

ii.Further in 2018, ONE Delhi App and ONE Card was also developed to enable app-based ticketing for a user to book normal and pink tickets, and passes by scanning a QR code.

i.The Delhi government announced a fellowship programme named ‘Chief Minister’s Urban Leaders Fellowship’ (CMULF) to recruit outstanding young professionals from across the country under the age of 35, who are passionate about public service and willing to work with the Delhi government for 2 years.

ii.Recently, the Delhi Skill and Entrepreneurship University (DSEU) signed an MoU with HI-NO-DE Foundation and Ichishin Holdings Co Ltd, to implement the technical intern training program (TITP) to train, skill, and place the youth of India (especially Delhi) in Japan.

Google Maps is a web mapping platform and consumer application offered by Google in 2005.