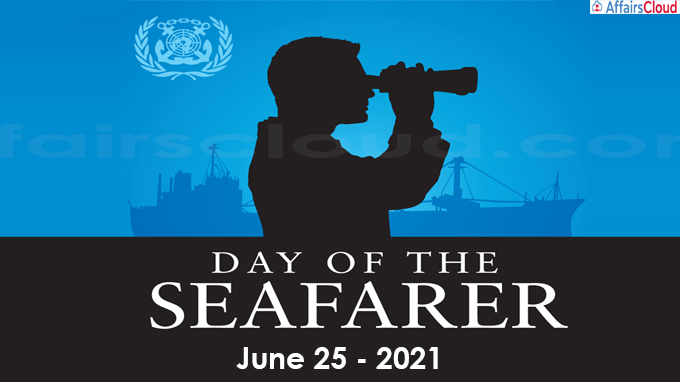 The United Nations(UN)’s Day of the Seafarer is annually observed across the globe on 25th June to recognise the contribution of the seafarers towards the global trade and economy. Objective – The Day aims to create awareness and educate the public about the danger faced by seafarers during sea travel.

The day is celebrated by the International Maritime Organisation(IMO), a specialised agency of the UN responsible for regulating shipping.

i.The Day of the Seafarer was established by the resolution adopted by the Conference of Parties to the International Convention on Standards of Training, Certification and Watchkeeping for Seafarers (STCW), 1978, held in June 2010, in Manila, Philippines.

ii.The establishment of the Day of the Seafarer was proposed by the International Maritime Organisation(IMO) in 2010.

iii.The day of the seafarer has been included in the annual list of United Nations(UN) observances.

iv.The Day of the Seafarer was first observed on 25th June 2011.

i.The 2021 Campaign of the Day of the Seafarer encourages the governments to support the seafarers amid the COVID-19 pandemic and calls for a “Fair Future for Seafarers”.

ii.The campaign will discuss the issues such as fair treatment of seafarers, fair working conditions, fair training, fair safety and others, which will be relevant to seafarers after the pandemic.

iii.#FairFuture4Seafarers will be the hashtag for the campaign.

The IMO was established as Inter-Governmental Maritime Consultative Organization, or IMCO and was renamed as International Maritime Organisation(IMO) in 1982.