Dawit Isaak, an imprisoned Eritrean-Swedish journalist has been chosen for the UNESCO/Guillermo Cano World Press Freedom Prize 2017 dedicated to promoting press freedom. The award is to be presented on May 3, 2017. 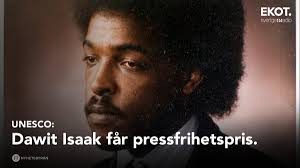 Dawit Isaak is a Swedish-Eritrean playwright, journalist and writer, born on October 28, 1964 in Asmara, Ethiopian Empire.