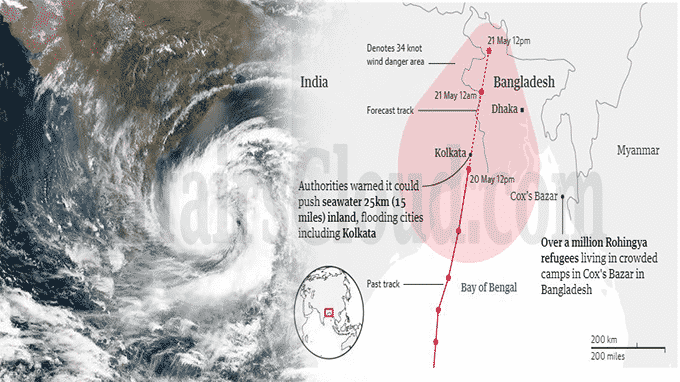 On May 20, 2020, A powerful super-cyclone Amphan, making landfall at 2.30 p.m. between Digha in West Bengal and and Hatiya island in Bangladesh with winds of about 120mph (190km/h), has killed at least 22 people and destroying thousands of homes.

Cyclone Amphan pronounced as ‘um-pun’, Thailand had given the name ‘Amphan’ for this cyclone way back in 2004, first cyclonic storm of 2020 which is expected to be quite severe as per Indian Meteorological Department’s (IMD) latest forecast.

i.Cyclone after 21 years : Super cyclone Amphan has arrived in India after 21 years as in the year 1999, a cyclone hit the coast of Odisha (Tropical Storm B 05 or Supercyclone, 1999). It also caused a huge loss of life and property.

ii.It comes a year after cyclone Fani that battered Odisha on May 3, 2019 and claimed 64lives.

iii.In view of the Amphan, 32 teams of National Disaster Response Force (NDRF) had been deployed in Odisha and West Bengal with PPE (personal protective equipment) due to prevailing coronavirus(Covid-19) scenario.

According to reports, 9 districts of Odisha and coastal districts of West Bengal are affected. In Odisha, Gajapati, Ganjam, Puri, Jagatsinghpur and Kendrapara., while orth and South 24 Parganas, Kolkata, East and West Midnapore, Howrah and Hooghly in West Bengal have been affected.

It is the third super cyclone to occur in the North Indian Ocean region after  cyclone Kyarr in 2019 and Cyclone Gonu in 2007.

i.Many areas have been submerged & Roads, electricity, bridges, communication systems have completely collapsed in many districts of South Bengal. However, earlier, while passing through the Odisha border, Amphun has caused more devastation.

Amphan intensified from a Category-I cyclone to a Category-5 cyclone in less than 24 hours, thus generating higher wind speed in a short duration. Rapid intensification of a storm occurs if maximum sustained wind speed increases by 55 kmph in 24 hours duration.

It is the highest category used by the India Meteorological Department (IMD) to classify tropical cyclones, within the North Indian Ocean tropical cyclone basin between the Malay Peninsula and the Arabian Peninsula.