We are here for you to provide the important Current Affairs September 9 2018 which have unique updates of all daily events from all newspapers such as The Hindu, The Economic Times, PIB, Times of India, India Today, Indian Express, Business Standard, all Government official websites. Our complete current affairs helps you to get more marks in Banking, insurance, UPSC, SSC, CLAT, Railway and all other competitive Exams. Objective:
To encourage ‘Ratings and Rankings’ for educational institutions.
Key Points:
i. The theme of WOSA 2018 was “CHALLENGES AND OPPORTUNITIES IN OUTCOME BASED ACCREDITATION”.
ii. Government will increase the strength of NBA and NAAC so that more number of institutions can be accredited.
iii. The summit focused on the following:

About NBA:
The National Board of Accreditation (NBA) is an autonomous organisation under Ministry of Human Resource Development that assesses the programs offered by the professional and technical institutions in India through accreditation.
About WOSA 2018:
♦ World Summit on Accreditation (WOSA) is a biennial Summit organised by NBA, which provides platform to stakeholders to share their knowledge and information on accreditation.
♦ Earlier, three Summits in 2012, 2014 and 2016 were organized.

‘Mobilise Your City’ agreement signed by India and France for urban planning
On September 9, 2018, India and France have signed an implementation agreement on “MOBILISE YOUR CITY” (MYC) to reduce their Green House Gas (GHG) emissions. iii. This will help in implementing urban mobility plans at local level and help India at national level to improve their sustainable transport policy.
About Mobilise Your City (MYC):
i. It is an initiative supported by the French and the German Governments .
ii. According to this, the European Union agreed to provide funds of Euro 3.5 million through the AFD to provide investments and technical assistance within the Mobilise Your City (MYC) programme in India.
iii. Launched in 2015.
France:
♦ Capital: Paris.
♦ Currency:  Euro.
♦ President: Emmanuel Macron.
♦ Prime Minister: Edouard Philippe.
Nickname:
♦ Paris: City of Lights, City of Love.

Panel of secretaries into look e-commerce issues chaired by Secretary of DIPP.
On September 9, 2018, government set up a panel of secretaries for the 2nd draft e-commerce policy.
i. This would be chaired by Secretary of Department of Industrial Policy and Promotion (DIPP): Ramesh Abhishek.
ii. The other members of the group include: secretaries of the ministry of electronics and information technology, department of commerce, representatives of NITI Aayog and department of economic affairs.
iii. It would revisit the initial draft of e-commerce that states the following:

Hazratganj Chauraha of Lucknow to be renamed as Atal Chowk after former PM
On September 9, 2018, the Lucknow Municipal Corporation in its meeting decided to rename the Hazratganj Chauraha-the city’s biggest intersection, as ‘Atal Chowk’ after  former Prime Minister Atal Bihari Vajpayee.
i. It is also referred as ‘the heart of the city’.
ii. Along with this a memorial for the late veteran leader would also be made named: “Atal Smriti Upvan”.
iii. It will house his statue along with his 51 poems, speeches and other memorabilia.

39th ‘Sarala Puraskar’ award to be given to Odia poet Satrughna Pandav for his poetry collection ‘Misra Dhrupad’
On September 9, 2018, the Sarala Puraskar Committee announced that it would honor noted Odia Poet Sri Satrughna Pandav with the 39th ‘Sarala Puraskar’ award at a special function on 26th October, 2018.
Eminent novelist of India, Sri Govind Mishra will be the Chief Guest of the Sarala Award function.
i. He has been chosen for this honor for his poetry collection ‘Misra Dhrupad’.
ii. This award consists of a cash award of Rs. 5,00,000/- along with a citation.
iii. Other than that, other awardees are:

iv. Both of them belong to the field of music and art and they will each receive a cash award of Rs. 1,50,000/- and citations.
About ‘Sarala Puraskar’ award:
♦ It was instituted by eminent Odia industrialist Late Dr. Bansidhar Panda and Late Mrs. Ila Pnada in the year 1979.
♦ It is awarded by Indian Metals Public Charitable Trust( IMPaCT).
♦ It aims to recognize and glorify Odia literature.
♦ Other related award given by IMPaCT is: The Ekalavya Award  for young talents.

i. He will replace Shikha Sharma the current MD & CEO who will leave office on December 31.
ii. He will take over as MD & CEO for 3 years from January 1, 2019 till December 31, 2021.
iii. He has been associated with HDFC Standard Life since January 2010 and had held senior management positions in Bank of America, Calyon Bank and Infosys BPO.
Background:
i. On December 2017, Axis bank board had decided to reappoint Sharma as the MD & CEO, for a period of three years, till June 2021.
ii. RBI’s disapproval over her re-appointment caused her to step down from her position.
Axis Bank:
♦ Headquarters: Mumbai.
♦ Director: Shri. S. Vishvanathan.
HDFC Standard Life Insurance:
♦ Headquarters: Mumbai.
♦ Non-Executive Chairman: Mr. Deepak S Parekh.
♦ Related News of HDFC: HDFC Banks’s Deputy MD : Paresh Sukthankar resigned on August 10, 2018. i. It is an orange-coloured prototype space suit developed at Vikram Sarabhai Space Centre in Thiruvananthapuram.
ii. It can hold one oxygen cylinder, allowing an astronaut to breathe in space for 60 minutes.
iii. It is a part of ISRO’s Gaganyaan Mission of 2022 involving 3 astronauts.
iv. Along with this, ISRO displayed the crew model and the crew escape model.
v. It has a thermal shield and the temperature inside the capsule will be 25 degrees Celsius.
About Gaganyaan Mission:
i. They will be living for five to seven days in a 400-km orbit from the Earth’s surface as they would conduct micro-gravity experiments.
ii. The capsule will rotate around the Earth every 90 minutes and astronauts will be able to witness sunrise and sunset.
iii. The three astronauts will be able to see India from space twice every 24 hours.
ISRO:
♦  Headquarters: Bengaluru.
♦ Director: K. Sivan.

Eight avian species declared “extinct” in this decade: BirdLife International
On September 9, 2018, according to a new study by BirdLife International, 8 avian species was declared “extinct” in this decade.
i. The study was led by Chief Scientist, Stuart Butchart.
ii. It was carried out to analyse 51 Critically Endangered birds six statistical methods to assign  to the IUCN Red List Category to determine which of them qualify as ‘potentially extinct’ and ‘extinct’.
iii. 5 of the 8 confirmed or suspected extinctions were from the South American mainland due to deforestation resulting in habitat loss.
iv. The species include: 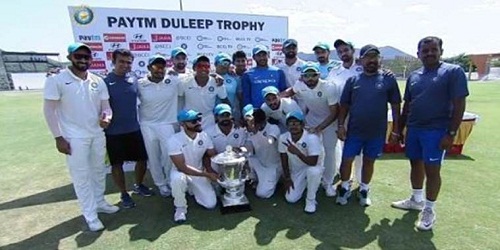 i. They won by an innings and 187 runs.
ii. Himachal Pradesh batsman Nikhil Gangta was named the Man of the Match.
Duleep Trophy 2018-19:
i. It was the 57th season of the Duleep Trophy, a first-class cricket tournament in India.
ii. It took place in NPR College ground in Dindigul from August to September 2018.
iii. There were 3 participants : India Red, India Blue and India Green.
iv. India Red were the defending champions.
v. 4 matches were played : 3 round robins and 1 finals.
vi. Administrator of the Duleep Trophy was : BCCI.
About the Trophy:
♦ It was named after Kumar Shri Duleepsinhji of Nawanagar (also known as “Duleep”).
♦ First tournament was held in 1961-62.
♦ Since 2016-17 it has been played by teams chosen by BCCI selectors representing geographical zones of India.