We are here for you to provide the important current affairs September 6 2018 which have unique updates of all daily events from all newspapers such as The Hindu, The Economic Times, PIB, Times of India, India Today, Indian Express, Business Standard, all Government official websites. Our complete current affairs helps you to get more marks in Banking, insurance, UPSC, SSC, CLAT, Railway and all other competitive Exams. i. The next 2+2 meeting is to be held in the United States in 2019.
Objective:
Strengthening the Defence and Security Partnership.
Key Points:
i. The following took place in the meeting:

Other News:
i. US announced its support for India’s membership into the Nuclear Suppliers Group.
ii. India welcomed the recent U.S.-North Korea summit.
iii. United States welcomed India’s accession to the Australia Group, the Wassenaar Arrangement, and the Missile Technology Control Regime.
iv. US acknowledged India’s economic assistance to Afghanistan.
v. US decided to elevate India to STA Tier 1 status for access to advanced technologies, especially in the defence field.
US:
♦ Capital: Washington D.C.
♦ Currency: US Dollar.

i. The National Mission aims to promote inclusiveness, transparency and efficiency in public procurement and bring cashless, contactless and paperless transaction.
ii. It will increase overall efficiency and cost saving on government expenditure in procurement.
iii. A 6-week special drive is conducted from 6th September to 15th October 2018, where the mission will be launched at state headquarters by Chief Ministers.
iv. GeM offers online, end to end solution for procurement of commonly used goods and services for all Central Government Departments and State Governments, Public Sector Units and affiliated bodies. It completed 2 years on 26th of August 2018. Objective:
To showcase innovation and strengthen the business relations between the two countries.
Key Points:
It was inaugurated by inaugurated by the Maharashtra Chief Minister Devendra Fadnavis.
Union Minister of Commerce and Industry and Civil Aviation Suresh Prabhu delivered the key note address.
i.The theme of the summit is ‘US and India connecting our future’ .
ii.This is the first time that US India Business Council (USIBC) is holding its annual general body meeting in India. It plans to hold its summit every alternate year in India.
iii.It will feature multiple sessions with business executives, policymakers, and thought leaders in a dynamic and interactive two-day conference
iv.It will serve as a platform for networking and B2B engagement and main focus would be on investment, technology and collaboration.
v.It was held on the sidelines of the maiden 2+2 India-US dialogue in New Delhi on September 6.
Other news :
i.Along with the Summit, on September 6, 2018, the 43rd Annual General Meeting will take place.
ii.It will bring together leaders from business, government and society for an exchange of ideas on the future of U.S.-India connectivity.
US India Business Council (USIBC):
Headquarters: Washington D.C. i. These will help pilgrims and tourists to attend the Kumbh which will be held on the banks of Sangam in 15th January 2019.
ii. The website is: www.kumbh.gov.in . It will provide details about location, trains, accessibility, weather and accommodations.
iii. The railway Minister directed officials to use 100 racks of different trains for promotion of Brand Kumbh.

Rs. 80.37 Crores worth developmental projects sanctioned by Tourism Ministry under Swadesh Darshan in Kerala
On September 6, 2018, Minister of State for Tourism (I/C) Shri K.J. Alphons announced the sanction of Rs. 80.37 Crores for “Development of Rural Circuit: Malanad Malabar Cruise Tourism Project’ in Kerala under Swadesh Darshan Scheme.
About the Project:
i. The project focuses on development of water based thematic cruise experiences in and around Valapattanam and Kuppam Rivers of Kannur District.
ii. It consists of three thematic cruises :

iii. The project would develop basic infrastructure facilities like:
Passenger Terminals, Boat Terminals, Jetties, Boat Race Gallery, Restaurants, Food Courts etc.
Background:
Kerala has 44 rivers and the total length of the navigation route in the Kerala is 1900 km.
About Swadesh Darshan Scheme:
♦ ‘Swadesh Darshan’ (tour of country) is a flagship scheme of the Ministry of Tourism for the development of thematic circuits of 13 cities in the country in a planned and prioritised manner.
♦ It was launched in 2014-15.
Kerala:
♦ Capital: Thiruvananthapuram.
♦ Chief Minister: Pinarayi Vijayan.
♦ Governor: Palanisamy Sathasivam. 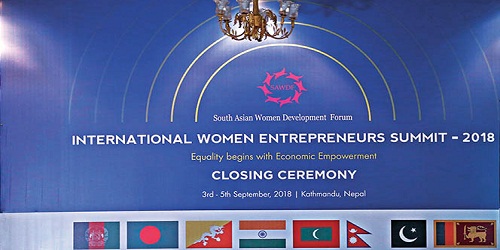 i. The theme of the 3-day event was “Equality begins with Economic Empowerment”.
ii. It was organized by the South Asian Women Development Forum.
iii. The main objective of the summit is to bring together achievers, women business leaders, professionals etc to focus on innovative economic transformation through discussions and collaborations.
iv. Delegates from the SAARC, ASEAN, EU, Africa, Arab countries and China participated in the summit.
South Asian Women Development Forum:
♦ Headquarters: Kathmandu, Nepal.
♦ It is first SAARC Recognized Body organisation working on women entrepreneurs issues. i. On behalf of India, Trade Promotion Council of India (TPCI)  with the support of Ministry of Commerce and Industry and delegation of 42 Indian businessmen related to food and beverages industry took part in it.
ii. This provided a platform for them to explore export opportunities, joint ventures, technology transfers and marketing tie-ups with other nations including South Africa.
iii. Further, TPCI will be participating in similar events in Turkey, Mexico, Saudi Arabia and Spain in the coming months.
Background:
Food & Drink Technology Africa (FDT-Africa) – held biennially in Johannesburg – is the premier beverage and food event in Southern Africa.
TPCI:
Headquarters: Delhi. 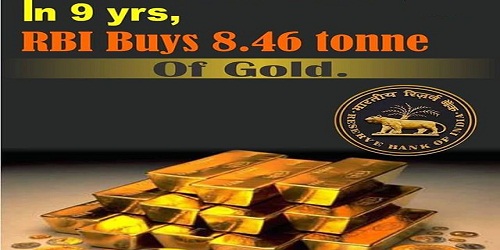 i. This is the first purchase in almost nine years.
ii. RBI now has 566.23 tonne of gold in this year.
iii. Earlier in November 2009, RBI had bought 200 tonne of gold from the International Monetary Fund (IMF).
iv. The value of gold held as asset of Banking Department rose by 11.12% due to the depreciating value of rupee against dollar.

Lockheed Martin, Tata JV collaborate to make F-16 jet wings in India by TASL
On September 6, 2018, Maryland-based Lockheed Martin announced that the wings of F-16 Block 70 fighter jets will be produced in India as a part of Make in India‘ initiative. i. It entered into an agreement with Tata Advanced Systems Limited (TASL) for the production of the wings.
ii. Further partnership on building the C-130J [Super Hercules airlifter] and S-92 [helicopter] has been made between the 2 firms.

India, France to collaborate on human space mission of ISRO
On September 6, 2018, India and France announced a working group for Gaganyaan, ISRO’s first manned mission at the sixth edition of Bengaluru Space Expo.
i. India plans to send three humans to space before 2022.
ii. ISRO and CNES, the French space agency, will be combining their expertise in fields of space medicine, astronaut health monitoring, life support, radiation protection, space debris protection and personal hygiene systems for the mission.
iii. ISRO plans to conduct experiments on microgravity through its astronauts.
About the collaboration:
i. They will focus on : 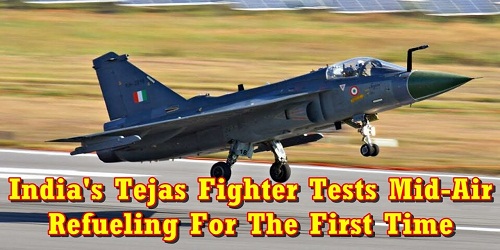 i. Dry link up means no fuel was transferred between the 2 aircrafts.
ii. The tanker was launched from IAF’s base in Agra while LCA Tejas fighter was launched from Gwalior.
iii. Nine more tests will be held including  the  wet tests where the actual transfer of fuel will take place.
About the Tejas MK I fighter jet:
i. The fighter jet is a part of the ‘Flying Daggers’ of the 45 Squadron.
ii. It has been designed by the Aeronautical Development Agency (ADA) and manufactured by Hindustan Aeronautics Limited (HAL).
iii. The IAF has 40 Tejas Mk1 fighters on order and will acquire another 83 Tejas Mk-1A fighters.
iv. Each Tejas Mk-1A will be Rs.463 cores.
HAL:
♦ Headquarters: Bengaluru.
♦ CMD: R. Madhavan.
ADA:
♦ Headquarters: Bengaluru.

Japan to test mini ‘space elevator’
Japanese researchers have developed a “space elevator”. Its first trial will be conducted on 11th September 2018, by launching a miniature version on satellites.
i. The test equipment has been developed by researchers at Shizuoka University. It will be launched on an H-2B rocket by Japan’s space agency from Japan’s Tanegashima Space Center.
ii. The miniature elevator is 6 cm long, 3 cm wide, and 3 cm high. It will move along a 10-metre cable suspended in space between two mini satellites.