We are here for you to provide the important Current Affairs September 14 2018, which have unique updates of all daily events from all newspapers such as The Hindu, The Economic Times, PIB, Times of India, India Today, Indian Express, Business Standard, all Government official websites. 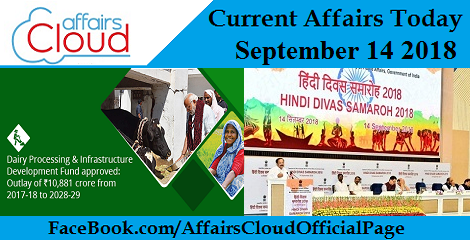 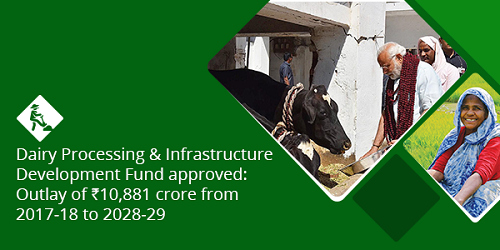 i. This was done in the inauguration of Dairy Processing & Infrastructure Development Fund (DIDF) in New Delhi.
Objective:
To help double the income of dairy farmers.
Key Points:
i. The DIDF was started by the Department of Animal Husbandry, Dairying and Fisheries (DADF) as per the announcement of Union Budget 2017-18.
ii. This is a part of the National Action Plan (Vision-2024) which requires Rs 51,077 crore for operationalization.
iii. Out of the  Rs 10881 crore,  the first installment of Rs 440 crore was being given to the National Dairy Development Board (NDDB).
About the Scheme:
i. Employment: 95,00,000 farmers in about 50,000 villages will be benefitted with direct and indirect employment.
Creation of:

ii. Milk cooperatives will be provided financial assistance of Rs 8004 crore in the form of a loan at 6.5% interest for 10 years.
iii. Also a provision of interest subsidy on loans has been made.
Achievements:
Till now, 15 sub-projects with total approved outlay of Rs 1148.61 crore pertaining to States namely, Karnataka (Rs. 776.39 crore – 5 sub-projects), Punjab (Rs.318.01 crores – 4 sub-projects) and Haryana (Rs. 54.21 crore – 6 sub-projects) have been sanctioned so far.
Other News/Announcements:
i. Implementation of the World Bank-funded National Dairy Plan Phase-I scheme is underway by the NDDB in 18 states.
ii.Under Rashtriya Gokul Mission, 20 Embryo Transfer Technology (ETT) centers are being set up for the production of high genetic merit bovine bulls.
iii.INDUSCHIP has been developed for genomic selection of indigenous breeds and 6000 dairy animals have been genetically evaluated using INDUSCHIP.
About Rashtriya Gokul Mission:
It is a focussed project under National Programme for Bovine Breeding and Dairy Development, with an outlay of Rs 500 crore during the 12th Five Year Plan.20 Gokul Grams are also being established under this scheme. Launch Year: December 2014.
About National Dairy Plan:
National Dairy Plan Phase I (NDP I) is a Central Sector Scheme for a period of 2011-12 to 2018-19. NDP I will be implemented with a total investment of about Rs.2242 crore.

Government prohibits manufacture, sale or distribution of 328 Fixed Dose Combinations drugs for human use
On 7th September 2018, Ministry of Health and Family Welfare prohibited the manufacture, sale or distribution of 328 Fixed Dose Combinations (FDCs) for human use with immediate effect.
Key Points:
i. It has also restricted the manufacture, sale or distribution of 6 other FDCs subject to certain conditions.
ii. The prohibition has been made with reference to section 26A of the Drugs and Cosmetics Act, 1940.
iii. FDCs are two or more drugs combined in a fixed ratio and made into a single dosage form.
Background:
i. On 10th March 2016, Central Government prohibited the manufacture, sale and distribution of 344 FDCs for human use, and further prohibited 5 more FDCs.
ii.Affected manufacturers appealed in several High Courts and the Supreme Court.
iii. Following, Supreme Court’s judgment given on 15th December 2017, Drugs Technical Advisory Board constituted under section 5 of the Drugs and Cosmetics Act, 1940, submitted a report on these drugs.
iv. Central Government has prohibited these 328 FDCs now, considering the recommendations of Drugs Technical Advisory Board and an Expert Committee it had appointed. i. This is the second project under the Swadesh Darshan Scheme being inaugurated in the country.
ii. Ministry of Tourism in February 2016 Sanctioned Rs. 99.21 Crores.
Objective:
To showcase the state’s rich and diverse tribal culture and traditions to the tourists.
Key Points:
i. The project wil be developed under the Swadesh Darshan scheme.
ii. It will be developed by Chhattisgarh Tourism Board.
iii. The key components for development under the project are:

iv. It covers 13 sites in Chhattisgarh including Jashpur, Kunkuri, Mainpat, Kamleshpur, Maheshpur, Kurdar, Sarodadadar, Gangrel, Kondagaon, Nathiya Nawagaon, Jagdalpur, Chitrakoot and Tirthgarh.
Other News:
Under the tribal circuit theme of the scheme the Ministry has sanctioned 4 projects to Nagaland, Telangana and Chhattisgarh for Rs. 381.37 Crores.
About Swadesh Darshan:
Swadesh Darshan scheme is one of the flagship schemes of the Ministry of tourism, for development of thematic circuits in the country in a planned and prioritised manner. The scheme was launched in 2014 -15 and as on date the Ministry has sanctioned 74 projects worth Rs. 5997.47 Crore to 31 States and UTs.
Chhattisgarh:
♦ Chief Minister: Raman Singh.
♦ Governor: Anandiben Patel.
♦ National Parks: Indravati National Park, Kanger Ghati National Park, Sitanadi National Park.

e-Rythu : digital platform for Andhra farmers launched by Andhra Pradesh & Mastercard
On September 14, 2018, the government of Andhra Pradesh entered into a MOU with Mastercard and launched a mobile platform, e-Rythu (e-farmer in Telugu) enabling small-scale farmers to market their produce at reasonable prices. Tamil Nadu & Centre sign MoU on implementing Ayushman-Bharat with state run CMCHIS
On September 14, 2018, the Tamil Nadu government signed an MOU with the centre to implement Ayushman Bharat along with state’s Chief Minister’s Comprehensive Health Insurance Scheme (CMCHIS).Tamil Nadu is the 30th State to sign up for ABS
i. This association would benefit about 77 lakh poor and vulnerable families in Tamil Nadu.
ii. Additionally, the insurance benefit for all those covered under the state scheme will be increased to Rs 5 lakh as per the National Health Protection Scheme.
iii. It would also include all 8 high-end procedures upto Rs 25 lakh covered under  state-run insurance scheme.
About Chief Minister’s Comprehensive Health Insurance Scheme (CMCHIS):
The Tamil Nadu’s health insurance scheme covers 1.57 crore families and provides coverage of Rs 1 lakh per year for 1,027 procedures, and Rs 2 lakh per year for 154 specified medical procedures.
i. It also has a corpus for treatment of eight high-end procedures.
About Ayushman Bharat – National Health Protection Mission (AB-NHPM):
Ayushman Bharat – National Health Protection Mission is a scheme that was announced by the Union Minister for Finance and Corporate Affairs, Shri Arun Jaitely while presenting the General Budget 2018-19  that will cover over 10 crore poor and vulnerable families (approximately 50 crore beneficiaries) providing coverage upto 5 lakh rupees per family per year for secondary and tertiary care hospitalization. Under this scheme , Rs 1200 crore has been allotted for establishing 1.5 lakh Health and Wellness Centres .  24 new Government Medical Colleges and Hospitals and at least 1 Medical College for every 3 Parliamentary Constituencies and at least 1 Government Medical Collegie in each State of the country.

Bihar cabinet approved scheme to give Rs 1 lakh interim relief among other proposals
On September 14, 2018, Bihar government approved a scheme for providing interim relief of Rs. 1 lakh to those affected by mob violence besides speedy trial of such cases.
i. The scheme provides for an interim relief of Rs one lakh to victims of mob violence within a month of the incident.
ii. to hear such cases at fast track courts to ensure its completion within 6 months was given.
Other News:
i. It also approved a loan agreement with the BRICS New Development Bank for USD 350 million for the purpose of building village roads.
ii. The money would be borrowed under a Multi-Tranche Financial Facility and a loan of USD 45 million would be taken for Tranche.
iii. It also approved:

Siddhi: an app that brings farmers, dealers together developed by DestaGlobal
On September 14, 2018, Sidhhi app has brought over 40,000 farmers and buyers under one roof for developing agri market on the go.
i. It was developed by Mumbai-based agri start up e-commerce company DestaGlobal and was launched in July 1, 2018.
ii. The app is available in English and Marathi.
iii.The offers and services provided by the app: Objective:
For the development of the Far East in logistics, energy, natural resources.
Key Points:
i. The theme of the Forum was ‘The Far East: Expanding the Range of Possibilities’.
ii. The EEF 2018 was organized by the Roscongress Foundation.
iii.There were four main theme blocks:

iv. It was attended by 6,002 delegates and 1,357 media representatives from 60 foreign countries including People’s Republic of China, the Republic of Korea , Mongolia, the USA and the UK & North Korea.
MOUs in the 4th :
220 agreements worth 3.108 billion roubles were signed at the Forum.
Russia:
♦ Capital: Moscow .
♦ Currency: Russian Ruble.

‘Shilp Guru’ & National Awards for 2016 presented to master craft persons by Textile Minister
On September 14, 2018, Union Minister of Textiles Smriti Zubin Irani presented ‘Shilp Guru’ and National Award for the year 2016 at a function held at Raipur, Chhattisgarh.
i. 8 ‘Shilp guru’ and 25 National awards were presented.
Achievements of the handicraft sector:
i. Since 2014, handicraft items worth Rs. 1 lakh 26 thousand crores had been exported from India.
ii. About 17 lakh craft persons had been provided with identity cards since 2016.
Background:
Shilp Guru’ is the highest award in the Handicraft sector in India.
Textile Ministry:
♦ Unoin Minister: Smt. Smriti Zubin Irani.
♦ Minister of State: Shri Ajay Tamta.

Secondary Steel Sector Awards given for contribution to National Economy
On 13th September 2018, Ministry of Steel presented Secondary Steel sector awards for the first time, to 26 mini steel companies at an event in New Delhi.
Secondary Steel Sector Awards:
i. The mini steel companies were honoured for their contribution to the national economy.
ii. The awards were presented by Union Minister of Steel, Chaudhary Birender Singh.
iii. 12 companies were given Gold Certificates and 14 companies were given Silver Certificates for their performance during 2016-17.
iv. Steel is one of the core sectors of Indian economy. India is the 3rd largest steel producer in the world. Steel contributes more than 2% to India’s GDP.
About Ministry of Steel:
♦ Union Minister of Steel – Chaudhary Birender Singh
♦ Minister of State for Steel – Vishnu Deo Sai
♦ Secretary – Binoy Kumar Hindi Diwas:
i. On 14th September 1949, the Constituent Assembly adopted Hindi written in Devanagari as the official language of India.
ii. An event was held on the occasion of Hindi Diwas in New Delhi, in which Vice President M Venkaiah Naidu presented Rajbhasha Kirti Puraskar 2017-18 to chiefs of various departments, Ministries and offices for their remarkable performances in promoting Hindi. Home Minister Rajnath Singh presided over the event.
iii.In 1881,Bihar accepted Hindi as its sole official language, replacing Urdu, and thus became the first state of India to adopt Hindi.