We are here for you to provide the important current affairs may 24 2017 which have unique updates of all daily events from all newspapers such as The Hindu, The Economic Times, PIB, Times of India, India Today, Indian Express, Business Standard, all Government official websites. Our complete current affairs helps you to get more marks in Banking, insurance, UPSC, SSC, CLAT, Railway and all other competitive Exams. 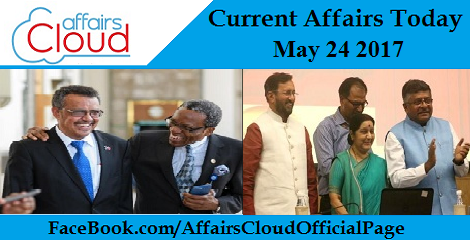 Swachh Bharat App Launched in National Museum
i. “Swachh Bharat App” has been launched in National Museum under Ministry of Culture by the Minister of State (I/C) for Culture & Tourism Dr Mahesh Sharma.
ii. The main focus of this “Swachh Bharat App” is to basically involve people actively to become part of Swachh Bharat Abhiyan (Clean India Movement).
iii. At present, this App is available for Android Mobile phones which can be downloaded from Google Play Store.
iv. The App will be monitored by the Ministry of Culture and will play an important role in cultivating the significance of cleanliness to the citizens.

IIT Kharagpur Signs MoU with Madhya Pradesh For Measuring Happiness Index
IIT Kharagpur’s Rekhi Centre of Excellence for the Science of Happiness has signed a MoU with Madhya Pradesh government’s ‘RajyaAnandamSansthan. It is a Department of Happiness.
Key Notes:
i. The MoU has been signed to collaborate on the development of a Happiness Index for measuring the well-being of the residents of the state.
ii. The Happiness index would be developed by IIT-KGP and the data collected by the state government.
iii. The MoU was signed in the presence of MP Chief Minister Shivraj Singh Chouhan and IIT-KGP Director Prof P P Chakrabarti at Bhopal.
iv. It would be analysed to assess the happiness levels of people of the state and also suggest recommendations enhance happiness levels in the state.
v. India has been ranked at 122 out of 155 countries in the 2017 United Nations’s World Happiness Index (WHI). 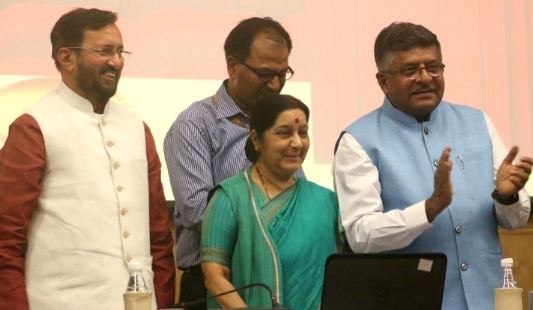 Technology Minister, Ravi Shankar Prasad and Human Resource Development Minister, Prakash Javadekar jointly inaugurated the integration of eSanad with ‘Parinam Manjusha’.
‘Parinam Manjusha’ is CBSE’s digital academic repository which allows students to find their mark sheets and other certificates online.
About eSanad:
i. eSanad is aimed at online verification of the documents with an objective to extend contactless, cashless and paperless document attestation/apostille service to applicants in India as well as abroad.
ii. The integration of e-Sanad with Parinam Manjusha will help the applicants avoid long travels and precious resources of time and money for getting their documents attested by the concerned authorities in States.
iii. It also allows filing the application online.eSanad has been designed and developed by National Informatics Centre (NIC).

The world’s smallest nation, Nauru has ratified the International Solar Alliance (ISA) Framework Pact.
Aaron Cook, Nauru’s Commerce, Industry and Environment Minister handed over the ratification document to Union Finance, Defence and Corporate Affairs Minister Arun Jaitley on May 22, 2017.
♦ The highest point on Nauru’s terrain is only 65 metres above sea level. Thus it is extremely vulnerable to rising sea level due to climate change.
♦ Currently, 30% of the Nauru’s energy needs are met through solar power installations. Its Government has set a target to attain 50% of energy production from renewable sources by 2020.

Start Up India Summit held In UAE
A two-day ‘Startup India Summit’ was held in Abu Dhabi, UAE, on 23rd and 24th May 2017.
i. This summit was held by the Consul General of India (CGI) in Dubai and Embassy of India in Abu Dhabi in partnership with iSPIRIT, a nonprofit think tank and was supported by TiE Dubai, a nonprofit association dedicated to fostering entrepreneurship.
ii. The summit aimed to provide a shared platform for the Startup eco system in both, India and UAE for greater collaboration, exchange of ideas, interaction with academia, investors and industry and for having access to funding from the venture capitalist in the UAE.
iii. 17 Startup companies from India in the space of artificial intelligence, financial technology, digi medicine, health care technology, innovative technology and software services took part in the summit.

Dubai Police recruit UAE’s first ‘Robocop’
The Dubai Police has recuited UAE’s First Robocop. It is used to chase down suspects and nab parking fee dodgers.
Key Points:
i. The Dubai Police director general of smart services Brig Khalid Al Razooqi said this is the official launch of our first Robocop.
ii. With this tool the police can reach the public 24/7.
iii. It is a smart intelligent system and it can easily protect people from crime.
iv. Robocop’s first job posting will be malls and tourist attractions where people can tap a touchscreen on his chest to report a crime, pay traffic fines or chat in Arabic or English.
v. The robot’s built-in cameras will stream video to the police command centre.
vi. Languages such as Russian, Chinese, French and Spanish will be added to Robocop’s vocabulary.

The Reserve Bank of India on 22nd may 2017 had declared that it will reconstitute and expand the oversight committee to deal with rising bad loans.
Key Highlights:
i. The RBI will now reconstitute the Oversight Committee (OC) under its aegis and the two current members will continue in the revamped panel.
ii. The RBI is now developing a framework for an “objective and consistent” decision-making process.
iii. It is framing the process for resolution under the Insolvency and Bankruptcy Code, 2016 (IBC).
iv. The central bank will expand the panel to include more members.
v. The existing OC, which has two members, was constituted by the Indian Banks’ Association.
vi. The RBI will also expand the scope of cases to be referred to the OC beyond those under S4A (Scheme for Sustainable Structuring of Stressed Assets) as required currently.
vii. The RBI is modifying the guidelines on restructuring to resolve the large stressed assets in the banking system.
viii. The banking regulator also sought information on the current status of the large stressed assets from the banks.

IFFCO launches debit card for farmers in collaboration with Bank of Baroda
Bank of Baroda (BoB) has signed a Memorandum of Understanding (MoU) with IFFCO.
Key Highlights:
i. The MOU has signed to launch theirfirst set of co-branded debit cards for the farmers.
ii. This step has been taken to promote more digitalization and cashless economy.
iii. The debit cards has a facility of overdraft of Rs 2,500 in special savings bank account.
iv. It is used for purchase of various agri-products at IFFCO sale counters.
v. Bank of Baroda is engaged in providing various services, such as personal banking, corporate banking, international banking, small and medium enterprise (SME) banking, rural banking, non-resident Indian (NRI) services and treasury services.
Some More Points:
♦ BOB HQ: Vadodara Gujarat
♦ BOB Chairman: P.S. Jayakumar

WHO Elects Ethiopia’s Tedros as First Director General From Africa
On May 23, 2017, Tedros Adhanom Ghebreyesus of Ethiopia was voted as the new Director-General of the World Health Organization (WHO). He is the first African ever to hold this post.Dr Tedros replaces Dr Margaret Chan of China, who has held this post from 2006.
Election of new Director-General of WHO:
♦ As a part of election procedure, six candidates undertook a public campaign for nearly two years.
♦ Voting was held in a closed-door session, during which the health ministers of 186 countries cast their ballots in secret.
♦ At the end of three voting rounds, Dr. Tedros received 133 votes and emerged victorious by beating David Nabarro of Britain who received 50 votes.

Shuva Mundal to succeed Bharat Vasani as Group General Counsel of Tata Sons
Tata Sons has announced the appointment of Shuva Mandal as the Group General Counsel of Tata Sons.
Key Points:
i. Shuva Mandal has succeeded Bharat Vasani.
ii. Mandal will join the company with from July.
iii. Mandal has graduated from the National Law School, Bangalore.
iv. He began his career with legal firm AZB Associates from 2000-15.
v. During his career, Mandal has been actively involved in deal structuring, advising on securities law and development of legal strategy for corporations.

Neil Armstrong’s moon dust bag may fetch $4 mn at auction
An extremely rare bag used by NASA astronaut Neil Armstrong to collect the first dust samples from the Moon may fetch up to USD 4 million at an auction in the US.
Key Notes:
i. The bag brought back to Earth 48 years ago contains traces of the moon dust.
ii. During the Apollo 11 mission, Armstrong collected nearly 500 grammes of material finer than one centimetre (cm), as well as 12 rock fragments larger than one cm.
iii. He collected from five different locations on the lunar surface in the region known as the Sea of Tranquillity.
iv. It will be up for auction on 20th July with a signed photograph of Armstrong’s companion Buzz Aldrin on the Moon and other memorabilia.
v. Scientific tests revealed the dust in the bag to be moon dust, specifically from the Apollo 11 landing site.

Airlander 10, World’s Largest Aircraft, Completes Test Flight
Airlander 10 is the world’s largest aircraft and has successfully completed a test flight by flying for a total of 180 minutes in Cardington, UK.

Key Points:
i. Airlander 10 is hybrid ship and it is a partly plane and partly airship filled with helium gas.
ii. It is 92-metre-long and 43.5m wide.
iii. It can fly at up to 6,100 metres and reach speeds of 148 kilometres per hour.
iv. It combines technology from airplanes, helicopters and airships.

Key Notes:
i. Moore was the third actor to play British secret agent James Bond in seven feature films.
ii. It was released between 1973 and 1985 that were based on the books by Ian Fleming.

Bhattacharya.
Key Points:
i. It discloses the secrets of the cricketer’s consistent form, while attempting to decode his philosophy towards life.
ii. Bhattacharya writes in his book If we focus on Virat, the cricketer and the man, we will find some extraordinary traits.
iii. His leadership skills, the ability to keep his cool under pressure, a fearless attitude and a desire to win every game.