We are here for you to provide the important current affairs March 11 2018 which have unique updates of all daily events from all newspapers such as The Hindu, The Economic Times, PIB, Times of India, India Today, Indian Express, Business Standard, all Government official websites. Our complete current affairs helps you to get more marks in Banking, insurance, UPSC, SSC, CLAT, Railway and all other competitive Exams. 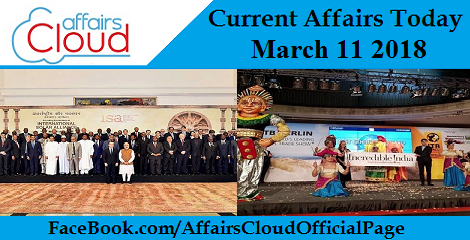 Founding Conference of International Solar Alliance held in New Delhi
The founding conference of International Solar Alliance (ISA) was held on March 11, 2018 in New Delhi.The conference was co- hosted by Indian President Ram Nath Kovind and visiting French President Emmanuel Macron.
i. While addressing the conference, Prime Minister Narendra Modi stated that India has set a target to generate 175 GW of electricity from renewable energy sources by 2022. Out of 175 GW, 100 GW will be generated by harnessing solar energy.
ii. PM Modi also outlined a 10-point action plan to bring about a “worldwide solar revolution”……………………………..Click here to Read more 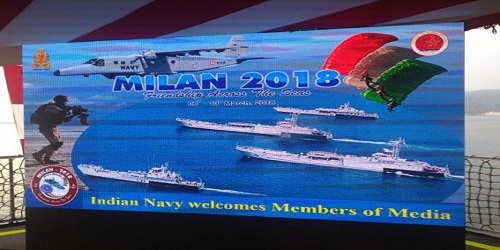 Highlights of ‘MILAN 2018’:
i. Conducted biennially since 1995, MILAN is a congregation of navies of several countries, organised by Indian Navy at the Andaman and Nicobar Islands, under the aegis of the Andaman and Nicobar Command.
ii. Objective behind MILAN 2018 is to expand regional cooperation and combat unlawful activities in critical sea lanes in Indian Ocean region.
iii. Theme of ‘MILAN 2018’ is ‘Friendship Across the Seas’.
iv. Total 28 warships including 17 from India and 11 from Australia, Bangladesh, Indonesia, Malaysia, Myanmar, Singapore, Sri Lanka and Thailand are participating in MILAN 2018.
v. During the course of this event, 39 delegates from 16 countries will deliberate on the regional security situation.
vi.MILAN 2018 will conclude on March 13, 2018.

India’s Biggest M&E Services Market, enTTech 2018 inaugurated in Mumbai
India’s biggest Media & Entertainment Services Market – enTTech 2018 was inaugurated in Mumbai on March 7, 2018.
Highlights of enTTech 2018:
i. enTTech 2018 was organized by Service Export Promotion Council (SEPC) in association with MEAI (Media & Entertainment Association of India) and TVAGA (Telangana VFX, Animation and Gaming Association). The event was supported by the Department of Commerce under Union Ministry of Commerce & Industry.
ii. This edition of enTTech focussed on Business to Business (B2B) matchmaking between 100 international delegates and their Indian counterparts.
iii. The market was held for two days – 7th and 8th March, 2018. Union Minister for Commerce & Industry, Suresh Prabhu spoke at the inaugural function through a video message.
iv. In context of this news, it is important to note that Indian film industry is the world’s largest industry in terms of number of films produced while Indian Television market is the second largest in the world.
Quick facts about Service Export Promotion Council (SEPC):
♦ Formed in – 2006
♦ Set up by – Union Ministry of Commerce & Industry 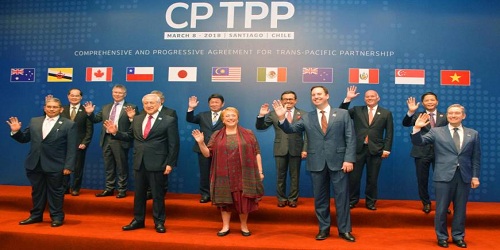 Information about CPTPP:
i. The eleven countries that signed the agreement are Australia, Brunei, Canada, Chile, Japan, Malaysia, Mexico, New Zealand, Peru, Singapore and Vietnam.
ii. The agreement is broadly aimed at lowering both non-tariff and tariff barriers to trade among signatory countries.
iii. The agreement was revised after United States announced its decision to withdraw from the discussions in January 2017.
iv. The eleven countries that have signed CPTPP, together represent 13.5 per cent of the global economy.
v. These countries will now have to ratify it by amending their respective national laws.

First ever ‘crime-free zone’ along India, Bangladesh international border
On March 9, 2018, Director Generals of India’ Border Security Force (BSF) and Border Guard Bangladesh (BGB) declared an 8.3 km stretch of the Indo-Bangladesh border as a ‘crime-free zone’.
‘Crime-free zone’ along India – Bangladesh Border:
i. The 8.3 km stretch covers the Gunarmath and Kalyani Border Out Posts (BOPs) in India and the Puthkhali and Daulatpur BOPs in Bangladesh.
ii. Both the forces, with the help of the civil administrations, NGOs and the local populace from both the sides will work together to ensure that no crime or anti-social activity occurs along this stretch.
iii. This stretch is one of the most vulnerable, along which, cattle smuggling and other criminal activities are carried out.
iv. Decision to develop such ‘crime-free zone’ stretches was taken during the Director General level talks in New Delhi in October 2017.
v.Situation at 8.3 km stretch, which has been declared as a ‘crime-free zone’ will be reviewed after 5-6 months. Based on the review, necessary improvisations will be carried out and efforts will be made to extend such zones to other trouble-prone areas along India-Bangladesh border.
Quick Facts about Bangladesh:
♦ Capital – Dhaka
♦ Currency – Taka
♦ Current Prime Minister – Sheikh Hasina
♦ Neighbouring Countries – India, Myanmar 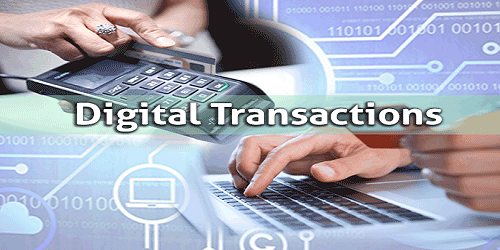 Highlights of ‘Transactions 2025’ Report:
i. The report has outlined that there could be 3 billion connected devices by 2025 and merchant adoption of payments would go up by 10 times from current level.
ii. Increase in digital payments would largely be driven by higher adoption of Unified Payments Interface (UPI).
iii. Higher adoption would come on back of consumer demand, policy push from the government, disruptive technology and services like taxi payments and ecommerce growth.
iv. With the increase in digital payments, cyber security risks and the cost of managing cyber attacks will also rise to $20 billion from around $4 billion currently.
Quick Facts about ACI Worldwide:
♦ Founded in – 1975
♦ Headquarters – Naples, US

IREDA, EIB ink 150mn-euro loan agreement for renewable energy
On March 10, 2018, Indian Renewable Energy Development Agency (IREDA) and European Investment Bank (EIB) inked a 150 million Euros loan agreement for a second line of credit (LoC).
Details about IREDA and EIB Agreement:
i. Funds procured through LoC will be utilised for financing renewable energy and energy efficiency projects in India.
ii. More than 1.1 million households in India will be benefited from clean energy produced through these projects.
iii. The LoC is for tenure of 15 years and includes a grace period of three years.
iv. IREDA is the financing arm of the New and Renewable Energy Ministry of Government of India, while EIB is the long-term lending institution of the European Union.
Quick Facts about IREDA:
♦ Established in – 1987
♦ Under administrative control of – Ministry of New and Renewable Energy (MNRE)
♦ Objective – promoting, developing and extending financial assistance for setting up projects relating to new and renewable sources of energy and energy efficiency/conservation 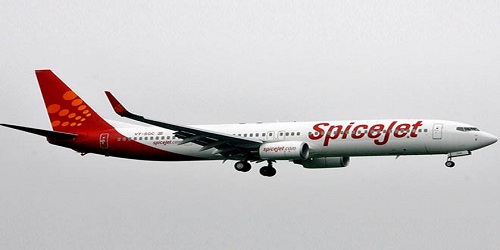 SpiceJet flight from Kolkata becomes the first passenger plane to land in Sikkim:
i. This is the first civil fixed-wing flight to land in Sikkim. The Spicejet Q400 Bombardier landed at the Pakyong Airport on a trial run.
ii. Spicejet Q400 Bombardier is a 78-seater flight. It took off from Kolkata Airport and landed at the Pakyong Airport.
iii. The Pakyong Airport has been constructed newly. It was ready for operation from the start of this year.
iv .Pakyong Airport is 32 km away from Gangtok, which is the capital of Sikkim. This advancement is expected to boost tourism activities in Sikkim.
About SpiceJet:
♦ Chairman & MD – Mr. Ajay Singh
♦ Headquarters – Gurgaon, Haryana About 2018 ITB-Berlin:
i. ITB Berlin (Internationale Tourismus-Borse Berlin) is the world’s largest tourism trade fair which takes place annually in March at the Messe Berlin, Germany.
ii. 2018 ITB Berlin was held from 7th – 11th March, 2018. Tourism Ministries of nearly 100 countries participated in this meet.
iii. For the ‘Best Exhibitor Award’, trade fair stands of more than 10000 exhibitors were divided into a total of 11 categories and were evaluated on several parameters.
iv. Minister of State (Independent charge) for Tourism Mr K. J. Alphons represented India at 2018 ITB Berlin.
v. India’s Ministry of Tourism presented a short film named “Yogi of the Racetrack” at 2018 ITB Berlin.

China scraps two-term limit, makes Xi Jinping president for life
On 11th March 2018, the National People’s Congress (NPC) of China cleared an amendment to its constitution that will strike out a clause restricting the term of President to two five-year terms. China scraps two-term limit, makes Xi Jinping president for life:
i. This move paves way for Xi Jinping to continue as president of China beyond his term limit of 2023.
ii. In the voting conducted at National People’s Congress, out of the 2980 deputies, only two of them gave negative vote and three refrained from voting.
iii. On 4th December 1982, the current version of the Chinese constitution was adopted by the National People’s Congress. Before the recent amendment the Presidential term was limited to two five-year terms.
iv. Xi Jinping became the Chinese President in March 2013. His second term as President started in October 2017.
About National People’s Congress (NPC):
♦ Purpose – national legislature of the People’s Republic of China
♦ Type – Unicameral

Russia test-fires ‘ideal’ hypersonic missile
On 11th March 2018, Russia announced that, it successfully launched a hypersonic missile.
Russia test-fires ‘ideal’ hypersonic missile:
i. The high-precision Kinzhal (Dagger) missile was launched from a MiG-31 supersonic interceptor jet from an airfield in the South Military District in southwest Russia.
ii. Russian President Vladimir Putin said that, the speed of the missile is 10 times the speed of sound. He said that, it can overcome air-defence systems.
iii. He added that the missile has been deployed in the Southern Military District from 1st December 2017.
iv. Russian Deputy Prime Minister Dmitry Rogozin said that, the MiG-31 supersonic jet that will carry the missile has also been modernized.
About Roscosmos State Corporation for Space Activities:
♦ Purpose – responsible for the space science program of the Russian Federation and general aerospace research
♦ General Director of Roskosmos – Igor Anatolyevich Komarov 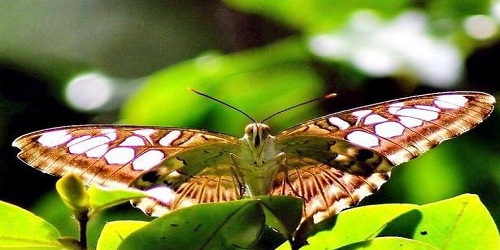 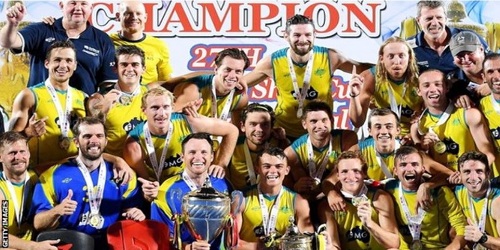 Journalist Ranjan Roy dies at 57
On 10th March 2018, Ranjan Roy, a senior journalist, died after suffering from cancer, in New Delhi.
Death of Ranjan Roy:
i. Ranjan Roy was 57 years old. He was the chief of Times News Network (TNN). He was also a member of TNN’s national editorial board.
ii. In 1982, he started his career with Press Trust of India (PTI) in New Delhi as a trainee.
About Press Trust of India (PTI):
♦ Headquarters – New Delhi
♦ Chairman – Mr Viveck Goenka