We are here for you to provide the important current affairs July 18 2018 which have unique updates of all daily events from all newspapers such as The Hindu, The Economic Times, PIB, Times of India, India Today, Indian Express, Business Standard, all Government official websites. Our complete current affairs helps you to get more marks in Banking, insurance, UPSC, SSC, CLAT, Railway and all other competitive Exams. 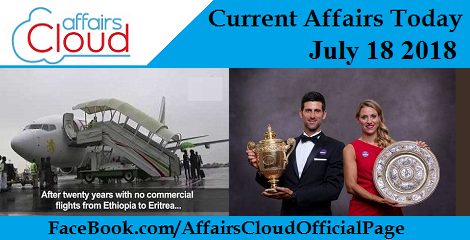 7th Defence Technology and Trade Initiative : Indo-US delegation meeting on Defence Cooperation held in New Delhi
On July 18, 2018, The ministry of Defence announced that Indo-US Bilateral Defence Cooperation, the 7th Defence Technology and Trade Initiative (DTTI) meeting was held between India and the US delegation in New Delhi. 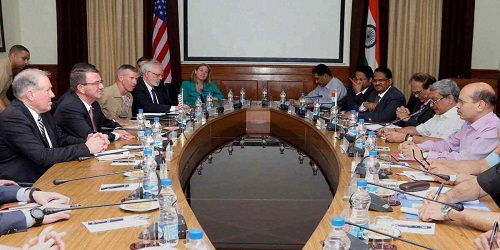 Objective:
Aim to bring focus to the bilateral defence trade relationship and for co-production and co-development of defence equipment.
Dignitaries Present:
The meeting was co-chaired by Secretary, Defence Production, Dr Ajay Kumar (From the Indian Side) and Ellen M Lord , Under Secretary of Defence for Acquisition and Sustainment, US Government (From the US side).
Key Points:
i. US has designated India as a ‘Major Defence Partner’.
ii. Discussions on the formulation of a Standard Operating Procedure and the Industrial Security Annex under DTTI was held.
iii. Establishment of Joint Working Groups  has been made under DTTI to progress mutually agreed projects for the armed forces.

About Defence Technology and Trade Initiative (DTTI) meeting :
i. DTTI is an important forum leading to the 2+2 dialogue between the two countries.
ii. The meetings are held twice a year, alternately in India and the USA.
USA:
♦ Capital: Washington D.C.
♦ Currency: United States Dollar.
Nickname of cities: First commercial flight in 20 years leaves Ethiopia for Eritrea:
i. Ethiopian Airlines said that, flight ET0312 to Asmara departed Bole International Airport, following an inauguration ceremony. The airlines operated two flights within an interval of 15 minutes.
iii. Eritrea was once a province of Ethiopia. In 1993, Eritrea separated after an independence struggle.
iv. Demarcation of the shared border caused a brutal conflict in 1998-2000, in which 80,000 people were killed.
v. In June 2018, Ethiopia’s Prime Minister Abiy Ahmed accepted a 2002 United Nations-backed border demarcation.
vi. This lead to peace between Ethiopia and Eritrea. Ethiopia’s Prime Minister Abiy Ahmed and Eritrea President Isaias Afwerki declared an official end to the war.

India ranks 109th in 4G Speed : Ookla
On July 18, 2018, according to a report by online speed testing platform Ookla, India was at 9.12 Mbps in the 4G speed category behind neighbors Pakistan (14.03 Mbps) and Sri Lanka (16.98).
i. India ranks 109th in overall 4G mobile internet speeds.
ii. Out of the list comprising 124 countries, Qatar ranked first in the list with 63.22 Mbps average download speed. Norway stood second in the list with 62.14 Mbps download speed. Objective :
This infusion was done to enable the banks to make interest payments on additional Tier 1 bonds issued by banks.
i. The 5 banks are :  Punjab National Bank (PNB), Andhra Bank , Corporation Bank, Indian Overseas Bank and Allahabad Bank.
ii. This infusion is a part of the remaining Rs.65000 crore of infusion under government’s announcement of Rs.2.11 lakh crore of credit infusion in banks in 2017.
iii. The infusion is as follows:

Other announcements:
i .In January 2018, the government had announced that Rs 88,000 crore would be provided as capital support to 20 state-run banks in FY18.
ii. Of this, Rs 80,000 crore was through recapitalisation bonds and Rs 8,139 crore as budgetary support, while the banks were to raise Rs 10,312 crore from the market.
iii. Of the 21public sector banks, 13 have taken the approval of their boards or shareholders to raise equity capital.
Background:
♦ All of this is a part of the Rs 2.11 lakh crore plan of infusion announced in October 2017.
♦ The government will provide Rs 1.35 lakh crore through recapitalisation bonds, while the banks will need to raise.`58,000 crore on their own.
♦ Out of the Rs 1.35 lakh crore, the government has already in fused about Rs 71,000 crore through recap bonds in the banks.
♦ PSBs are planning to raise more than Rs 50,000 crore this fiscal .

All-Women J&K Bank branch inaugurated by First Lady Usha Vohra
On July 16, 2018, The first all-women branch of Jammu & Kashmir Bank was inaugurated by the first lady Usha Vohra at an event at the Sher-i-Kashmir International Convention Centre (SKICC), in Srinagar. Training of youth on digital skills to be done by Facebook and NSDC jointly
On July 18, 2018, Facebook and National Skill Development Corporation (NSDC) took joint responsibility to train youth and entrepreneurs in the country on digital skills.
i. Through this partnership Ministry of Skill Development and Entrepreneurship (MSDE) will make use of Facebook’s training on digital marketing skills in its courses.
ii. Courses will be on : digital marketing, online safety and financial literacy in regional languages.
iii. Here the trainees will have access to local, domestic and international markets.
iv. They will also have access to Facebook’s Jobs tool to easily search for job openings.
Background:
i. Facebook has opened its Digital Training Hub in 2017,  and has so far trained more than two lakh youth and entrepreneurs under the #BoostYourBusiness programme across 16 Indian states.
ii. It is currently training 30,000 women entrepreneurs under #SheMeansBusiness programme.
iii. It aims to train five lakh youth and entrepreneurs by 2020.
About Ministry of Skill Development and Entrepreneurship (MSDE):
Union Minister: Dharmendra Pradhan.
Facebook:
♦ Headquarters: California, USA.
♦ CEO: Mark Zuckerberg.
♦ Founded: 2004. 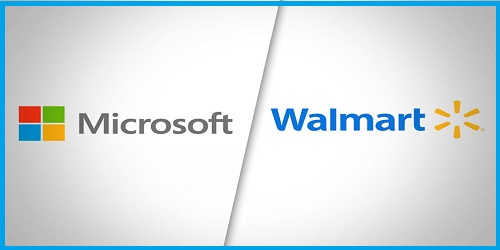 Walmart, Microsoft team up to take on Amazon:
i. This announcement was made by Walmart at the Microsoft’s Inspire partner conference in Las Vegas.
ii. Walmart said that it is partnering with Microsoft to use its cloud services. Walmart will utilise Azure and Microsoft 365 across the company.
iii. Also, new projects focused on machine learning, artificial intelligence, and data platforms will be taken up.
iv. Walmart is Amazon’s biggest retail competitor. Microsoft is Amazon’s biggest cloud services competitor. This partnership will help both the companies take on Amazon.
About Amazon:
♦ CEO – Jeff Bezos
♦ Headquarters – Seattle, Washington, U.S. 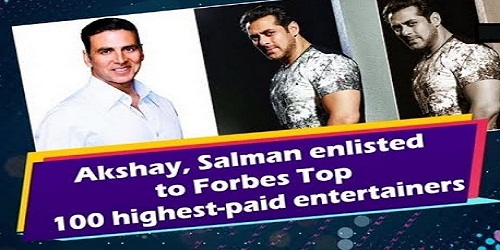 Twelve new moons discovered orbiting Jupiter
Scientists have discovered 12 new moons orbiting Jupiter, making the total number of natural satellites circling around Jupiter to 79.
Twelve new moons discovered orbiting Jupiter:
i. The discovery includes 11 “normal” outer moons, and one “oddball.” The researchers were led by Scott S Sheppard from Carnegie Institution for Science, US.
ii. They first spotted the moons in 2017. Out of the new moons 9 are part of a distant outer swarm of moons that orbit it in the retrograde, or opposite direction of Jupiter’s spin rotation.
iii. These distant retrograde moons are categorised into at least 3 distinct orbital groupings. They are believed to be remnants of three once-larger parent bodies that broke during collisions with asteroids, comets, or other moons.
iv. The newly discovered retrograde moons take nearly 2 years to orbit Jupiter. 2 of the new discoveries are part of a closer, inner group of moons that orbit in the prograde, or same direction as Jupiter’s rotation.
v. These inner prograde moons have similar orbital distances and angles of inclinations around Jupiter.
vi. They are believed to be fragments of a larger moon that was broken. These 2 newly discovered moons take a little less than 1 year to travel around Jupiter.
v. The new “oddball” moon is more distant and more inclined than the prograde group of moons. It takes about 1.5 years to orbit Jupiter. It has an orbit that crosses the outer retrograde moons.
vi. This might cause head-on collisions between the “oddball” prograde and the retrograde moons that move in opposite directions.
vii. The “oddball” prograde moon is believed to be the last-remaining remnant of a once-larger prograde-orbiting moon.
viii. The name Valetudo has been proposed for it. It is the name of the Roman god Jupiter’s great-granddaughter, the goddess of health and hygiene.
Some important museums in India:
♦ Maharaja Lakshmeshwar Singh Museum – Darbhanga, Bihar
♦ Chandra Shekhar Singh Museum – Jamui, Bihar
♦ Srikrishna Science Centre – Patna, Bihar

World’s first blood test to detect melanoma early developed
On 18th July 2018, Australian scientists said that, they have developed the world’s first blood test capable of detecting melanoma in its early stages.
World’s first blood test to detect melanoma early developed:
i. Researchers at Edith Cowan University (ECU) in Australia said that, the new blood test will help doctors detect melanoma before it spreads throughout the body.
ii. Melanoma is the most dangerous form of skin cancer. A trial was conducted with 105 people having melanoma and 104 healthy controls.
iii. The blood test detected early stage melanoma in 79 % of the cases. At present, melanoma is detected by a visual scan and biopsy.
iv. The biopsies involve taking a minimum of one square centimetre of skin from the patient.
v. The blood test works by detecting the autoantibodies the body generates as a response to melanoma.
Some important sea ports in India:
♦ Kandla Port – Gujarat
♦ Panambur Port – Karnataka
♦ Paradip Port – Odisha i. The Silver Medals won were by:

ii. The Bronze Medals won were by:

Australian football player Tim Cahill retires from Australia duty
On 17th July 2018, Australian football player Tim Cahill retired from international football.
Retirement of Tim Cahill:
i. Tim Cahill is 38 years old. He is Australia’s all-time leading goal-scorer. He has scored 50 international goals in 107 appearances.
ii. He did not mention if he would continue playing club football. He was born in Sydney.
iii. He started his international career by playing for Western Samoa under-20s. In 2004, he joined the Socceroos.
iv. In 2006, he became the first Australian to score a goal at the World Cup in Germany.
v. Also, in 2007, he became the first Australian to score at an Asian Cup. In 2015, he helped the Socceroos to win the Asian title for the first time.
vi. He had appeared in 4 World Cups. He had also played for China’s Shanghai Shenhua and Hangzhou Greentown.
Some important stadiums in India:
♦ HPCA Cricket Stadium – Dharamshala, Himachal Pradesh
♦ Indira Gandhi Stadium – Una, Himachal Pradesh