We are here for you to provide the important current affairs January 3 2018 which have unique updates of all daily events from all newspapers such as The Hindu, The Economic Times, PIB, Times of India, India Today, Indian Express, Business Standard, all Government official websites. Our complete current affairs helps you to get more marks in Banking, insurance, UPSC, SSC, CLAT, Railway and all other competitive Exams. 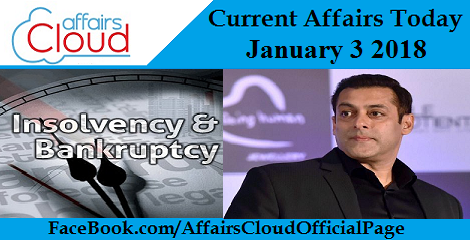 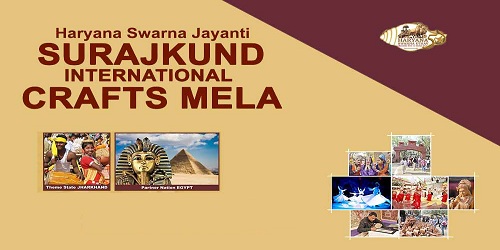 Surajkund crafts mela theme state – Uttar Pradesh:
i. All Indian states and around 24 countries are expected to participate in the Surajkund International Crafts Mela.
ii. Haryana tourism minister Ram Bilas Sharma said that, the fair is organized by Haryana Tourism and Surajkund Fair Authority in collaboration with Union ministries of tourism, textiles, culture and external affairs.
iii. It projects Indian handicrafts, handloom, cultural heritage and prosperity of India at global level. The theme state for Surajkund International Crafts Mela 2018 is Uttar Pradesh.
iv. Also, eminent folk artists and cultural groups of national and international repute will conduct programmes at the fair.
Some festivals celebrated in Haryana:
♦ Haryana Day – commemorates the day on which Haryana Tourism Corporation was formed
♦ Pinjore Heritage Festival – held at Pinjore Gardens  to promote the rich cultural and historic tradition of Pinjore region

Chah Bagichar Dhan Puraskar Mela 2017-18:
i. During the launch Sarbananda Sonowal distributed cheques to beneficiaries. Under this scheme people belonging to tea community who opened bank accounts during demonetisation will be credited Rs 2500 in their accounts.
iii .In the demonetisation period, 6,58,250 tea community members opened bank accounts. Assam government will spend Rs. 182 crore for giving financial incentives to all the account holders.
ii. In the next phase, another 2500 rupees will be credited to accounts which are continuously operated for 6 months from now.
Recent schemes of Assam government:
♦ Tractor Distribution Scheme to Double Farmers Income by 2022
♦ Assam Deen Dayal Divyangjan Sahajya Scheme – Rs 5000 for Person with Disabilities
♦ Sarothi Start Up fund Assam

Famous Dhanu Yatra festival concludes in Odisha
On 2nd January 2018, the Dhanu Yatra festival held in Bargarh district of Odisha came to an end.
Dhanu Yatra:
i. The Dhanu Yatra festival was held for 11 days. It began on 23 December 2017. This festival is based on Krishna Leela and Mathura Vijay.
ii. Bargarh was made to look like Mathura, which is the birthplace and homeland of Lord Krishna. River Jeera was made to resemble river Yamuna. Amapali region was transformed into Gopapura. Various artists from different parts of India performed in the festival.
iii. Sureswar Satpathy is the Chairman of Dhanu Jatra organising committee. He said that, this festival started in 1947-48 to celebrate India’s Independence and to mark the victory of good over evil.
Some classical dance forms of India:
♦ Bharatanatyam – Tamil Nadu
♦ Kathakali – Kerala
♦ Odissi – Odisha
♦ Sattriya – Assam Pakistan Replaces Dollar with Yuan for Bilateral Trade with China
On 2nd January 2018, the central bank of Pakistan approved the usage of Chinese currency, Yuan, for bilateral trade with China.
Dollar replaced with Yuan for Bilateral Trade with China:
i. This decision has been taken one day after US President Donald Trump announced stopping of all aid to Islamabad. This also indicates the growing bond between Pakistan and China.
ii. Now Pakistan and China might replace US dollar for transactions in China Pakistan Economic Corridor (CPEC) projects. Pakistan clarified that the Pakistani rupee will be continued for domestic usage.
About China Pakistan Economic Corridor (CPEC):
♦ Products – Roadways, railways, Special Economic Zones, energy production, mass transit
♦ Established – 2013

Govt finalizes Electoral Bonds scheme aimed at cleaning political funding
On January 2, 2018, Union Finance Minister Arun Jaitley outlined the basic contours of the electoral bonds scheme including their denominations, eligibility and validity.
Details about Electoral Bonds:
i. The electoral bonds scheme was announced during the 2017-18 Union Budget speech of Mr. Jaitley.
ii. This scheme will serve as an alternative to cash donations and is thereby an attempt to make political funding more transparent.
iii. Rather than giving cash donations, donors can buy electoral bonds from specified branches of State Bank of India (SBI) for 10 days each in months of January, April, July and October.
iv. The bonds will be available in Rs.1000, Rs. 10000, Rs. 10 lakh, Rs. 1 crore denominations. These bonds would be valid for 15 days.
v. Political parties that receive these bonds can encash it only through a designated bank account with Election Commission.
vi .At the time of purchasing the bonds, the donor will have to fulfil Know Your Customer (KYC) norms at the bank. However, the bonds will not carry his/her name. 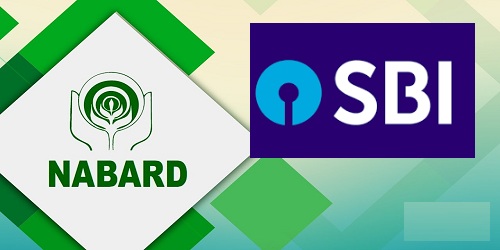 i. Informal groups comprising 4-10 members, undertaking similar economic activities, who are willing to jointly bear responsibility to repay loans taken by the group from a bank are referred to as joint liability groups.
ii. SBI has taken this initiative to extend financial assistance to excluded sections of the society, especially small or marginal tenant farmers who do not have a proper title of their farmland.
iii. Through this agreement, financial assistance will be extended to nearly 12500 tenant farmers in Purulia, Paschim Medinipur, Purba Medinipur, Burdwan and North 24 Parganas.
Quick Facts about State Bank of India (SBI):
♦ Renamed in – 1955
♦ Headquarters – Mumbai, Maharashtra
♦ Current Chairman – Rajnish Kumar

IICA, IPPB sign MoU to provide training on payment banking
On January 2, 2018, Indian Institute of Corporate Affairs (IICA) and India Post Payments Bank (IPPB) signed an agreement for the training of IPPB employees in the area of payment banking.
Details about IICA-IPPB MoU:
i. Under this agreement, IICA will not only impart training to IIPB officials/employees but will also provide research support in the area of payment banking.
ii. IPPB is Government of India’s attempt to further “financial inclusion” by providing basic banking services to population that has till date remained outside the ambit of formal banking.
iii. IPPB is well positioned to fulfil this responsibility by leveraging the massive network of post offices across India.
Quick Facts about IPPB:
♦ Incorporated in – August 2016
♦ Commenced Operations in – January 2017
♦ Parent Entity – Department of Posts, Govt. of India Details about APGVB’s Desktop ATMs:
i. The mini-ATM has been installed within the branch premises and will facilitate customers to withdraw small amounts. The regular bank account holders too can withdraw money from this desktop ATM and conduct other banking activities.
ii. The desktop ATM has low power requirements and is designed to work in harsh climatic conditions. It is specifically meant for rural customer who typically have small cash needs.
iii. APGVB has laid out plans to install 100 such desktop ATMs in different busy branches. 60 of them will be in Telangana State and 40 in AP branches.
Quick Facts about Andhra Pradesh Grameena Vikas Bank:
♦ Founded in – 2006
♦ Headquarters – Warangal
♦ Sponsor Bank – State Bank of India (SBI)
♦ Current Chairman – V. Narasi Reddy
♦ Tagline – ‘We are with you!’

NABARD sanctioned Rs 372.51 crore to Odisha
National Bank for Agriculture and Rural Development (NABARD) has sanctioned Rs 372.51 crore loan assistance to Odisha for irrigation and rural bridge projects, that are to be undertaken during Jan- March 2017 period.
i. This loan has been sanctioned under the Rural Infrastructure Development Fund (RIDF).
ii. Out of this amount, Rs 130.17 crore will be used for carrying out work on 17322 lift irrigation projects including bore wells, shallow tube wells, digging wells and micro river lifts.
iii. These projects will provide assured irrigation to about 36440 hectares of agricultural land and will directly benefit about 40000 farmers across Odisha.
iv. Rs. 242.34 will be spent on 14 Rural Bridge Projects under Biju Setu Yojana. These bridges would add 6222.89 metres of bridge length, benefiting about 4.56 lakh population in 322 villages of the state.
Quick Facts about NABARD:
♦ Established in – 1982
♦ Headquarters – Mumbai, Maharashtra
♦ Current Chairman – Dr. Harsh Kumar Bhanwala

RIL commissions world’s largest refinery off-gas cracker:
i. Reliance Industries Ltd stated that, this refinery will have a capacity of 1.5 million tonnes per annum along with downstream plants and utilities.
ii. It said that, the facility uses off-gases from  two refineries of RIL at Jamnagar as feedstock. This will enable sustainable cost reduction.
About Reliance Industries Limited (RIL):
♦ Headquarters – Mumbai, Maharashtra
♦ Chairman & MD – Mukesh Ambani

Samudra Manthan:
i. “Samudra Manthan-Caring Organisation of the Year” award was organised by Bhandarkar Shipping.  Bhandarkar Shipping is an important publication of the maritime industry.
ii. The objective of this award is to create healthy competition in the maritime sector. Jawaharlal Nehru Port Trust (JNPT) is India’s number one container port in terms of volume and efficiency.
iii. The Shipping corporation of India, MSC Crewing and DP world were among the finalists for the award.
About Jawaharlal Nehru Port:
♦ Location – east of Mumbai
♦ Operated by – Jawaharlal Nehru Port Trust 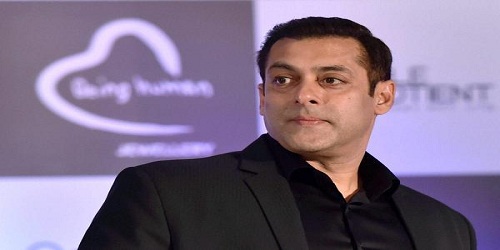 AB Mathur appointed Government interlocutor for talks with ULFA
On 2nd January 2018, the central government appointed AB Mathur as interlocutor on its behalf to hold talks with the United Liberation Front of Assam (ULFA).
AB Mathur – Government interlocutor for talks with ULFA:
i. AB Mathur is an IPS officer of the 1975 batch. He is the former special secretary of the Research and Analysis Wing (RAW).
ii. Earlier he worked with the Intelligence Bureau (IB). ULFA (United Liberation Front of Assam) functions in Assam. It fights for sovereign Assam. 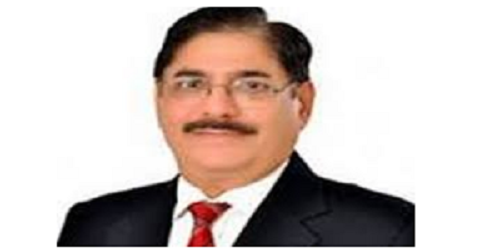