We are here for you to provide the important current affairs February 27 2018 which have unique updates of all daily events from all newspapers such as The Hindu, The Economic Times, PIB, Times of India, India Today, Indian Express, Business Standard, all Government official websites. Our complete current affairs helps you to get more marks in Banking, insurance, UPSC, SSC, CLAT, Railway and all other competitive Exams. 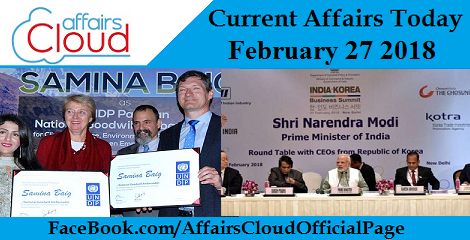 Uma Bharti launches 2nd project of Swajal Yojana in Rajasthan
On February 27, 2018, Union Minister of Drinking Water and Sanitation, Uma Bharti, launched the Swajal pilot project at Village Bhikampura, in Rajasthan.
Details about Swajal Project in Rajasthan:
i. Swajal is a community owned drinking water programme for sustained drinking water supply. 90% of the project cost will be provided by Central Government while remaining 10% of the project cost will be contributed by the local community.
ii. Budget of Rs. 54.17 lakh has been allocated for Swajal Project at Bhikampura.
iii. Bhikhampura village faces scarcity of drinking water and villagers have to walk at least 3 km to collect it. Under the Swajal Project, four reservoirs will be constructed in the village and common tap connection will be given to all the households.
iv. This project will not only ensure round the year availability of clean drinking water to every household in Bhikampura, but will also generate employment. 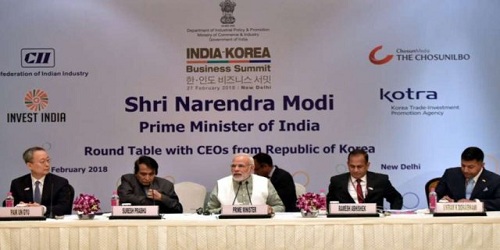 Highlights of India-Korea Business Summit 2018:
i. Union Finance Minister Arun Jaitley, Union Commerce Minister Suresh Prabhu and Minister of Electronics and IT, Ravi Shankar Prasad, also addressed the summit.
ii. Theme of India-Korea Business Summit 2018 was “India-Korea: Scaling up the Special Strategic Relationship through Trade and Investments”.
iii. The summit brought together top business leaders and the government officials from India and Korea to create the framework for an open and action-oriented dialogue.
iv. Discussions at the Summit focused on exploring opportunities in Infrastructure, Information Communication Technology, Power, Smart Cities and Manufacturing sectors.
v. Over 200 business delegates, including representatives of leading Korean business conglomerates and Government officials participated in this Summit. National Technology Centre for Ports, Waterways and Coasts (NTCPWC):
i. An MoU was signed between the Ministry of Shipping and IIT Chennai at the occasion.
ii. NTCPWC is set up under the Sagarmala programme of Ministry of Shipping. It will function as a technology arm of the Ministry of Shipping.
iii. NTCPWC will offer engineering and technological inputs and support for Ports, Inland Waterways Authority of India (IWAI) and other institutions.
iv. The cost for setting up NTCPWC is Rs 70.53 crore. This amount is shared by Ministry of Shipping, IWAI and the Major Ports.
v. Ministry of Shipping will fund for development of facilities like Field Research Facility (FRF), Sedimentation and Erosion Management Test Basin and Ship/Tow Simulator.
vi. NTCPWC will become self-sustainable in 3 years. It will handle industry consultancy projects for Indian and global ports.
vii. NTCPWC will offer indigenous software and technology, develop technical guidelines and standards and work towards modernization of Indian ports.
About Inland Waterways Authority of India (IWAI):
♦ Chairperson – Nutan Guha-Biswas
♦ Headquarters – Noida, Uttar Pradesh

Telangana CM announces five lakh rupees health-cum-life insurance scheme for farmers
On February 26, 2018, Telangana Chief Minister K Chandrasekhar Rao announced five lakh rupees health-cum-life insurance scheme for farmers in the state.
Details about health-cum-life insurance scheme for farmers:
i. Announcement in this regard was made by K Chandrasekhar Rao while addressing the regional conference of Farmers’ Coordination Committees in Karimnagar, Telanagana.
ii. Over 70 lakh farmers across Telangana will be covered under this scheme. In case of death of farmer, amount will be paid to families of farmers. Health insurance will be provided in case of hospitalisation.
iii. Entire premium for the insurance will be borne by the Telangana State Government. Rs. 500 crore has been allocated for implementation of this scheme.
Quick Facts about Telangana:
♦ Capital – Hyderabad
♦ Current Governor – E.S.L. Narasimhan
♦ Current Chief Minister – K. Chandrashekar Rao
♦ Important National Park – Mrugavani National Park 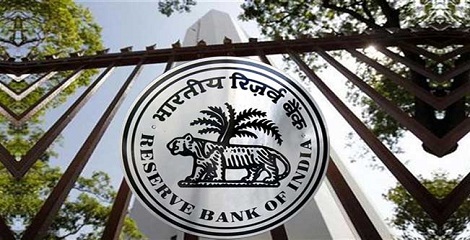 Currency Derivatives Exposure Limit:
i. As of now, four currency pairs, viz. USD/INR, EUR/INR (Euro), GBP/INR (Great British Pound) and JPY/INR (Japanese Yen) are traded on Indian exchanges.
ii. This instrument is primarily used by Indian exporters and importers and foreign portfolio investors (FPIs) to hedge their risk against currency price fluctuations.
iii. Earlier exposure limit set by RBI was USD 15 million for USD-INR contracts and USD 5 million for other currency pairs.
iv. Increasing exposure limit will help the participants to better manage their risk and will also improve the liquidity in the instrument.
v. However, onus of keeping the exposure within the new prescribed limit rests with participants. Besides, it is a combined limit across all exchanges.
vi. Participants who breach this limit may face action as per the provisions of Foreign Exchange Management Act, 1999 and the regulations and directions related to the subject. Details about IndusInd Bank – Ripple tie-up:
i. Through this tie-up, IndusInd Bank will leverage Ripple platform based on blockchain technology for global payments as it lowers both costs and transfer time for customers.
ii. IndusInd Bank will use the platform for settling payment of its retail remitters, recipients as well as institutional partners across the world.
iii. In context of this news, it is important to note that for 2017, inward remittances in India stood at $65 billion.
Quick Facts about IndusInd Bank:
♦ Founded in – 1994
♦ Headquarters – Mumbai, Maharashtra
♦ Current Chairman – R. Seshasayee

CSIR inks MoU with IORA-RCSTT
Council of Scientific and Industrial Research (CSIR) has signed a memorandum of understanding (MoU) with the Indian Ocean Rim Association’s Regional Center for Science and Technology Transfer (IORA-RCSTT) for designating Central Institute of Medicinal and Aromatic Plants (CIMAP) in Lucknow as the coordinating centre on medicinal plants.
i. This MoU was signed by Anil Kumar Tripathi, the Director of CIMAP and A Sedrpousan Director of IORA-RCSTT, in Iran.
ii. As per the terms of the MoU, a database on the important medicinal plants, their value added products, related experts and industries of the IORA member states will be established at CIMAP.
iii. IORA is an association of 21 countries and 7 dialogue partners. ‘Medicinal plants’ is one of the 6 areas of cooperation identified by IORA.
Quick Facts about CIMAP:
♦ Established in – 1959
♦ Located in – Lucknow, Uttar Pradesh
♦ Current Director – Anil Kumar Tripathi 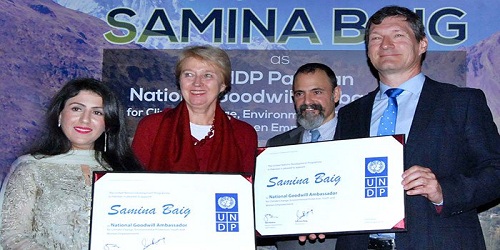 ISRO plans to build ‘igloos’ on Moon for astronauts
Indian Space Research Organisation (ISRO) has started work on building igloos (referred to as lunar habitats) on the Moon.

New facilities for UAN-Aadhaar linking introduced by EPFO
Employees’ Provident Fund Organisation (EPFO) has introduced new facilities to link Universal Account Number (UAN) with Aadhaar.
New facilities for UAN-Aadhaar linking:
i. Now UAN can be linked with Aadhaar through EPFO Link in UMANG Mobile App. This has been introduced in addition to the existing facility available at EPFO’s website: www.epfindia.gov.in >> Online Services >> e-KYC Portal>> LINK UAN AADHAAR.
ii. A new feature to link UAN with Aadhaar online, using biometric credentials has been added to the facility in the e-KYC Portal.
iii. EPFO has also introduced e-Nomination facility for filing nomination form by members. This facility is offered at Member Interface of EPFO Unified Portal (https://unifiedportal-mem.epfindia.gov.in/memberinterface/).
iv. Members who have activated and Aadhaar seeded UAN, can utilise this facility.              This facility is independent from employer.  This will soon be made available on UMANG app also.
About Employees’ Provident Fund Organisation (EPFO):
♦ Headquarters – New Delhi
♦ Central Provident Fund Commissioner – Dr. V P Joy 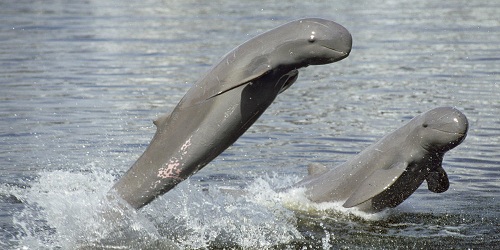 Chilika Lake becomes largest habitat of Irrawaddy dolphins globally:
i. A Chilika Development Authority (CDA) official said that, 155 Irrawaddy dolphins have been identified in the Chilika Lake.
ii. This information has been provided based on the preliminary report of the first ‘Annual Monitoring’ of the Chilika Lake conducted recently.
iii. The ‘Annual Monitoring’ was performed to count the number of marine mammals and to analyse the hydrological impacts of removal of pen culture.
About Chilika Development Authority (CDA):
♦ Chief Executive – Susanta Nanda
♦ Location – Odisha IDBI Federal Life Insurance New Delhi Marathon:
i. Gopi Thonakal finished in 2 hours, 15 minutes and 16 seconds and won the title in men’s category. But he missed qualification for the Gold Coast Commonwealth Games, for which the Athletics Federation of India has set a 2:12:50 qualification standard.
ii. Nitendra Singh Rawat finished second in 2:24:55 and Bahadur Singh Dhoni finished third in 2:24:56 among men.
iii. In the women’s category, Monika Athare won the title with a timing of 2:43:46. She was followed by Jyoti Gawte in second position with 2:50:12 and Monica Raut in the third position with 2:55:02.
iv. The marathon was flagged off at Jawaharlal Nehru Stadium by Sachin Tendulkar. Nearly 65 elite Indian athletes participated in the full marathon of 42.195km.
About IDBI Bank:
♦ MD & CEO – Mr. Mahesh Kumar Jain
♦ Headquarters – Mumbai

Veteran CPI leader Prabodh Panda passes away
On 27th February 2018, Prabodh Panda, former MP and State Secretary of West Bengal for Communist Party of India (CPI), died due to heart attack, at his residence in Kolkata. 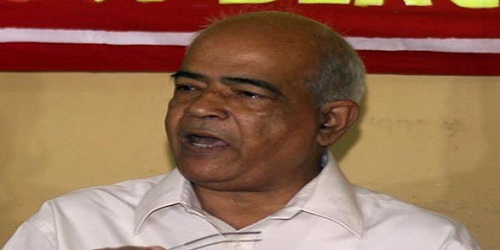 Death of Prabodh Panda:
i. Prabodh Panda was 72 years old. He served as national President of the All India Kisan Sabha.
ii. He was a three-time MP from Midnapore. He was first elected to the Lok Sabha in 2001. Then he was re-elected in 2004 and 2009.
About Communist Party of India (CPI):
♦ General Secretary – S. Sudhakar Reddy
♦ Headquarters – New Delhi