We are here for you to provide the important current affairs August 31 2018 which have unique updates of all daily events from all newspapers such as The Hindu, The Economic Times, PIB, Times of India, India Today, Indian Express, Business Standard, all Government official websites. Our complete current affairs helps you to get more marks in Banking, insurance, UPSC, SSC, CLAT, Railway and all other competitive Exams. 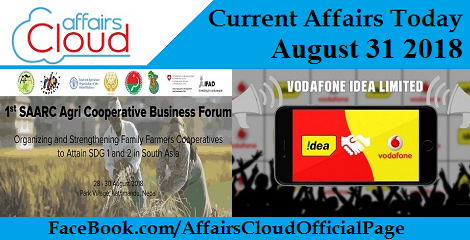 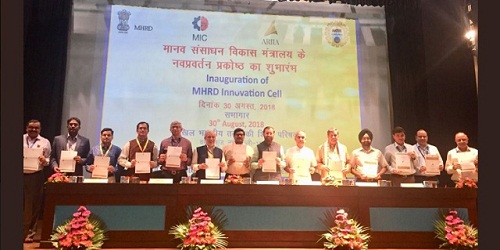 This has been established at the premises of All India Council of Technical Education (AICTE) in New Delhi.
Objective:
To promote a culture of innovation and research in higher education.
Key Points:
About Atal Ranking of Institutions on Innovation Achievements (ARIIA):
i.It will have 5 parameters namely:

ii.It will carry 100 marks based on which educational institutions would be ranked for innovation output.
iii. Announcement of ARIIA ranks: April 2019.
iv.It would encourage every college to have an innovation cell.
v.This is a part of setting up of Innovation Cell in the has been established at AICTE premises of the Ministry.
The Major Programs of the MHRD Innovation cell would be:

Other news related to innovation:
i.Earlier, India ranked 60 out of 127 countries in 2017 Global Innovation Index Ranking.
ii.Six new Research Parks have been sanctioned in various premier institutions.
iii.More than 120 Technology Business Incubators made across the country.
iv.The decade of 2010-20 has been announced as the ‘Decade of Innovation’ by the PM. 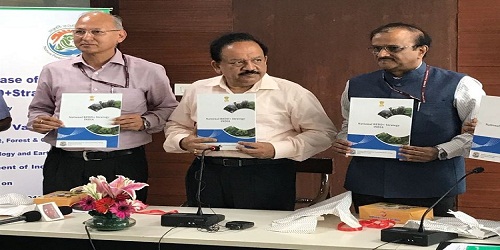 i. This has been constituted in line with India’s National Action Plan on Climate Change, Green India Mission and India’s Nationally Determined Contribution (NDC) to UNFCCC.
Objective:
To help build sustainable livelihood of local communities and conserve biodiversity.
Key Points:
i. REDD+ means “Reducing Emissions from Deforestation and forest Degradation”.
ii. Under the strategy following are to be established:

iii. REDD+ actions at the State level will be coordinated by the committee headed by the Principal Chief Conservator of Forests (PCCF) & Head of Forest Force (HOFF) of the States.
iv. This would enhance efforts for forest conservation and enhance productivity of forest eco-systems.
Background:
India has communicated in its Nationally Determined Contribution under Paris Agreement, that it will capture 2.5 to 3 billion tonnes of Carbon dioxide through additional forest and tree cover by 2030.
Static part:
♦ Director General, Forest and Special Secretary, Ministry of Environment, Forest and Climate Change: Dr Siddhanta Das.
♦ Additional Secretary, MoEF&CC: Shri A.K Mehta.

Inland Waterways Authority of India (IWAI) Makes India’s First Standardised Modern Ship Design for Ganga a Reality
On 31st August 2018, Inland Waterways Authority of India (IWAI) made public 13 standardised advanced ship designs suitable for large barge haulage on river Ganga (National Waterway-1).
Key Points:
i. The Government is implementing Jal Marg Vikas Project (JMVP) for capacity enhancement of navigation on NW-1 (Varanasi-Haldia stretch) at a cost of Rs 5369.18 crore. Technical assistance and investment support is provided by the World Bank.
ii. The new designs will help shipyards build vessels of standardised dimensions and capacity, and will lead to reduced fuel costs and lesser logistics costs.
iii. It will bring in savings of Rs 30-50 lakhs in building of a vessel. It will also eliminate the dependence on foreign ship designs for Inland Water Transport (IWT) and contribute to ‘Make in India’.
iv. New designs have been announced for categories like:

‘One District, One product’ scheme launched in Odisha : MSME Minister
On August 31, 2018, Union MSME Minister Giriraj Singh announced the launch of ‘One District One Product’ scheme in Odisha at a function of the SC-ST State Conclave cum Exhibition under National SC-ST Hub.
Objective:
To provide market link to farmers and make small industries successful in the state.
Key Points:
i. Under this scheme, the Union MSME secretary Arun Panda will be conducting a survey of the potential of the MSME sector.
ii. This survey will be conducted in the following sectors:
aromatic, agro, marine food processing, organic food marketing, turmeric and ginger processing and other section.
iii. Additionally, farmers of Kandhamal district will be taken to Maharashtra for agro cluster training and 50,000 agro entrepreneurs will be imparted training in Odisha.
iv. To make 18 lakh new youth entrepreneurs, centre will deploy mobile vans in rural areas to impart basic skill training by the Ministry of MSME.
Other New of the function:
i. Inauguration of first-ever National Skill Training Institute(NSTI)  in NSICs Dharmapada Bhawan was done in Barang, Bhubaneswar, Odisha.
ii. MoU was signed between Directorate General of Training (DGT), Ministry of Skill Development & Entrepreneurship, Government of India and Systems, Applications and Products (SAP) to provide designed module to SC-ST entrepreneurs through advanced software and special training on Data Sciences.
iii. Dharmendra Pradhan, Minister of Petroleum and Natural Gas and Minister of Skill Development and Entrepreneurship inaugurated the Bhubaneswar office of National Skill Development Corporation (NSDC).
About National SC-ST hub:
♦ The National SC/ST Hub has been set up to provide professional support to Scheduled Caste and Scheduled Tribe Entrepreneurs under Stand-Up India initiative.
♦ The Hub would be implemented by the Ministry of MSME through National Small Industries Corporation (NSIC), a public-sector undertaking under the administrative control of this Ministry of MSME.
♦ Initial allocation of Rs. 490 Crore for the period 2016-2020.
♦ Launch Year: 8th October , 2016. 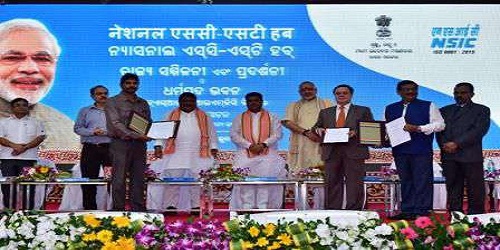 Key Points:
i. The MoUs are as follows: 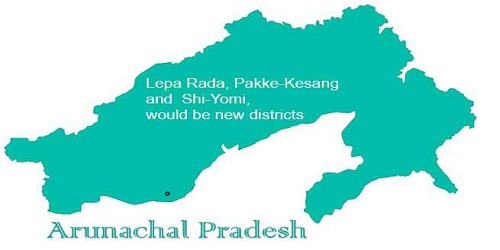 i. The name of the bill is the Arunachal Pradesh Re-Organisation of Districts (Amendment) Bill 2018.
ii. Now Arunachal Pradesh would have 25 districts in total after the addition of these 3 districts from earlier 22.
About the 3 new districts:
i. The Pakke-Kessang district will be carved out of East Kameng district with five administrative units with district headquarters at Lemmi.
ii. The Lepa Rada district would be created by bifurcating the Lower Siang district with headquarters at Basar with 4 administrative units.
iii. The Shi-Yomi district would be created by bifurcating the West Siang district with its headquarters at Tato with 4 administrative units.
Other Bills Passed are:
i.The deputy chief minister also introduced the Indian Stamp Act, 1899 (Act no 2 of 1899) to enable entrepreneurs to have a better credit position at their disposal by enabling them to secure loans through mortgage without compromising on their financial stability by reducing stamp duty for mortgage from three per cent to one per cent.
ii.The third bill introduced in the Assembly by Mein was the Arunachal Pradesh Staff Selection Board Bill 2018.It would empower the state government to constitute the Arunachal Pradesh Staff Selection Board to conduct exams and select candidates for appointment to the subordinate services/Group C posts.
Arunachal Pradesh:
♦ Chief Minister: Pema Khandu. i. The theme of three-day Forum is the ‘Organizing and Strengthening Family Farmers’ Cooperatives to attain the Sustainable-Development-Goals-1 and 2 in South Asia’
ii. It was organized by Food and Agriculture Organization (FAO) of United Nations and Asian Farmers’ Association with the support from International Fund for Agricultural Development.
iii. Dignitaries present were: representatives both from the government and non-governmental entities from the Member States of SAARC and regional and international organizations.
♦ Secretary-General of SAARC: Amjad Hussain B. Sial .
♦ SAARC  Countries :  Afghanistan, Bangladesh, Bhutan, India, Nepal, Maldives, Pakistan and Sri Lanka.
♦ SAARC Headquarters: Kathmandu, Nepal

Indian economy to grow at 7.4% in FY19: NCAER
On August 31, 2018, according to National Council of Applied Economic Research (NCAER) report for 2018-19, India’s growth forecast for the current fiscal is at 7.4 per cent .
i. The reasons cited for this are:

ii. According to the report: 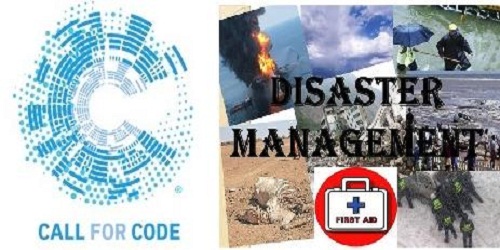 Call for Code:
i. Call for Code was announced in May 2018. IBM is the founding member along with American Red Cross and United Nations Human Rights Organisation.
ii. IBM has also joined hands with David Clark Cause, a global leader in creating cause brands and initiatives, for Call for Code.
iii. IBM will offer access to cloud, data, AI (Artificial Intelligence), blockchain technologies, training and code to developers.
iv. So far, more than 35 organizations and nearly 20 IBM clients have participated. The winning team of Call for Code will be awarded a cash prize of USD 200,000, along with other opportunities.
About IBM:
♦ Chairman, IBM India Pvt. Ltd. – Vanitha Narayanan
♦ Type – manufactures and markets computer hardware, middleware and software, and provides hosting and consulting services

ii. In the first phase, 23 out of 54 workshops have been identified for this project.
iii. Eventually, all 54 workshops and Production Units should be covered by 30th June 2019.
iv. This would create infrastructure and supply of CNG/LNG/PNG for both industrial and domestic purposes.
v. Additionally, in domestic segment, in Railway colony, Bhubaneswar, about 1100 houses have been provided with D-PNG supply.
vi. This would allow saving of about Rs. 20 crore per annum to Indian Railways.
Other news:
GAIL and IROAF would prepare a report on implementation of Natural Gas in Railway workshops by 30th September 2018.
Indian Railways:
♦ Railway Minister: Shri Piyush Goyal.
♦ Minister of State for Railways: Manoj Sinha, Rajen Gohain.
♦ Chairman Railway Board : Shri Ashwani Lohani.
GAIL:
♦ Chairman and Managing Director B C Tripathi.
♦ Headquarters: New Delhi.

Luka Modric named UEFA Player of the Year 2018: UEFA Awards
On August 31, 2018, in the UEFA Awards, Croatia captain Luka Modric was voted the best player in Europe. He also won the Midfielder of the Season. 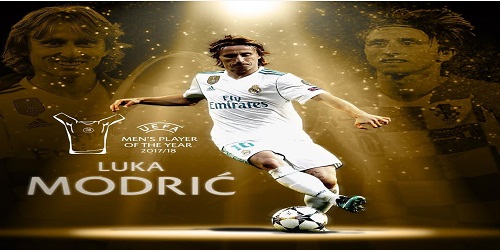 i. Real Madrid was named the best player in last season’s Champions League.
ii. The best women’s player award was won by Pernille Harder of Denmark and Wolfsburg.
iii. Best goalkeeper of the season was: Keylor Navas
iv. Best defender of the season was: Sergio Ramos.
v. Ronaldo won the Forward of the Season.
vi. 2018 UEFA President’s Award was given to David Beckham, Johan Cruyff, Franz Beckenbauer, Eusebio and Sir Bobby Charlton.
vii. Voting was done by  80 Champions League coaches and invited 55 journalists across Europe.

iii. They were awarded for their contribution to the society and their fight for equity, social justice and human welfare. 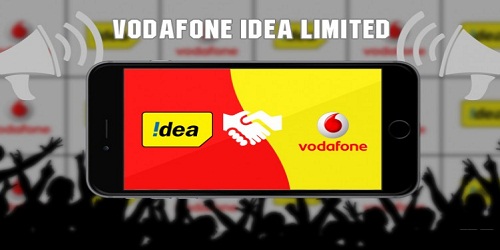 i. This deal is valued at roughly a $23 billion (roughly Rs. 1.6 lakh crores).
About the entity:
i. The name of the merged entity is: Vodafone Idea LTd.
ii. It is the country’s largest telecom operator by subscribers and revenue.
iii. The combined entity will have a revenue share of about 40 percent in the market and a total customer base of around 408 million.
iv. The board will have 12 directors including 6 independent directors, with Kumar Mangalam Birla as chairman and Balesh Sharma as chief executive officer.
v. Himanshu Kapania, managing director of Idea Cellular would be a non-executive director on the merged entity’s board.
Vodaphone:
Headquarters: London, UK.
IDEA Cellular:
Headquarters: Mumbai.

Jupiter’s Great Red Spot reveals signs of water: NASA
National Aeronautics and Space Administration (NASA) scientists have detected signs of water above Jupiter’s deepest clouds.
Key Points:
i. Scientists at the NASA’s Goddard Space flight center in Maryland, US, were looking from ground-based telescopes at the depth of Jupiter’s Great Red Spot, a storm that has been persistent for more than 350 years.
ii.  They detected the chemical signatures of water above Jupiter’s deepest clouds. The pressure of water combined with measurements of carbon monoxide, show that Jupiter has 2 to 9 times more oxygen than the Sun.
iii. This supports the theoretical and computer-simulation models that have predicted abundant water on Jupiter.
iv. This will supplement the information collected by NASA’s Juno spacecraft as it circles Jupiter from north to south once every 53 days.
About National Aeronautics and Space Administration (NASA):
♦ Administrator – Jim Bridenstine
♦ Headquarters – Washington, D.C., U.S.

New technology to predict fatal heart attacks developed
Researchers at the University of Oxford in the United Kingdom have developed a new technology that can detect patients with the risk of deadly heart attacks, well in advance.
Key Points:
i. The new technology analyses computed tomography (CT) images of the fat around the arteries to detect the inflamed plaques that can cause heart attacks.
ii.  It uses a new biomarker named the Fat Attenuation Index (FAI). The major challenge for doctors was to find out which plaques would cause blockages.
iii.Now, it has been found out that, the most dangerous plaques release chemical messengers that modify the surrounding fat.
iv. This technology can predict fatal heart attacks many years before it may occur. It also has higher accuracy compared to other methods.
v. People with abnormal FAI have around 9 times higher risk of having a fatal heart attack in the next 5 years.