We are here for you to provide the important current affairs of August 12 2017 which have unique updates of all daily events from all newspapers such as The Hindu, The Economic Times, PIB, Times of India, India Today, Indian Express, Business Standard, all Government official websites. Our complete current affairs helps you to get more marks in Banking, insurance, UPSC, SSC, CLAT, Railway and all other competitive Exams. 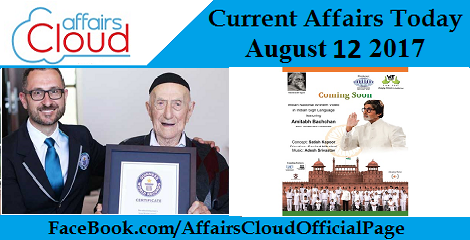 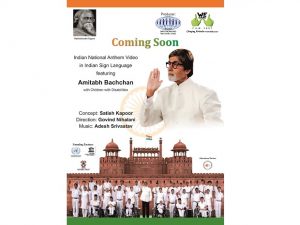 ii.Prime Minister Narendra Modi addressed the physically challenged “divyang” and not “viklang” to ensure there was no distinction.
iii.The Minister also mentioned that we should create an environment where such persons are able to “earn a livelihood and live an independent life like any other citizen”.
iv.The government’s decision is to increase reservation in government vacancies from 3% to 4% for persons with benchmark disability.
v.Thevideo was also launched in Goa, Bhopal, Chandigarh and Kolhapur.

Telangana launches Smart Streets Lab
To improve road safety in Hyderabad with the use of technology, the Government of Telangana, along with World Resources Institute (WRI) India Ross Center, has announced the launch of Smart Streets Lab program.
About Smart Streets Lab Program:
i.The Lab will pilot innovative road-safety and women safety solutions and leverage new developments in technology and IT to transform the streets of Hyderabad.
ii.As a part of the initiative, an online challenge seeking applications (till September 1, 2017) for projects designed to make Hyderabad’s streets ‘smart’ was announced.
iii.It seeks applications (from any organization, start-up etc) for innovations that are infrastructure independent and easy to integrate into the existing system.
iv.10 projects will be selected, and will undergo a training programme with the Indian School of Business (ISB).

Pakistan’s ‘Mother Teresa’ Dr Ruth pfau dies
Dr Ruth Pfau, a German doctor popularly known as Pakistan’s ‘Mother Teresa’ for dedicating her life to eradicate leprosy in the country passed away on August 10, 2017 in Karachi.
Dr Ruth Pfau’s efforts in eradicating Leprosy from Pakistan:
i.She was born in 1929 in Germany and lived through the horrors of the World War II.
ii.Dr. Pfau first visited Pakistan in 1960 and was so touched by the plight of leprosy victims that she decided to stay forever in the country to treat them. 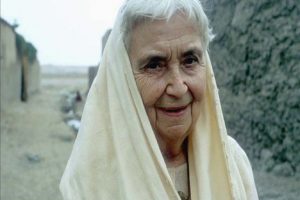 iii.She founded the Marie Adelaide Leprosy Centre in Karachi in 1962 and later set up its branches in all provinces of Pakistan, including Gilgit-Baltistan, and treated over 50,000 families.
iv.Due to her tireless efforts, the World Health Organisation in 1996 declared Pakistan one of the first countries in Asia to be free of leprosy.
v.She was awarded the Hilal-e-Imtiaz — Pakistan’s second highest civilian award — in 1979, the Hilal-e-Pakistan in 1989.

Key Points:
i.Previously, Chatterjee had been an energy policy advisor to US Senate Majority Leader Mitch McConnell.
ii. The Indian American Neil was last week confirmed as a member of the FERC.

i.Bharat QR (Quick Response): It is a mobile application, which enables a merchant to accept payments as settlement for sale of goods or services. The service product rides on VISA/MasterCard/RuPay cards and holders need not divulge card information to merchants.
ii.Bharat Bill Payment System (BBPS): It is an initiative of the Reserve Bank of India (RBI) and is managed by the National Payments Corp of India (NPCI). It offers bill payment services to the bank’s net banking customers with network of agents.
Quick Facts about Canara Bank:
Founded in: 1906
Headquarters: Bengaluru

Key Points:
i.Salesforce.com has replaced Tesla Motors on the top position. BhartiAirtel has entered the ranking at 78th position.
ii.HUL and Asian Paints have moved up in their ranks to 7thand 8threspectively (from 31st and 18th last year).
iii.HUL recorded an innovation premium of 68.59%;Asian Paints (68.28%) and BhartiAirtel (41.4%).
iv.Among others in the top 10 are — Amazon.com (3rd position), Shanghai RAAS Blood Products (4th), Netflix (5th), Incyte (6th), Naver (9th) and Regeneron Pharmaceuticals (10th).
v.The annual ‘World’s Most Innovative Companies’ are the ones that investors expect to be innovative now and in the future.
vi.To be included in the list, firms need seven years of public financial data and USD 10 billion in market cap.
vii.According to Forbes, companies are ranked by their innovation premium. The difference between their market capitalisation and the net present value of cash flows from existing businesses.
viii.Tata Consultancy Services (TCS), Sun Pharma and Larsen & Toubro were also on the 2016 list.
ix.This year these companies failed to make the cut this year, bringing down the total number of Indian firms from five to three.

GerishKhemani and Akshat Nigam awarded “Hindu playwright Award 2017”
The Hindu Playwright Award 2017 is awarded to GerishKhemani and Akshat Nigam for their play ‘In Search of DariyaSagar’.
Key Points:
i.The playwriting awards was organized by the newspaper The Hindu in Chennai.
ii.The 2 lakh award was presented to the two playwrights at the 13th edition of The Hindu Theatre festival.
iii.The jury comprised: 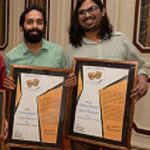 ISRO lines up 21 rockets, to launch 70 satellites in 5 years
Indian Space Research Organisation (ISRO) has lined up over 21 rocket launches and will be putting over 70 satellites in space over the next five years.
More Details about ISRO’s upcoming Rocket/Satellite Launches:

US scientists develop micropropulsion system based on liquid water
Engineers at Purdue University in the US have designed and tested a micropropulsion system. It is used liquid water as the propellant for orbital maneuvering of tiny satellites called CubeSats.
Key Points:
i.CubeSats are miniature satellites that weigh about 2 kilograms.
ii.In future they are capable to carry out tasks like imaging and remote-sensing.
iii.Currentlythey are performed by heavier satellites which are expensive to build and launch.
iv.CubeSats cannot totally replace their larger counterparts as they are incapable of changing orbit or performing complex manoeuvres.
v.CubeSats are usually made up of several units, each unit measuring 10 centimetres on a side.
vi.In the Purdue research, a single unit CubeSat prototype — integrated with four FEMTA thrusters. 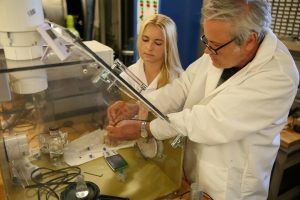 vii.It is called a “Film-Evaporation MEMS Tunable Array”, or FEMTA thruster, it uses capillaries thinner than human hair through which the propellant water can flow.
viii.Small heaters located near the ends of the capillaries turn the water into vapor, which, on escape from these tiny tubes, provides the thrust.
ix.Theminuscule capillaries act like valves that can be turned on and off by activating the heaters.
x.The technology is said to be similar to the inkjet printer, which uses heaters that fire dots of ink at the paper.

Prasoon Joshi appointed as Chairperson of CBFC
Bollywood lyricist-screenwriter and ad guru Prasoon Joshihas replaced PahlajNihalani as CBFC chairperson on 11th of August 2017.
Key Points:
i.He will be served for a period of 3 yearsor until further orders, whichever is earlier.
ii.Prasoon Joshi, who was conferred with the Padma Shri in 2015, has written lyrics for songs in Bollywood films such as Lajja, Fanaa, Rang De Basanti, TaareZameen Par and many more.
iii.Prasoonalso wrote the dialogues of the 2006 film Rang De Basanti and made his debut as a screenwriter with 2014 film BhaagMilkhaBhaag.
iv.Prasoon Joshi is also the CEO of McCann World group India and Chairman (Asia Pacific).
v.He is the winner of two National Awards and three Film fare Awards.
About CBFC :-
CBFC: Central Board of Film censor
Formation: 1952
Headquarters:Mumbai, Maharashtra, India.
CEO: AnuragSrivastava. 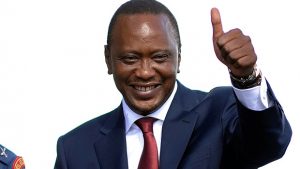 ii.According to election commission figures nearly 80% of the 19 million registered voters cast their ballots.
iii.The opposition rejected the results even before they were declared, calling the process a charade.
iv.A72-year-old former political prisoner Odinga, who has campaigned for the presidency four times, is refusing to accept the results, claiming the vote was hacked.

Jet Airways appoints Vinay Dube as CEO
Vinay Dube has joined as Chief Executive Officer (CEO) of Jet Airways. Jet Airways has been without a full-time CEO since Cramer Ball quit in February 2016.
i.Since the exit of Ball last year, there have been two acting CEOs — Gaurang Shetty and Amit Agarwal.
ii.Vinay Dube is an Indian American. His appointment was approved by the Jet Airways’ board of directors on May 30, 2017.
iii.Dube has served in various roles at Delta Airlines, Sabre Inc and American Airlines in the USA, Europe and Asia. 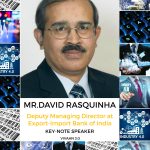 ii.The Appointments Committee of the Cabinet has approved his appointment to the post for three years.
Quick Facts about Exim Bank:
Founded in: 1982
Headquarters: Mumbai

Veteran sports journalist Ted Corbett passed away
Ted Corbett has passed awayon 9th of August in Huntingdon, the UK. He was 82.
Key Points:
i.He was born in Birmingham in 1935. Corbett retired from the travelling side of journalism in 2008.
ii.He also worked as the most envied job in newspapers as cricket correspondent of a national paper.
iii.The veteran journalist continued to write his weekly columns for The Hindu and the magazine Sportstar well beyond his 80th birthday.

South African Bodybuilder SifisoThabete passed away
South African body builder Sifiso Lungelo Thabete has passed away on 12th of August 2017.
Key Points:
i.Bodybuilderbreaks his neck and died in a freak accidentwhile doing back-flip to show off to crowds during his warm-up.
ii.Sifiso Lungelo Thabete broke his neck after landing on his head in front of horrified crowd.
iii.His body failed to gain enough momentum to rotate.Thabethe landed on the back of his head.
iv.His body then rolled over and he was laid motionless on the mat.
v.According to Body Building South Africa, ‘Sifiso had a signature backflip’ he liked to perform on stage.
vi.He was a former IFBB junior world champion in the up to 75kg category. 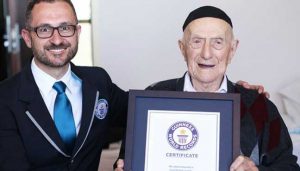 Key Points:
i.He was certified in 2016 by Guinness World Records as the world’s oldest man. 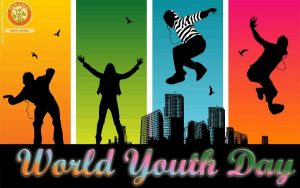 Key Points:
i.The 2017 International Youth day Theme is ‘Youth Building Peace’.
ii.The International Youth Day was proclaimed by the United Nations General Assembly (UNGA) on 17 December 1999 through its resolution 54/120.
iii.In1985, the UN celebrated the first International Year of Youth.
iv.The Day came into existence through the recommendation of the World Conference of Ministers Responsible for Youth in August 1998 that 12 August should be declared International Youth Day.
v.TheDay is aimed at celebrating young people’s contributions in preventing conflicts and to bring about transformations along with incorporation, social justice and sustainable peace.
vi.It encourages promoting the active involvement of youth in maintaining peace and security.
vii.The 2030 Agenda for Sustainable Development committed to fostering peaceful and inclusive societies.
viii.Goal 16 aims to ensure responsive, inclusive, participatory and representative decision-making at all levels.

Union Environment, Forest and ClimateChange Minister, Dr. Harsh Vardhan haslaunched ‘Gaj Yatra’ on 12th of August 2017.The goal of World Elephant Day is to create awareness about the plight of elephants and to share knowledge and positive solutions for the better care and management of captive and wild elephants.
i.It is a nationwide campaign to protect elephants on the occasion of World Elephant Day.
ii.The campaign is planned to cover 12 elephant range states that have wild elephants, using local art and craft.
iii.The Environment Minister released the All India Census 2017 Report on elephants as also the Agreed Points of Action on Trans-Boundary Conservation of Elephants by India and Bangladesh.
iv.A document is titled ‘Right of Passage’ on elephant corridors in India.During the period of the campaign, artists and craftsmen will create life-size works on the theme of elephants in places along the route of the roadshow.
v.Actor and wildlife enthusiast, Ms. Dia Mirza, participated in the walk and run event organised on the occasion along with the children.