We are here for you to provide the important current affairs August 1 2018 which have unique updates of all daily events from all newspapers such as The Hindu, The Economic Times, PIB, Times of India, India Today, Indian Express, Business Standard, all Government official websites. Our complete current affairs helps you to get more marks in Banking, insurance, UPSC, SSC, CLAT, Railway and all other competitive Exams. 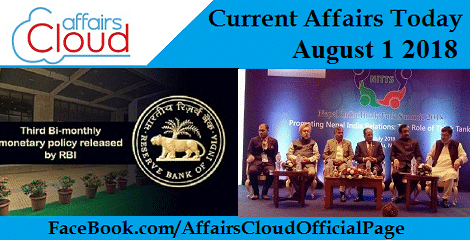 i. It has 46 amendments.
ii. It includes hiking threshold limit to Rs.1.5 crore , allowance of  employers to claim input tax credit on food, transport and insurance provided to employees under any law.
iii. It also has modification of reverse charge mechanism, separate registration for companies having different business verticals, cancellation of registration, new return filing norms and issuance of consolidated debit/credit notes covering multiple invoices.
iv. Amendments to the Central GST law, Integrated GST law, Compensation Cess law are yet to be tabled.

Cabinet approved LIC-IDBI deal of LIC acquiring 51% stake at IDBI Bank
On August 1,2018, The Union Cabinet, chaired by Prime Minister Narendra Modi , cleared the purchase of 51 per cent controlling stake in IDBI bank by state-run insurer Life Insurance Corporation (LIC).
i. According to the deal the bank will get Rs 10,000 crore to Rs 13,000 crore depending on the share price.
ii. This was done to raise the capital of the IDBI Bank to pay off debts.
iii. Earlier LIC had 7-7.5 per cent stake in the bank.
LIC:
♦ Headquarters: Mumbai.
♦ Founded: 1956.
IDBI Bank:
♦ Headquarters: Mumbai.
♦ Tagline: Aao Sochein Bada.

India, Germany sign pact for collaboration in area of sustainable urban development
On August 1, 2018, India and Germany signed an agreement on financial and technical cooperation.
i. According to this agreement, Germany will give nearly Rs 8,500 crore (1,055 million Euros) for development of India.
ii. This will focus on sustainable urban development and renewable energy in areas of sanitation, solid waste management and promotion of urban mobility.
iii. This cooperation will help reduce the greenhouse gases emission.
iv. The agreement was signed between German Ambassador to India Martin Ney from the German side and Joint Secretary, (Department of Economic Affairs), Finance Ministry, Sameer Kumar Khare from the Indian side.
v. 2018 marks 60 years of bilateral development cooperation between India and Germany.
Germany:
♦ Capital: Berlin.
♦ Currency: Euro.
♦ Prime Minister: Angela Merkel. 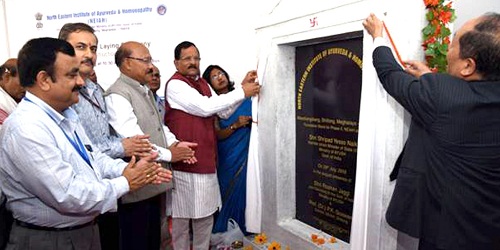 i. The estimated cost of the construction is Rs 40.80 crore.
ii. The area of the project is : 10481.53 sqm.
iii. It will have residential accommodation for students, doctors and staff and guest house.
About NIEH:
i. It is the hub for researches in Ayurveda and folk medicine for the entire South East Asia.
ii. institute will focus on cultivation and preservation of valuable medicinal plants in the region and would promote and preserve the traditional knowledge of folk medicine.
iii. Etablished in 2016. Objective:
To know the availability of vessels in the market.
Key Points:
i. The name of the portal is : Forum of Cargo-Owners and Logistics-Operators (FOCAL).
ii.  It has been designed and developed by IT Department and the Traffic Wing of IWAI.
iii.This would ensure direct interaction among the vessel operators, shippers and cargo owners.
Background:
The Government is developing National Waterways as a part of an integrated transport network strategy, which will help correct the transport. NHA signs MoU with CSC:
i. National Health Agency (NHA) functions under the Ministry of Health and Family Welfare. Its objective is to implement Ayushman Bharat-National Health Protection Mission (AB-NHPM).
ii. The MoU was signed by Dr. Indu Bhushan, CEO, National Health Agency (NHA) and Dr. Dinesh Tyagi, CEO, CSC-SPV.
iii. More than 3 lakh CSCs in 2.5 lakh Panchayats of India will become the major point of information for potential beneficiaries and help in validating the entitlement of beneficiaries.
iv. AB-NHPM aims to cover nearly 10.74 crore poor families. It has identified occupational category of urban workers’ families according to the latest Socio-Economic Caste Census (SECC) data, for both rural and urban India.
v. CSC will be given access to Beneficiary Identification System (BIS) that helps in confirming application from entitled beneficiaries through SECC and RSBY databases.
vi. BIS has already been designed and pilot testing is carried out in several States.
About Ministry of Health and Family Welfare:
♦ Minister of Health – Jagat Prakash Nadda
♦ Ministers of State for Health – Ashwani Kumar Choubey, Anupriya Patel

Rajasthan becomes first State to implement Centre’s ‘Biofuel Policy’
On August 1, 2018, Rajasthan becomes the first state to implement Centre’s ‘Biofuel Policy.’
i. For this Rajasthan has established a Centre of Excellence in Udaipur to promote research in alternate fuels and energy sources.
ii. To expand ethanol production, it has allowed using sugarcane juice and starch containing materials for production of ethanol.
iii. The state installed a biodiesel plant of capacity of 8 tonnes a day with the financial assistance of Indian Railways.
iv. These steps will help in increase in production of oil seeds and reduce country’s oil import.
v. State Rural Livelihood Development Council will also encourage women’s self-help groups (SHGs) to have additional income through supply of biodiesel.
National Policy of Biofuels:
♦ It categorizes the biofuels called Basic Biofuels into 3 categories viz. i.  First Generation (1G) bioethanol & biodiesel , ii.“Advanced Biofuels” – Second Generation (2G) ethanol, Municipal Solid Waste (MSW) to drop-in fuels and iii. Third Generation (3G) biofuels, bio-CNG among others to enable extension of appropriate financial and fiscal incentives under each category.
♦ In order to increase farmers income use of surplus food grains for production of ethanol for blending with petrol with the approval of National Biofuel Coordination Committee.
♦  It provides a funding scheme of 2G ethanol Bio refineries an amount of Rs.5,000 crore in 6 years in addition to additional tax incentives, higher purchase price as compared to 1G biofuels. India imposed safeguard duty on solar cells imports from China and Malaysia for two years
On August 1, 2018, India imposed safeguard duty on solar panels imported from China and Malaysia for 2 years.
Objective:
To protect domestic players from losing the market to them
Key Points:
i. This was recommended  by the Directorate General of Trade Remedies (DGTR), under the commerce ministry.
ii. As per the notice from Finance Ministry,

iii. Solar tariffs are currently at around Rs 2.75 per unit, on par with that of thermal power, but safeguard duty is expected to raise it by at least 50 paise.
Comparison of the imports to India’s domestic production:
i.  India has produced 842 MW solar cells in 2017-18.
ii.And the imports of the solar cells has jumped to 9,790 MW in 201 7-18 from 1,275 MW in 2014-15.
Background:
i. Solar cells, electrical devices that convert sunlight directly into electricity, are imported primarily from China, Malaysia, Singapore and Taiwan.
ii. Imports of the cells from these countries account for more than 90 per cent of the total inbound shipments in the country.
iii. An application was filed before the DGTR by the Indian Solar Manufacturers Association (ISMA) on behalf of 5 Indian producers — Mundra Solar PV Ltd, Indosolar Ltd, Jupiter Solar Power, Websol Energy Systems, and Helios Photo Voltaic — seeking imposition of safeguard duty on the imports.
iv. The period of investigation was 2014-15 to 2017-18. Following gives the comparison of the 2nd and 3rd bi-monthly rates:

Lucknow Metro, BSNL ink pact to facilitate customer services through smart cards
On August 1, 2018, Lucknow Metro Rail Corporation (LMRC) and BSNL have signed an MoU for extending benefits in customer services.
i. BSNL will use the smart card services of LMRC for collection of post-paid bills.
ii. It will also involve sale of pre-paid products like recharge vouchers and electronic top-up at LMRC Ticket Office Machine (TOM) station counters.

Scutoid: Scientists discover new shape after studying human cells
American and Spanish scientists have discovered a new 3D shape called “scutoid” during a study on how tissues are moulded to form the skin, cavity linings and the building blocks of organs.
Scutoid:
i. Scutoid has 5 sides on one end and 6 on the other end. It has a triangular surface on one of its longer edges.
ii. Scientists refer this as a twisted prism kind of shape. It enables the tissue to mould around organs.
iii. The name Scutoid refers to its similarity to the scutellum. Scutellum is the lowest segment of an insect’s midsection.
iv. Epithelial cells that cover the surface of various organs as safety shield adopt a certain geometric shape, which was earlier believed to be columnar or bottle-like. Now, the shape has been named ‘Scutoid’.
v. A paper named ‘Scutoids are a geometrical solution to the three-dimensional packing of epithelia’, has been published in Nature Communications. 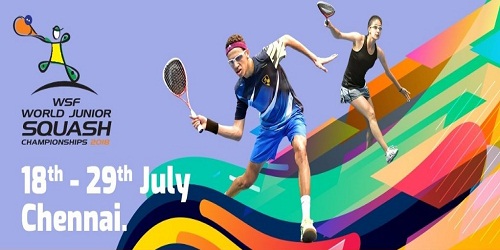 World Junior Squash Championships 2018:
i. A total of 171 players including 116 men and 55 women from 28 countries took part in the World Junior Squash Championship. Cyrus Poncha was the tournament director.
ii. The individual event for men and women was held from 18th July to 23rd July 2018. The biennial team championship for men was held from 24th July to 29th July 2018.
iii. The individuals event for men and women are held every year since 2009. The team event is biennial.
iv. Results: