We are here for you to provide the important current affairs April 6 2018 which have unique updates of all daily events from all newspapers such as The Hindu, The Economic Times, PIB, Times of India, India Today, Indian Express, Business Standard, all Government official websites. Our complete current affairs helps you to get more marks in Banking, insurance, UPSC, SSC, CLAT, Railway and all other competitive Exams. 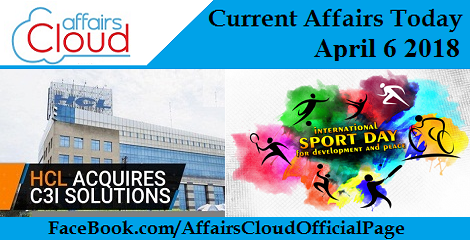 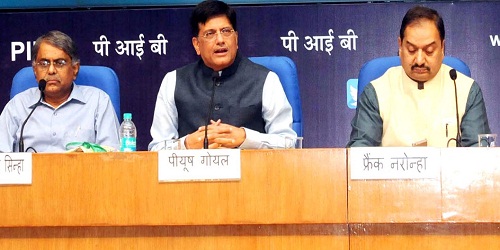 About UTTAM App:
i. Abbreviation UTTAM stands for ‘Unlocking Transparency by Third Party Assessment of Mined Coal’.
ii. UTTAM App has been developed by Union Ministry of Coal and Coal India Limited (CIL) for all citizens and coal consumers to monitor the process of Third Party Sampling of coal across CIL subsidiaries.
iii. It has been designed with an aim to make the citizens, a stakeholder in coal governance  and ensure accountability, transparency, effectiveness and efficiency in coal ecosystem.
Quick Facts about Coal India Limited (CIL):
♦ Founded in – 1975
♦ Headquarters – Kolkata, West Bengal
♦ Current Chairman – Gopal Singh CBDT forms Working Group to assess tax risks of HNWIs migrating abroad
Central Board of Direct Taxes (CBDT) has constituted a five-member working group to examine the taxation aspects related to High Net Worth Individuals (HNWIs) who are migrating abroad to other jurisdictions.
Working Group to assess tax risks of HNWIs:
i. This Working Group will be headed by Pragya Sahay Saksena, a joint secretary with Foreign Tax & Tax Research Division of CBDT.
ii. As per media reports, 23000 Indian millionaires (in dollar terms) have left India since 2004, which is alarmingly the highest in percentage terms among all countries.
iii. According to Ruchir Sharma, head of emerging markets and chief global strategist at Morgan Stanley Investment Management, in 2017 alone, 7000 millionaires left India.
iv. CBDT is concerned that this trend poses a substantial tax risk as these HNWIs may treat themselves as non-residents for taxation purposes in India even though they may have strong personal and economic ties India.
v. The working group will not only look into the tax implications arising out of such migration but will also recommend country’s policy stance for the same. Committee to regulate news portals:
i. The committee includes  Secretaries of the departments of Home, Electronics and Information and Technology, Legal Affairs, and Industrial Policy and Promotion. CEO of MyGov and one representative each of the Press Council of India and National Broadcasters’ Association will also be part of this committee.
ii. In context of this news, it is important to note that in India, print and electronic media, both are regulated but online media does not come under the ambit of any regulatory mechanism.
iii. The committee will recommend measures to bring online information dissemination under regulation and will look at international best practices on such existing regulatory mechanism.
iv. Besides, it will also propose a policy for foreign direct investment in online media.

TRAI proposes Wi-Fi grid to bring down cost of internet by 90%
On April 5, 2018, Telecom Regulatory Authority of India (TRAI) put forth a concept of open architecture-based public Wi-Fi grid to bring down the cost of the internet by 90%.
More information about public Wi-Fi grid proposed by TRAI:
i. Public Wi-Fi grid proposed by TRAI entails various providers coming together to address aspects like services, access, payment, and authentication.
ii. TRAI has already tested this concept on pilot basis and findings from the same have been presented to Union Telecom Ministry to demonstrate the proof of concept of such an architecture.
iii. TRAI Chairman R S Sharma believes that Broadband proliferation across the country is an important pillar of Digital India and Wi-Fi is the cheapest option owing to low cost of equipment and free spectrum.
Quick Facts about TRAI:
♦ Founded in – 1997
♦ Headquarters – New Delhi
♦ Current Chairman – R S Sharma 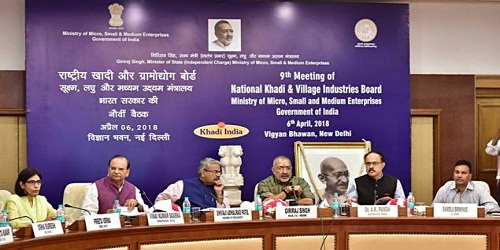 iii. Users of Amma Free Wi-Fi zones will be offered 20 minutes of free internet service per day. After that the users will be charged Rs 10 per hour.
iv. This scheme will be implemented in 50 spots by Tamil Nadu Arasu Cable TV Corporation (TACTV). Cost of this project is Rs 8.50 crore.
Some dams in Tamil Nadu:
♦ Mettur Dam – Cauvery River
♦ Amaravathi Dam – Amaravathi River Qatar introduces national service for women:
i. On 4th April 2018, the Law No. 5 of 2018 on national service was issued by Emir Tamim bin Hamad al-Thani.
ii. According to the law, women above the age of 18 can volunteer for national service. Men between the ages of 18 and 35 are required to perform compulsory military service, and now the service period has been increased from three months to one year.
iii. The new law also states that men must apply for compulsory enlistment in the military service within 60 days of turning 18 years.
iv. Persons who are caught avoiding military service will be imprisoned up to three and a fine of up to 50,000 Qatari riyals will be imposed.
About Qatar:
♦ Prime Minister – Abdullah bin Nasser bin Khalifa Al Thani
♦ Capital – Doha 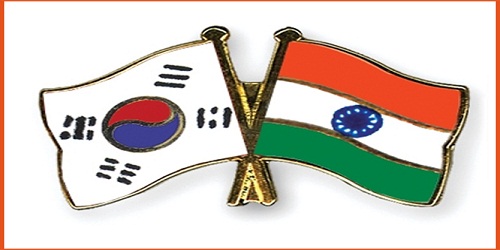 Highlights of SAHYOG-HYEOBLYEOG 2018:
i. The exercise was a part of a proposed establishment of the memorandum of understanding (MOU) between Indian Coast Guard and South Korea Coast Guard to improve maritime security in Indian Ocean Region.
ii. As a part of this exercise, ships of the Indian Coast Guard and Korean Coast Guard ship ‘BADARO’ jointly undertook tactical manoeuvres and drills  to counter piracy and carry out maritime law enforcement tasks.
iii. Along with ICG Shaurya, C-423, C-431, Indian Coast Guard also deployed a Dornier aircraft to carry out sea-air coordinated search.
iv. In addition to the drills, experts from both sides held skilled academic discussions to share each other’s experiences on varied topics for mutual benefit.
Quick Facts about Indian Coast Guard:
♦ Established in – 1978
♦ Headquarters – New Delhi
♦ Current Director General – Rajendra Singh 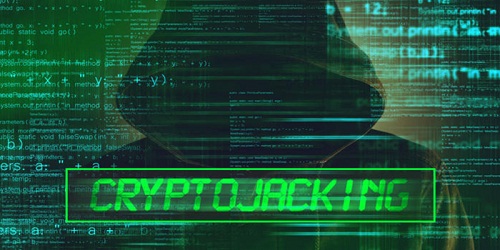 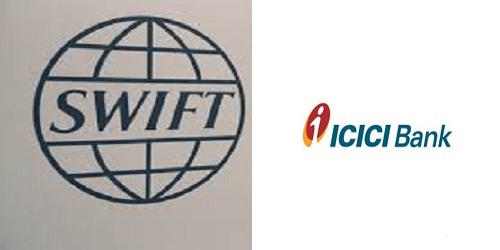 ICICI Bank goes live with SWIFT’s gpi Tracker:
i. The improved cross-border payments service which is being referred to is the gpi (Global Payment Innovation) Tracker, which has been extended to cover all payment instructions sent across the SWIFT network.
ii. SWIFT’s gpi tracker enables real-time payments tracking across correspondent banks and has a facility to track the payments instructions across the correspondent banks globally.
iii. At a later stage, SWIFT is also planning to add another feature that has an ability to stop and recall payment in case of a fraud or when a duplicate payment has been sent erroneously.
Quick Facts about ICICI Bank:
♦ Founded in – 1994
♦ Headquarters – Mumbai, Maharashtra
♦ Current MD & CEO – Chanda Kochhar
♦ Tagline – ‘hum hai na’, ‘khayaal aapka’

Flipkart signed a pact with MakeMyTrip
On 5th April 2018, MakeMyTrip Limited, and Flipkart announced that they have entered into a partnership regarding online bookings in the travel segment. Flipkart signed a pact with MakeMyTrip:
i. Various brands of MakeMyTrip like MakeMyTrip, Goibibo, and redBus, will utilize the customer base of Flipkart to increase online travel bookings.
ii. Initially, domestic flight booking will be made available in Flipkart, which will be launched soon. Later hotel booking and bus ticket booking will also be made available on Flipkart.
About MakeMyTrip:
♦ Founder and group CEO – Deep Kaira
♦ Headquarters – Gurugram, Haryana