We are here for you to provide the important current affairs April 3 2018 which have unique updates of all daily events from all newspapers such as The Hindu, The Economic Times, PIB, Times of India, India Today, Indian Express, Business Standard, all Government official websites. Our complete current affairs helps you to get more marks in Banking, insurance, UPSC, SSC, CLAT, Railway and all other competitive Exams. 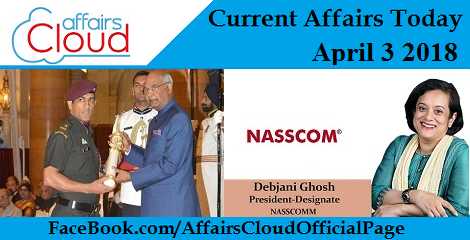 i. 39 of the 40 Indian labourers were killed by Islamic State terrorists in Iraq, while one of them managed to escape.
ii. Mortal remains of 38 of these 39 Indians were brought back to India on April 2, 2018 in a special aircraft and handed over to their relatives.
iii. 27 hailed from Punjab, 6 from Bihar, 4 from Himachal Pradesh and 2 from West Bengal. Import duty on key smartphone components:
i. Components on which 10 per cent import duty has been imposed are  printed circuit board assembly, loaded or stuffed printed circuit boards (for telephones as well as mobile phones), camera module and connectors of cellular mobile phones.
ii. So far, these three components were exempted from basic customs duty (BCD).
iii. Indian Government has already imposed 15 per cent import duty on chargers, battery, speaker, microphone, headset, keypad etc. under phased manufacturing programme (PMP) aimed at boosting indigenous production of mobile phones, by providing tax relief and other incentives on components and accessories used for the devices.
iv. In context of these news, it is important to note that India has replaced Vietnam to become the second largest producer of mobile phones in 2017. 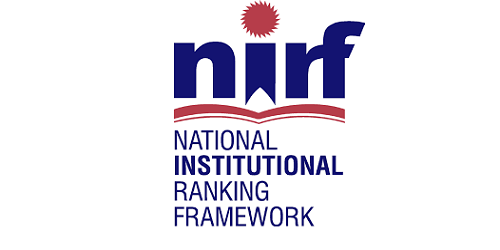 IISc – overall best institution in India:
i. On 3rd April 2018, HRD minister Prakash Javadekar announced the rankings at an event in Vigyan Bhavan, New Delhi.
ii. In the university category, IISc secured the top spot. It was followed by Jawaharlal Nehru University (JNU) in the second position and Banaras Hindu University (BHU) in the third spot.
Other top institutions as per the National Institutional Ranking Framework (NIRF):

Monument Mitras:
i. Adopt a Heritage Project aims to provide world class tourist facilities at the natural/cultural heritage sites.
ii. Main focus of the project will be to provide basic facilities like cleanliness, public convenience, drinking water, ease of access for tourists, signage etc. and advanced facilities like Souvenir shop, Cafeteria etc.
iii. The project envisions that selected public sector companies, private sector companies and individuals will create tourist facilities at heritage sites.
iv. Those entities will be named ‘Monument Mitra’. They will adopt the sites under Corporate Social Responsibility (CSR) programme.
v. They will manage operations and maintenance of the adopted site initially for 5 years. The work will be reviewed at any time.
vi. The project was launched by the President on 27th September 2017 (World Tourism Day).
vii. Information regarding this was revealed by K. J. Alphons, Union Minister of State (I/C) for Tourism in Lok Sabha on 2nd April 2018.
Some important bird sanctuaries in India:
♦ Thattekad Bird Sanctuary – Kerala
♦ Great Indian Bustard Sanctuary – Maharashtra
♦ Vedanthangal Bird Sanctuary – Tamil Nadu

Suresh Prabhu Launches Digital Initiative for Ease of Export
On April 3, 2018, Union Commerce and Industry Minister, Suresh Prabhu launched digital initiatives by Export Inspection Council (EIC) for ease of export at New Delhi.
Digital Initiatives for ease of export:
i. EIC is the official export certification body of Government of India.
ii. Three online portals have been developed in line with Digital India initiative to make it easier to export farm products from India and reduce transaction costs.
iii. Entire export food chain has been integrated with these platforms by linking primary production, aquaculture pond, dairy farms and apiaries.
iv. The One lab one assessment portal brings together all stakeholders like accreditation bodies, regulators and laboratories on a single platforms and thus provides simplified procedures for granting joint certification and joint decisions which will help in reducing cost, time and multiplicity of assessment.
v. The Export Alert Monitoring portal monitors non compliances raised by importing countries. It will enable monitoring of alerts and action taken by multiple organizations involved in initial certification in the food safety & biosecurity. 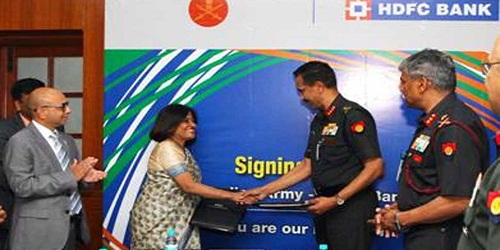 Details about Indian Army – HDFC Bank MoU:
i. The first MoU between HDFC Bank and the Indian Army for Defence Salary Package was signed in 2011 and was renewed in March 2015.
ii. The current MoU is tailor made to suit the requirements of serving soldiers, pensioners and families.
iii. As per the terms of the current MoU, in addition to other benefits, the Army personnel having accounts in HDFC Bank will get free personal accident death cover and free permanent disability cover of Rs 30 lakhs, free educational cover of upto Rs 1 Lakh per year for four years for education of dependent child in case of accidental death of defence personnel and 100% processing fees waived for Car Loans and Personal Loans.
Quick Facts about HDFC Bank:
♦ Founded in – 1994
♦ Headquarters – Mumbai, Maharashtra
♦ Current MD – Aditya Puri
♦ Tagline – ‘We Undertand Your World’

CBDT signs 14 unilateral, 2 bilateral APAs in March
During the month of March 2018, Central Board of Direct Taxes (CBDT) entered into 16 more Advance Pricing Agreements (APAs), taking the total number of APAs to 219 so far.
Details about APAs signed by CBDT:
i. Out of the 16 APAs signed in March 2018, 14 are unilateral APAs and 2 are bilateral APAs with US and pertain to sectors like telecom, IT, automobile, pharmaceutical, beverage, banking and insurance.
ii. Out of all APAs entered into by the CBDT till date, 199 are Unilateral APAs and 20 are Bilateral APAs.
iii. In financial year 2017-18, CBDT entered into 67 APAs so far, out of which, 58 are Unilateral and 9 are Bilateral.
iv. APA provisions were introduced in the Income-tax Act, 1961 in 2012. Objective of APA scheme is to provide certainty to taxpayers in the domain of transfer pricing by specifying the methods of pricing and thereby reducing litigation. 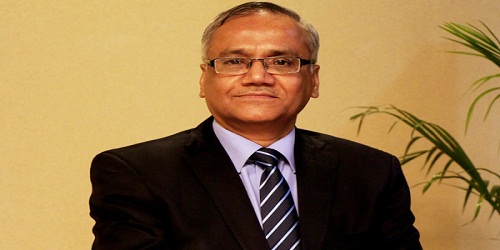 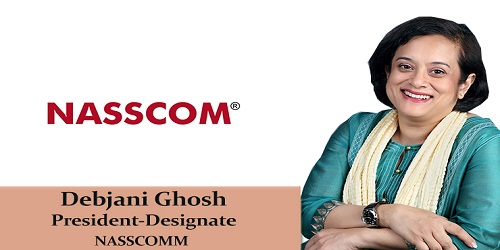 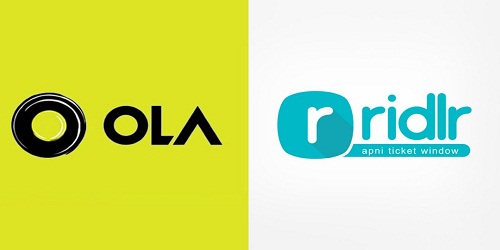 Ola Acquires Ticketing App Firm Ridlr:
i. Ola has acquired Ridlr in an all-stock deal. The valuation of the deal was not revealed.
ii. Ridlr was established in 2012. It is based in Mumbai. It enables users to search and book public transport options through its mobile app.
iii. Ridlr will become a wholly-owned subsidiary of ANI Technologies. ANI Technologies owns Ola brand.
iv. Brijraj Vaghani, founder of Ridlr, will continue to lead the operations. Ridlr’s team of 64 employees will become a part of Ola.
About Ola:
♦ CEO – Bhavish Aggarwal
♦ Headquarters – Bengaluru 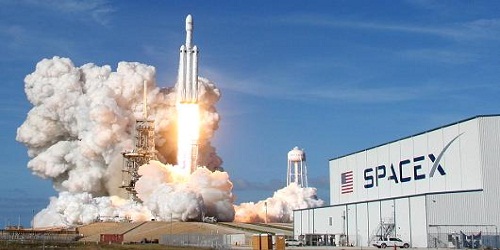 SpaceX successfully launched its Falcon 9 rocket:
i. The spacecraft carries 2,630 kg of research, crew supplies and hardware. It took off from Space Launch Complex 40 at Cape Canaveral Air Force Station in Florida on 2nd April 2018.
ii. Ten minutes after the take-off, the second stage engine burned out completely and Dragon separated from its Falcon 9 second-stage rocket. Later, the solar arrays were deployed.
iii. It is expected to reach the International Space Station on 4th April 2018. It will return to Earth in May 2018 with results of a few completed experiments.
iv. Flight Engineers Norishege Kanai of the Japan Aerospace Exploration Agency and NASA astronaut Scoot Tingle will overlook the operation of the Canadarm2 robotic arm for Dragon’s capture.
v. After capture, mission control in Houston will send ground commands for the station’s arm to rotate and install it on the bottom of the station’s Harmony module.
vi. This mission will focus on scientific investigations such as a study on severe thunderstorms on Earth, effects of microgravity on production of high-performance products from metal powders, and food growth in space.
vii. The spacecraft also carried cargo for testing effects of harsh space environment on materials, coatings and components; identifying potential pathogens on the station and investigating an antibiotic-releasing wound patch.
About SpaceX:
♦ CEO – Elon Musk
♦ Headquarters – California, U.S.

Rare dinosaur footprints found on Scottish island
Rare dinosaur footprints that are 170 million years old have been discovered in the north-east coast of Isle of Skye in Scotland.
Rare dinosaur footprints found on Scottish island:
i. Researchers from the University of Edinburgh were involved in this discovery. The study has been published in the Scottish Journal of Geology.
ii. Majority of the footprints were made by sauropods and theropods. The sauropods were long-necked and two metres tall. The theropods were also of the same size.
iii. Around 50 footprints were measured, photographed and analysed by the researchers in a tidal area. This discovery is considered important as it is a rare evidence of the Middle Jurassic period.
Some important dams in India:
♦ Sardar Sarover Gujarat Dam – Narmada River
♦ Srisailam (N.S.R.S.P) Dam – Krishna River
♦ Nagarjuna Sagar Dam – Krishna River

Fimbristylis agasthyamalaensis: New plant species discovered in Western Ghats
Researchers from the University College, Kerala, have reported the discovery of “Fimbristylis agasthyamalaensis”, a new plant species from the Western Ghats.
Fimbristylis agasthyamalaensis:
i. The researchers discovered this species in the marshy grasslands of Ponmudi hills in the Agasthyamala Biosphere Reserve.
ii. It has been classified as a sedge. It is a grass-like plant. It has been named Fimbristylis agasthyamalaensis after the locality from which it was discovered.
iii. The discovery was made during a survey as part of a project funded by the Women Scientists Division of the Kerala State Council for Science, Technology and Environment (KSCSTE).
iv. The discovery has been published in Phytotaxa. This species belongs to the Cyperaceae family. Flowering and fruiting were observed from October to March.
v. A preliminary conservation assessment for the new species as ‘critically endangered,’ has been recommended. It is said that, the species is heavily prone to wild grazing.
About Kerala State Council for Science, Technology and Environment (KSCSTE):
♦ President – Chief Minister of Kerala, Pinarayi Vijayan
♦ Headquarters – Thiruvananthapuram, Kerala 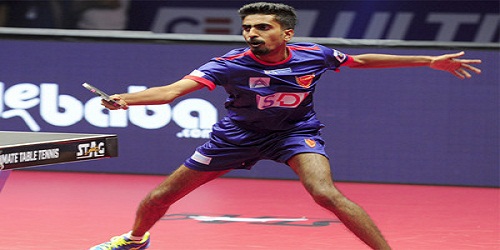 Indian Players in Latest ITTF Ranking:
i. Gnansekaran performance has been on an upward trajectory since past six months as he won gold in the ITTF Challenge – Spanish Open in November 2017 and reached the pre-quarterfinals of the Qatar Open in March 2018.
ii. Veteran Table Tennis player Achanta Sharath Kamal has registered a phenomenal jump of 22 places to be at 48 in the latest ITTF Ranking.
iii. Soumyajit Ghosh (70), Harmeet Desai(74), Anthony Amalraj (83) and Sanil Shetty (84) are the other Indian Table Tennis players in top 100.
iv. Among Indian Woman Table Tennis Players, Manika Batra continues to rank highest at 58, followed by Mouma Das at 88.
Quick Facts about International Table Tennis Federation (ITTF):
♦ Formed in – 1926
♦ Headquarters – Lausanne, Switzerland