Dear Readers, We cover some important news in Current Affairs Today April 19 2017, which are not covered in Daily Detailed News, More Current Affairs coverage will help you to Score Good Marks in Competitive Exams. 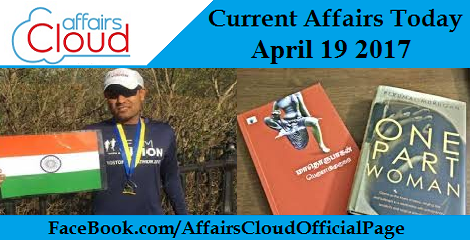 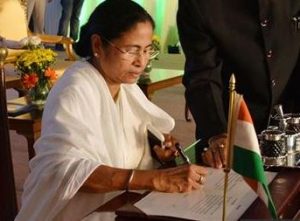 India’s skewed sex ratio to worsen further says a Government report titled ‘Youth in India’
According to the report of “Youth in India” the sex ratio in India falls to 898 girls for 1,000 boys in 2031 from 939 in 2011.
Major Highlights:
i. From the analysis of census and the World Bank India’s sex ratio has been decreasing since 1991.
ii. By 2010, India accounted for 17.8% of the world population an increase of 2.7% since 1970.
iii. It is projected to continue and by 2030, young Indians would account for 17.97% of global population.
iv. The projection is based on very low sex ratio at birth in India. The number of girls born for 1,000 boys — the definition of sex ratio — was 914 in 2011 and is projected to fall further in coming decades.
v. As per the report the suicide among youth accounted for 33% ofsuch deaths in India in 2015, a 3% percentage point increase since 2010.
vi. The biggest reason and main contributor of suicides is disagreement and conflict in relationship. 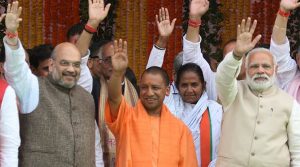 ii. The Agra Airport will be renamed after RSS ideologue Pandit Deen Dayal Upadhyay airport.
iii. The Department of Disabled Welfare will now be known as ‘Divyang Jan Vikas Empowerment’.
iv. The Yogi government also decided to name the Civil Terminal named Mahayogi Gorakhnath, at Gorakhpur Air Force Base.
v. The cabinet also approved the decision to open 20 new agricultural centers.
vi. The crop insurance scheme also has approved by the cabinet’s nod and it would be implemented in next two years. 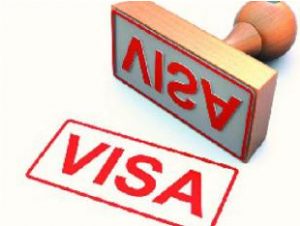 ii. Trump wants to bring a more merit and transparent way of giving visas to highly skilled workers instead of the present lottery system.
iii. Trump wants Americans to give first preference.
iv. In the document titled “Buy American and Hire American” order, Trump seeks to make modifications in government procurement that would give a push for purchases of American products in federal contracts.
About H1B Visas
♦ The ‘H’ visas are for temporary workers.The H1B Visas are for foreign skilled workers in occupations that generally require higher education, including science, engineering or computer programming.
♦ The H1B visas are given through a lottery system.
♦ Every year, the US government awards 65,000 H1B visas and randomly distributes another 20,000 to graduate student workers. 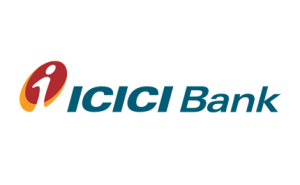 RBI caps bank’s exposure to REITs, InvITs at 10%
The RBI has allowed banks to invest up to 10 per cent of the unit capital of a Real Estate Investment Trust (REITs) or Infrastructure Investment Trusts (InvITs).
Key Points:
i. In its first bimonthly monetary policy of 2017-18, the RBI had permitted banks to invest in REITs and InvITs.
ii. It main objective is to help strenghten the cash-starved infrastructure sector.
iii. Introduction to REITs/InvITs will be within the overall ceiling of 20 per cent of the net worth.
iv. Banks are permitted for direct investments in shares, convertible bonds/ debentures, units of equity-oriented mutual funds and Venture Capital Funds (VCFs).
v. SEBI has kept regulations for REITs and InvITs and allow banks to invest in these schemes.
vi. Banks will have to safeguard guidelines n equity investments, classification and valuation of investment portfolio, Basel III Capital requirements for commercial real estate exposures and large exposure framework.

HPCL and Rajasthan Govt. sign revised Rs 43129 crore Mou for Barmer refinery
HPCL oil firm and Rajasthan government has signed a MoU for Rs 43,129 crore.
Key Points:
i. Memorandum of association is signed for oil refinery in Barmer district which will produce BS-VI fuel.
ii. The state government will have 26 per cent stake in the refinery project while HPCL will have the rest shareholding.
iii. Under this the refinery cost has come down to Rs 16,845 crore, which was Rs 56,040 crore in the previous MoU.
iv. The Barmer refinery will be the first in the country to produce BS-6 standard fuel.
v. Apart from 43,129 crore, additional Rs 27,000 crore investment will be made in the refinery, oil field and petro-chemical complex.
vi. Rajasthan State Gas Limited (RSGL) signed the MoU with Gail authorities to supply domestic gas to households.

Pakistan Hindu youth selected for prestigious US award
Raj Kumar, a Hindu youth from Pakistan has been selected for the prestigious ‘Emerging Young Leaders Award’ given by the US State Department for the positive role played by youngsters in building sustainable peace.
♦ This is the 2nd edition of ‘Emerging Young Leaders Award’. Along with Raj Kumar, 9 other youngsters from Malta, Sri Lanka, Afghanistan, Algeria, Tajikistan, Belgium, Vietnam, Peru and Israel have also been chosen for this award.
Accomplishments of Raj Kumar:
i. He served in various leadership positions within Pakistan-US Alumni Network (PUAN) 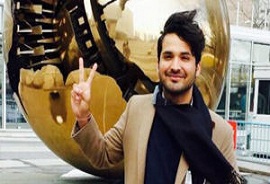 and secured grants totalling USD 10,000 for projects focusing on countering violent extremist voices and promoting pluralism in society.
ii. Raj Kumar along with his team, brought together 500 community members from different ethnic and religious backgrounds to paint and share messages of peace through art and Sufi music, as well as teach teamwork and sportsmanship lessons.
iii. He also provided training to women about Pakistani laws that protect their rights.

Devendra Kumar Sharma appointed as new BBMB chairman
Bhakra Beas Management Board (BBMB) has appointed Devendra Kumar Sharma as a Chairman for a period of 3 years.
Important Highlights:
i. Devendra Sharma is serving as the Managing Director of Himachal Pradesh Power Corporation Limited
ii. He was also associated with the industrial giant Larsen & Toubro for a long time in its infrastructure development projects.
iii. His appointment was approved by Appointment Committee of Cabinet.
iv. BBMB has managed the release of water in Punjab, Haryana and Rajasthan and it controls Bhakra, Pong and other dams.
v. He has been associated with the power sector for over 30 years. He was involved in implementing and commissioning of Tata Hydro Power Station in Bhutan.
vi. BBMB temporary charge was given to SK Sharma Member of Irrigation under BBMB.

Gayle becomes first cricketer to score 10,000 runs in T20
Chris Gayle became the first cricketer to score 10,000 runs in T20 cricket. He accomplished this feat while playing for Royal Challengers Bangalore against Gujarat Lions in an Indian Premier League (IPL), 2017 match.
i. Before the start of the 2017 IPL, Gayle needed 63 runs to reach the 10,000 milestone. He scored 32, 6, 22 in the three matches he played prior to the one in which he achieved the 10000 runs mark.
ii. As of now, Gayle is the only cricketer in the 10,000 club in T20s. No other batsman has crossed even 8,000 runs mark in T20s. Highest run-scorer after Gayle is Brendon McCullum (7596). Brad Hodge has scored 7338 runs while David Warner has scored 7156 runs.

Visually impaired Indian runner Sagar Baheti completes historic Boston Marathon
India’s Sagar Baheti on 17 April 2017 became the first visually impaired Indian runner to complete the historic Boston Marathon.
Important Points:
i. In 2013, he was diagnosed with Stargardt’s disease. It is a type of macular degeneration that eventually leads to blindness.Baheti is a businessman by profession. 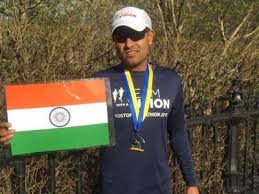 ii. It was Supported by the Massachusetts Association for the Blind and Visually Impaired (MABVI)
iii. Baheti completed a distance of 42.16 kilometres in just over four hours.
iv. The 31-year old runner finished the 121st Boston Marathon as one of 30000 runners.
About Boston Marathon
♦ The Boston Marathon is an annual marathon hosted by several cities in greater Boston in eastern Massachusetts, United States.The marathon first began in 1897.
♦ It also is one of the sixth World Marathon and it is always held on Patriots’ Day.
♦ It is the world’s oldest annual marathon and ranks as one of the world’s best-known road racing events.
♦ The 2017 Boston Marathon has been recorded as the second hottest in a decade

ICC names Ganguly, Ponting as commentators for upcoming Champions Trophy
International Cricket Council (ICC) has named former Indian Cricket Team Captain, Sourav Ganguly and former Australian Cricket Team Captain, Ricky Ponting  as commentators for the upcoming Champions Trophy, scheduled to be held in England from 1-8 June 2017.
i. Some of the other former captains in the commentator line-up include Brendon McCullum of New Zealand, Kumar Sangakkara of Sri Lanka and Graeme Smith of South Africa.
ii. This tournament will see a state-of-the-art coverage through 34 cameras at every game, including eight ultra-motion Hawk-Eye cameras, front and reverse view stump cameras and a Spidercam.
iii. For the first time in cricket coverage, six Player Tracking cameras will be used in each match.

A top maoist leader Narayan Sanyal has passed away on April 18, 2017.He played a key role in mergers of Naxalite factions.
i. Sanyal was known for his keen interest in football.
ii. He was born in Born in an affluent family in undivided Bengal’s Bogra district.
iii. He was the Polit Bureau member of the CPI (Maoist).