We are here for you to provide the important Current Affairs October 12 2018, which have unique updates of all daily events from all newspapers such as The Hindu, The Economic Times, PIB, Times of India, PTI, Indian Express, Business Standard and all Government official websites. India’s first ever National Environment Survey to commence in 24 states, 3 UTs in Jan, 2019
On October 11, 2018, it was announced that India’s first ever National Environment Survey (NES) will commence from 55 districts across 24states and three Union Territories in January 2019.
About the Survey:
i. This survey will be conducted by Environmental Information System (ENVIS)
ii. The skilled manpower required for the survey will be provided from persons skilled and trained under MoEFCC’s Green Skill Development Programme.
iii. The result of the survey would be available in 2020.
iv. Thus, the first set of data will be compiled in one year to cover seasonal cycles in terms of air pollution and flora & fauna.
v. It is aimed to rank all the districts on their environmental performance and document their best green practices.
vi. It will consist of using grids measuring 9×9 km, to collect comprehensive data on various environmental parameters like:  air, water, soil quality; emission inventory; solid, hazardous and e-waste; forest & wildlife; flora & fauna; wetlands lakes, rivers and other water bodies.
vii. This green data will help in decision making at all levels – district, state and national level.
viii. All 716 districts in the country are expected to be surveyed in a period of three to four years.
Ministry of Environment, Forest & Climate Change (MoEFCC):
♦ Union Minister: Dr. Harsh Vardhan.
♦ Minister of State: Dr. Mahesh Sharma. The report was released by Dr Harsh Vardhan, Hon. Minister of Environment, Forest, and Climate Change.
i. The report states that forest fires are the leading cause of forest degradation in India.
ii. Inspite of having increased forest cover to over 20 percent of its geographical area, regeneration is either inadequate or absent in about 45 percent of all forest areas.
iii. About 95 percent of all forest plots inventoried show some signs of degradation.
iv. The report also discusses policies on forest fire prevention and management (FFPM) at the national, state and local levels.
v. It recommended five broad themes for better measures–

vi. In case of good management, i.  The Website for Aero India 2019 is: (https://aeroindia.gov.in).
ii. The portal facilitated payment of registration fee online for business visitors.
iii. Furthermore, it has been integrated with multi-currency Payment Gateway where Indian companies would be able to pay in Indian Rupees using Credit Card/Debit Card/Net Banking/UPI/NEFT/RTGS and foreign companies would be able to pay in US dollars using credit card/debit card.
iv. It will also host latest information about the various events in the Aero India 2019 show.
v. It was made to commemorate the 12th edition of “Aero India 2019” that will be hosted by India at Air Force Station, Yelahanka, Bengaluru, (Karnataka) from 20 to 24 February, 2019.
vi. The five-day event will combine a major trade exhibition of the aerospace and defence industries with public air shows.
vii. In Aero India 2019, close to 500 companies both Indian and Foreign companies are expected to participate.
Defence Ministry:
♦ Union Minister: Smt. Nirmala Sitharaman.
♦ Minister of State: Shri Subhash Ramrao Bhamre.
♦ Secretary: Shri Sanjay Mitra. 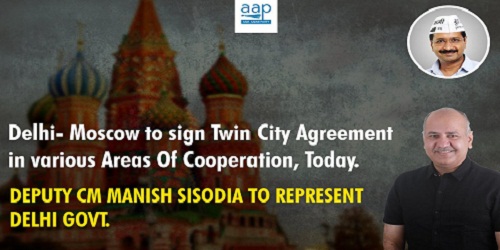 Key Points:
i. The agreement was signed by Minister of the Moscow City government and head of its international relations Sergey Cheremin and Delhi Deputy Chief Minister Manish Sisodia.
ii. The two governments have mutually agreed to extend the Twining Agreement for a period of 3 years, from November 1, 2018, in environmental protection and air pollution control, cultural and tourism, healthcare, education, sports, transport management and e-governance.
iii.  The agreement will also help in enhancing friendship and cooperation between the two cities and maintain regular contacts between the two governments.
Some wildlife sanctuaries in Delhi:
♦ Najafgarh drain bird sanctuary
♦ Asola Bhatti Wildlife Sanctuary 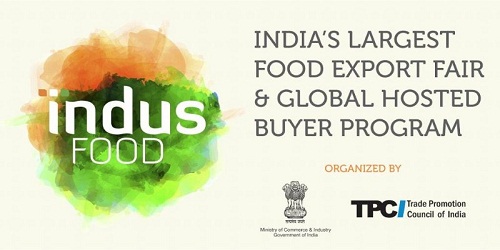 Key Points:
i.  Indusfood-II is an export focused annual F&B (Food and Beverage) trade fair. It will exhibit India’s best food, beverages and agri products to global buyers.
ii. It is organized by Trade Promotion Council of India (TPCI) along with commerce and industry ministry.
iii. Over 600 global buyers from nearly 50 countries will participate in Indusfood-II.
iv. Delegations from various countries will be involved in strategic purchase of food commodities through investments or long-term purchase agreements to achieve the food security of their country or to supply their food processing industries.
v. Indusfood-I, the first edition of this trade show, was held in early 2018.
About Trade Promotion Council of India (TPCI):
♦ President – Prashant Garg
♦ Location – New Delhi

Rs 50 lakh compensation given to former ISRO scientist by Kerala govt
On October 9, 2018, 76-year old, former ISRO scientist, Nambi Narayanan was given Rs 50 lakh by the Kerala government in compliance with a September 14 Supreme Court order.
i. This was given at a function organised at the state secretariat in Thiruvananthapuram.
ii. The order required the awarding the compensation to him for being falsely implicated in the 1994 espionage case.
iii. In the order, the Supreme Court directed the state government to pay the compensation within eight weeks. This index has been compiled by advisory firm Henley & Partners.
i. The index is based on exclusive data from the International Air Transport Association.
ii.  Japan passport holders now enjoy visa-free access to 190 destinations, compared with Singapore’s 189.
iii. Germany has fallen to 3rd place, tied with South Korea and France with 188 visa-free destinations.
iv. Denmark, Sweden, Finland, Spain, Italy tied at the 4th place with 187 destinations.
v. Former top spot holders the United States and the United Kingdom, who tied for No. 1 in 2015, are now at No. 5.
vi. Iraq and Afghanistan are at the bottom (No. 106) with just 30 destinations.
vii. The most powerful passport in the Middle East is of United Arab Emirates at 21st position.
viii. Russia is at 47th place, China at 71st , India at 81st (with 60 country accesses).
About Henley & Partners:
Group Chairman: Dr. Christian H. Kalin.

RBI injected Rs 12,000 crore into system on Oct 11 to manage liquidity
On October 10, 2018, Reserve Bank announced injection of liquidity worth Rs 12,000 crore into the system through purchase of government bonds on October 11 under Open Market Operations.
i. The government will purchase bonds with maturity ranging between 2020 to 2030.
ii. As part of the OMOs, the purchase of government securities maturing will bear interest rate of:

Background:
i. OMOs are the tools which can be used to either inject or drain liquidity from the system.
It is employed to adjust rupee liquidity conditions in the market on a durable basis.
ii.  If there is excess liquidity, the RBI resorts to sale of securities and sucks out the rupee liquidity. Similarly, when the liquidity conditions are tight, it buys securities from the market, thereby releasing money into the market.
RBI:
♦  Founded: 1st April 1935.
♦  Headquarters: Mumbai.
♦  24th Governor: Dr. Urjit Patel.

India’s debt lower than best, emerging market economies: IMF
On October 11, 2018, IMF clarified that India’s debt is lower than the global average as percentage of world GDP.
i. According to IMF, the global debt has reached a new record high of USD 182 trillion in 2017.
ii. In India, private debt in 2017 was 54.5 per cent of the GDP and the general government debt was 70.4 per cent of the GDP totaling upto 125% of the GDP..
iii. Since the end of 2015, 2016 and 2017 , the private debt in India has declined from almost 60 per cent to 54.5 which makes India steady.
iv. However, China has a high debt percentage of 247 per cent of the GDP.
v. As per measures, governments have been advised to: i. Under the MOU, SBI will help establish a mutually beneficial strategic alliance for NBI’s human resources development by providing education, training and research.
Other News:
Apart from SBI, the apex banking academy of Nepal, National Banking Institute (NBI)  is already in tie ups with leading institutions in Indiaincluding IIMs, MDI, ISB.
SBI:
♦ Headquarters: Mumbai.
♦ Chairman: Rajnish Kumar.
♦ Tagline: With you all the way, Pure Banking Nothing Else, The Nation’s banks on us.
National Banking Institute (NBI):
Headquarters: Kathmandu.

NSE signs pact with Uttarakhand government to enhance MSMEs growth in state
On 10th October 2018, National Stock Exchange (NSE) signed a Memorandum of Understanding (MoU) with the Uttarakhand government to offer access to capital to MSMEs (Micro, Small and Medium Enterprises) to enhance their growth in the state.
Key Points:
i. This MoU aims to improve the SMEs and start-ups by creating awareness on opportunities to raise capital, SME exchange guidelines, listing processes, compliances with listing agreement, etc.
ii. NSE will support the government to improve the financing opportunities for MSMEs in Uttarakhand, by listing on NSE’s SME platform named Emerge.
iii. The government will help MSMEs to get listed on NSE Emerge platform, by helping them financially or in other ways to bear the expenses related to listing.
iv. NSE’s SME Platform has 182 companies listed, which together raised over Rs 2,850 crore .The total market capitalisation of these companies will be Rs 11,300 crore.
About National Stock Exchange (NSE):
♦ Chairman – Mr. Ashok Chawla
♦ MD & CEO – Mr. Vikram Limaye
♦ Headquarters – Mumbai Key Points:
i. More than 40 high school students will undergo a 2-week paid internship at the IBM Bengaluru campus.
ii. They will be imparted skills in areas like artificial intelligence, Internet-of-Things, cybersecurity, cloud computing and blockchain. They will also be taught critical workplace skills.
iii. Also, select teachers will be trained by IBM volunteers and mentors to become innovation coaches.
iv. This collaboration between IBM India and NITI Aayog will expose students to new technologies and make them future-proof.
About IBM India Pvt. Ltd:
♦ Chairman – Vanitha Narayanan
♦ Managing Director – Karan Bajwa 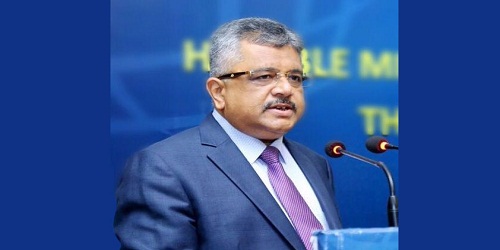 Key Points:
i. Tushar Mehta replaces Ranjit Kumar. The post had been lying vacant since October 20, 2017.
ii. Appointment Committee of the Cabinet (ACC) has approved his appointment for a period till June 30, 2020.
iii.Tushar Mehta became Additional Solicitor General (ASG) in 2014. Solicitor General is a legal officer who represents a state or central government in legal proceedings.

HDFC Bank appoints Vinay Razdan as Chief Human Resources Officer
HDFC Bank has appointed Vinay Razdan as its chief human resources officer (CHRO).
Key Points:
i. Vinay Razdan will be responsible for the complete human resource operations in HDFC Bank.
ii. Previously, he was CHRO in Idea Cellular. He had joined Idea in 2006.
iii. He has held leadership positions in organisations like ITC, HCL Technologies and Idea Cellular.
iv. He has vast experience in various sectors like FMCG, IT services and telecommunications.
About HDFC Bank:
♦ Managing Director – Aditya Puri
♦ Headquarters – Mumbai

v. The report states that climate change is increasing the frequency and severity of extreme weather events. 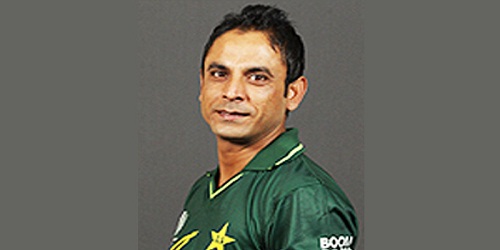