We are here for you to provide the important Current Affairs November 3 2018, which have unique updates of all daily events from all newspapers such as The Hindu, The Economic Times, PIB, Times of India, PTI, Indian Express, Business Standard and all Government official websites. 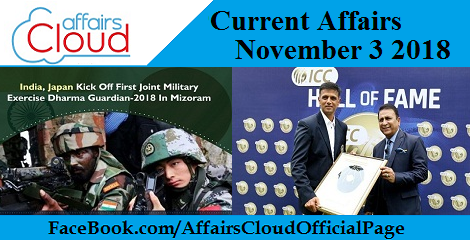 The Fourth NITI Aayog- DRC Dialogue Held in Mumbai
On November 1, 2018, the 4th Dialogue of the NITI Aayog – Development Research Centre (DRC) of the State Council, Peoples’ Republic of China was held in Mumbai.
i. The Chinese delegation was led by Mr. Li Wei, President of DRC and
The Indian delegation was led by Dr Rajiv Kumar, Vice Chairman of NITI Aayog.
ii. This is the second ministerial dialogue between China and India since the meeting of Chinese President Xi Jinping and Indian Prime Minister Narendra Modi in Johannesburg during the BRICS summit in July 2018.
iii. The Fifth edition of the NITI – DRC Dialogue will be held in Wuhan, China in November, 2019

i. It was hosted by Confederation of Indian Industry (CII) in collaboration with Columbia Pacific Communities as their Premium Partner .
ii. Hon’ble Minister of State for Ministry of Health and Family Welfare, Government of India, Ms. Anupriya Patel delivered the key note address and released the CII report- “Igniting Potential in Senior Care Services”.
iii. The conclave aimed to discuss, debate and catalyze the growth of the sector by unlocking latent and potential opportunities.
iv. It consisted of 4 planery sessions and 2 special sessions. They are as follows:

Initiatives of the Health Ministry in Senior Care sector:
In her address in the Conclave, Minister of state Smt. Anupriya Patel highlighted the initiative of the Health Ministry in this regard with the “National Programme for the Health Care of Elderly (NPHCE)”  scheme.
i. It addresses various health related issues aims to provide dedicated health care facilities to the senior citizens (>60 year of age) at various level of primary, secondary and tertiary health care.
ii. Some strategies if of the NPHCE are:
Preventive and promotive care, management of illness, health manpower development for geriatric services, medical rehabilitation & therapeutic intervention and IEC.
iii. It was launched in 100 identified districts of 21 States and Eight Regional Geriatrics Centres in selected medical colleges during the 11th plan period.
iv. As on March 2018, 520 districts in 34 states and UT’s had been sanctioned along with 19 regional geriatric centres in government medical colleges of 18 states.
v. 2 National Centres for Ageing(NCA) in AIIMS Delhi and Madras Medical College, Chennai have been sanctioned to be centres of excellence.
vi. In 2018-19, 79 more districts have been recommended, taking the number of districts sanctioned for provision of geriatric care services to 599 districts.
Columbia Pacific Communities:
CEO: Mr Mohit Nirula,
CII:
♦ Headquarters:  New Delhi.
♦ President: Mr. Rakesh Bharti Mittal. 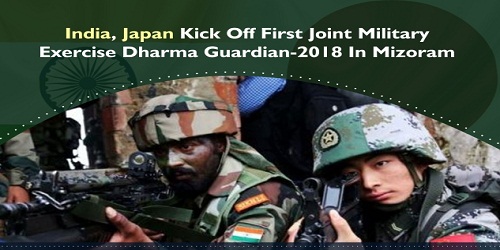 It will be a 14 days long exercise continuing till November 14, 2018.
i. The respective armies were represented by:

ii.The exercise aims to build and promote army to army relations in addition to exchanging skills.
iii.This will consist of:

Background:
i. According to a Market Pulse report by GrowthEnabler, the Indian AR/VR industry is expected to grow at a compounded annual growth rate of 76 percent by 2022.
ii. According to an estimate by Statista, the AR and VR is expected to reach a market size of $209.2 billion by 2022.
Internet and Mobile Association of India (IAMAI):
♦ Headquarters: Mumbai.
♦ President: Subho Roy.
♦ Chairman: Rajan Anandan (Google). i. It was held under the aegis of Spear Corps of Indian Army.
ii. A 19-member delegation consisting of officials of the Myanmar Army, police and bureaucratic departments attended the meeting.
iii. The Indian delegation was headed by Lieutenant General Gopal R, AVSM, SM, GOC Spear Corps and the Myanmar delegation was headed by Maj Gen Phone Myat, Commander, North West Command.
Background:
The Indo-Myanmar Regional Border Committee Meet is a bi-annual landmark event which provides, representatives of Security Forces and Civil establishment of both the India and Myanmar, a platform to discuss and resolve crucial issues relating to border management, bi-lateral cooperation and insurgency.
Myanmar:
♦ Capital: Naypyidaw.
♦ Currency: Burmese kyat.

Other Findings:
i. 75% Indians believe electric vehicles will replace conventional vehicles by 2030.
ii. 85% people feel providing electric buses will improve public transport.
About the Index:
i. The Ease of Moving Index 2018 covered 20 cities with over 43,000 people participating in the survey that measured perceptions on key aspects of urban mobility.
ii. The survey consisted of the following aspects:

SMiLE virtual tour guide to give fillip to Malabar tourism: Kerala
On October 31, 2018, to give boost to Malabar tourism, the Kerala Tourism Department launched a ‘SMiLE Virtual Tour Guide’ site for the region in north Kerala. i. SMiLE is the acronym for: ‘Small and Medium Industries Leveraging Experiential’ Tourism.
ii. It was conceived by and executed by Bekal Resorts Development Corporation (BRDC) that focuses on eco-friendly and experiential tourism.
iii. For the concept and execution, the government provided Rs 50 lakhs to BRDC.
iv. The features of the site offer:

v. The 40 Malabar destinations the VTG covers are i. The project is worth Rs. 852 crore and will be implemented through public-private-partnership (PPP).
ii. The decision was aimed to make the new generation familiar with the glorious history of INS Viraat.
iii. The carrier will be housed on a concrete foundation near Nivati Rocks in Sindhudurg in Konkan region of Maharashtra.
About INS Viraat:
The ship is the world’s oldest aircraft carrier, according to the Indian Navy, which bought it in 1986 and recommissioned it a year later. At present, Viraat is at Mumbai’s Naval dockyard after its decommissioning in 2017.
Maharashtra:
♦ Capital: Mumbai.
♦ Chief Minister: Devendra Fadnavis.
♦ Governor:  C. Vidyasagar Rao.
♦ National Parks: Tadoba Andheri Tiger Reserve, Chandoli National Park, Sanjay Gandhi National Park, Navegaon National Park.

ii. It was developed to recognize the contribution of Indian community in the development of Medan city, the 4th largest city of the country.
iii. It will be promoted as an iconic tourist spot in Medan city as it is the first such structure in entire Indonesia.
iv. It represents Bhinneka Tunggal Ika’ or Unity in Diversity of Indonesia and of the Indian belief in ‘Vasudev Kutubakam’, meaning the world is one family.
Background:
Every year, Kampung Madras becomes a meeting point for Hindu and Tamil festivals such as Thaipusam or the Tamil New Year, Pongal and Diwali.
Indonesia:
♦ Capital: Jakarta.
♦ Currency: Indonesian rupiah.
♦ Language: Indonesian, Malay. Theme of the conference was: “Improving Air Quality, Combatting Climate Change-Saving Lives”.
Objective:
To combat one of the world’s most significant causes of premature death: Air Pollution.
Key Points:
i. It was held in collaboration with: i. Previously, he served as the senior-most judge of the Hyderabad High Court. He replaces Justice KM Joseph who was promoted to the Supreme Court.
ii. Ramesh Ranganathan was administered the oath by Uttarakhand Governor Baby Rani Maurya in Raj Bhavan, Dehradun.
iii. Ramesh Ranganathan was born in Delhi on July 28, 1958. He was a Government Pleader from 1996 to 2000. He was Additional Advocate General from 2000 to 2004.

Atul Goel takes over as MD, CEO of UCO Bank
On 2nd November 2018, Atul Kumar Goel took charge as Managing Director and CEO of UCO Bank.
Key Points:
i. Earlier, Atul Kumar Goel was executive director of Union Bank of India. He has replaced R K Takkar who completed his three-year term on November 1, 2018.
ii. He started his carrier as Chartered Accountant in Allahabad Bank in 1992. He has worked in various segments like corporate credit, foreign exchange and treasury.
About UCO Bank:
♦ Tag line – Honors Your Trust
♦ Headquarters – Kolkata

G.N. Bajpai resigns as Director of Infrastructure Leasing & Financial Services (IL&FS)
GN Bajpai resigned as Director of Infrastructure Leasing & Financial Services (IL&FS), with effect from October 30, 2018.
Key Points:
i. GN Bajpai resigned from the board of IL&FS citing personal reasons. He is a former chairman of Securities and Exchange Board of India (SEBI).
ii. He was one of the 7 directors appointed on the IL&FS board by the government, following National Company Law Tribunal (NCLT) order, recently.
iii. Following his resignation, the members remaining on IL&FS board are:

World’s longest DNA sequence decoded
A team of United Kingdom scientists led by Matt Loose at Nottingham University, have created a new record for decoding the world’s longest DNA sequence.
Key Points:
i. The scientists have produced a DNA read that is nearly 10,000 times longer than normal. Also, it is two times larger than the previous record from Australia.
ii. The DNA used for the long read was that of a human. At present, DNA is cut into smaller pieces and then reassembled during the process of sequencing.
iii. This improvement will make sequencing genetic information quick and easy, as long DNA sequences can be decoded.
iv. Also, Matt Loose’s team recently produced the most complete human genome sequence using a palm-sized “nanopore” sequencing machine.
v. These methods could be used to study cancer genomes, where the DNA gets rearranged. 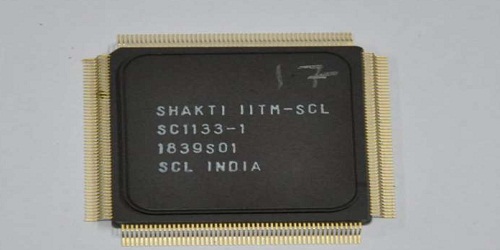 Objective:
To reduce reliance on imported microprocessors in the communication and defence sectors.
Key Points:
i. This is India’s first indigenously-developed microprocessor  and can be used in mobile computing devices, embedded low-power wireless and network systems.
ii. The Shakti processors were made at semi-conductor laboratory (SCL) of ISRO in Chandigarh.
iii. The project is funded by Union Ministry of Electronics and Information Technology.
Other News:
The team is now ready with ‘Parashakti’, an advanced microprocessor for super computers which will be ready by December 2018. 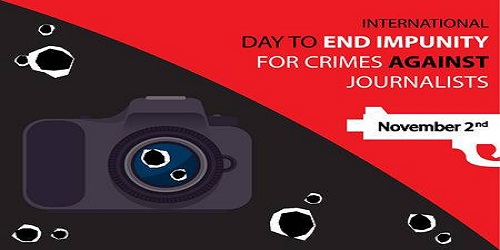 Key Points:
i. When: The United Nations General Assembly declared 2 November as the ‘International Day to End Impunity for Crimes against Journalists’.
ii. The date was chosen to commemorate the assassination of two French journalists in Mali on 2nd November 2013.
iii. Why: This day aims to promote a safe and enabling environment for journalists to do their work independently and without interference.

33rd Army Aviation Day celebrated on 1 November 2018
On 1st November 2018, Army Aviation Corps celebrated its 33rd Raising Day.
Key Points:
i. On this day, a Wreath Laying Ceremony was held at the Amar Jawan Jyoti at India Gate, New Delhi. Wreath was laid by Lieutenant General Kanwal Kumar, Colonel Commandant and Director General of Army Aviation and other officials.
ii. Army Aviation Corps is the aerial manoeuvre arm of the Indian Army. It has played a major role by providing air support to soldiers and also relief to people at times of natural calamity.
About Indian Army:
♦ Chief of the Army Staff (COAS) – General Bipin Rawat
♦ Headquarters – New Delhi

World Vegan Day – November 1
On 1st November 2018, World Vegan Day was celebrated throughout the world.
Key Points:
i. When: This day was established in 1994 by Louise Wallis, then Chair of The Vegan Society, to commemorate the 50th anniversary of founding The Vegan Society and the coining of the terms: “vegan” and “veganism”.
ii. Why: This day highlights the benefits of veganism. Veganism is the practice of not consuming any animal products like milk, curd, eggs, cheese, honey, meat etc.
iii. Also, the month of November is observed as World Vegan Month.
About The Vegan Society:
♦ Chairperson – Stephen Walsh
♦ Location – Birmingham, England