India finds problems with current methodology of STRI computed by OCED
India has found issues with the present method under which the Organisation for Economic Cooperation and Development (OECD) ranks countries based on their Services Trade Restrictiveness Index (STRI).
Issues regarding OECD:
i. A study commissioned by the Commerce Ministry stated that the OECD index has numerous problems associated with it which makes it impractical for usage, including some very important design issues.
ii. The OECD index shows the Indian services sector as 1 of the most restrictive globally, mainly in policy areas like foreign entry, (FDI) Foreign Direct Investment. When, the truth of the matter is, since 1991, FDI is the one area that has seen the maximum liberalization in India.
What has India done to correct this measure?
i. India approached the developing countries, namely, China, Brazil, Indonesia, Turkey, South Africa, and Malaysia during the recently-concluded (WTO) World Trade Organization Ministerial talks in New Delhi to build consensus around the adoption of a new method for measuring trade restrictiveness in the services sector.
ii. A team of econometricians from Indian Institute of Foreign Trade (IIFT) has designed a brand new way of measuring restrictiveness in the services trade which would be more robust and remain unbiased  both for the developed as well as the developing countries.
About Services Trade Restrictiveness Index (STRI):
♦ Launched in: 2014
♦ STRI is computed by: OECD
♦ STRI’s aim: To rank nations based on their service trade policies
♦ STRI is presently available for year 2018. It includes 45 economies (with 36 OECD and the rest non-OECD) and 22 sectors. These nations and sectors undertaken represents over 80% of global trade in services.
About Organization for Economic Co-operation and Development (OECD):
♦ Established: 1961
♦ Headquarters: Paris, France
♦ Membership: 36 countries
♦ Secretary-General: Angel Gurria 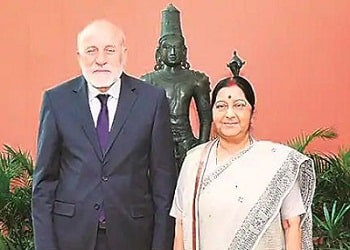 Key points:
i. “Loya jirga” peace summit in Kabul was held in May 2019 which had around 3,200 religious and tribal leaders, politicians and representatives.
ii. The ‘loya jirga’ had delegates from across Afghanistan who demanded an immediate and permanent ceasefire, and President Ashraf Ghani was conditionally prepared to implement the demand.
iii. Daudzai, special envoy of President Ashraf Ghani and National Security Advisor, Ajit Doval also met Foreign Secretary Vijay Gokhale.
iv. National Security Advisor (NSA) Ajit Doval notified that the conflict in Afghanistan should be resolved through direct talks, led and owned by the Afghanistan government.
v. India has expressed its full support for sustainable peace, economic development, and stability in Afghanistan.
About  Afghanistan
♦ Capital: Kabul
♦ Currency: Afghani

India’s fastest train ‘Vande Bharat Express’ completed 1 Lakh kilometers without missing single trip
India’s fastest train ‘Vande Bharat Express’ completed 1 Lakh kilometers without missing a single trip. It was flagged off by the Prime Minister Narendra Modi under ‘Make In India’ Initiative, on February 15, 2019, from New Delhi to Varanasi. This 16 coach train began its commercial run from February 17, 2019.
Key Points:
i. The indigenously-built high-speed train was manufactured by the Integral Coach Factory in Chennai.
ii. This high-speed train is expected to replace Shatabdi Express trains soon.
iii. The train has facilities like high-speed onboard WiFi, GPS-based passenger information system, touch-free bio-vacuum toilets, LED lighting, mobile charging points, and a climate control system which automatically adjusts to the temperature.
About ‘Make In India’ Initiative:
‘Make in India’ is a flagship program formally launched by PM Narenda Modi on 25th September 2014. The campaign was dedicated to Pandit Deen Dayal Upadhyaya who was born on the same the date in 1916. The logo of ‘Make In India’ consists of lion and Ashoka Chakra. 25 sectors are included under Make in India campaign. 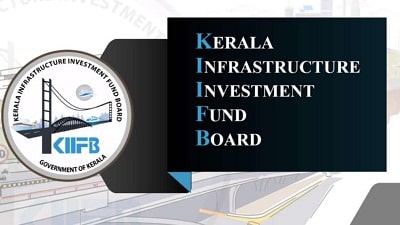 Crop insurance under PMFBY failed
The flagship program of Prime Minister Modi, Pradhan Mantri Fasal Bima Yojana (PMFBY) which provides crop insurance to farmers has failed. Recently, a senior official from Agriculture Ministry disclosed that out of Rs 1,400 crore designated fund for the North-Eastern state annually under PMFBY, only around 0.57% or Rs 8 crore was spent in 2018-19.
Key Highlights
i. Four North-eastern states are not covered under PMFBY and the states are Arunachal Pradesh, Nagaland, Manipur and Mizoram.
ii. Other large states like Bihar and West Bengal had earlier withdrawn from crop insurance scheme and launched their own state-level scheme and states like Punjab had never joined the scheme.
About Pradhan Mantri Fasal Bima Yojana (PMFBY)
♦ The scheme was launched on 14th January 2016. The objective of this scheme is to provide financial support to farmers suffering from crop loss or damage due to an unforeseen event.
♦ Under this scheme, the government provide crop insurance to the farmers and farmers have to pay a premium of 1.5%, 2% and 5% for rabi, Kharif and horticulture crops respectively.

US President Donald Trump rolled out new ‘Merit-Based Immigration System’
US President Donald Trump in an announcement in Rose Garden speech, unveiled a new ‘Merit-Based Immigration System’. This is a point based system for professionals where skills of the people will be preferred for permanent residency against the current country based quotas which requires family ties for green cards. It will replace the existing green cards with ‘Build America’ visa. 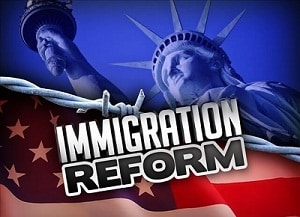 Key Points:
i. Under the new plan, 57% of the proportion of green cards or lawful permanent residence status will be given to people with skill-based visas as against the present rate at 12%. In addition to this, immigrants are required learn English and pass a civics exam prior to admission.
ii. Indian H-1B visa holders residing in US will be the biggest beneficiaries of this new point based system as it takes at least 9.5 years on average to get a green card.
iii. This point-based system is similar to the system followed in Canada, Australia and New Zealand.
About USA:
♦ Capital: Washington DC
♦ Currency: United States Dollar 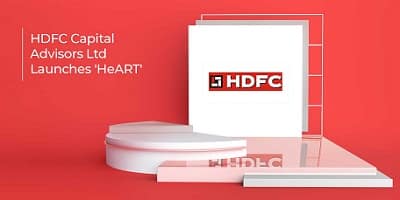 Key points:
i. Due to the upcoming technology disruptions, all processes like land approvals, planning and design, construction, project management, sales and facilities management would undergo drastic change.
ii. HDFC Capital will also be collaborating with leading academic institutions, industry platforms and accelerators which would aid in creating an ecosystem that supports various components in the development affordable housing.
iii. HDFC Capital Advisors offers investment management services for real estate private equity financing and has invested more than 1$ billion in the last 24 months with marquee developers across India in affordable housing system and mid income housing system.

BSNL partnered with Google for expanding WiFi footprint
Bharat Sanchar Nigam Limited (BSNL) has partnered with Google on the occasion of World Telecom Day (May 17). The objective is to expand BSNL’s Wi-Fi footprint in the country. Currently, there are around 38,000 BSNL Wi-Fi hotspot locations working across the country and one can use these after buying the Wi-Fi vouchers worth of Rs 19 and more.
Additional Information
i. Recently, state-run telecom major BSNL has also taken several steps to increase the rural Wi-Fi footprints which are the part of government’s “Digital India” initiative.
About Bharat Sanchar Nigam Limited (BSNL)
♦ Headquarter: New Delhi
♦ CEO: Anupam Shrivastava
About Google
♦ Headquarter: California, US
♦ CEO: Sundar Pichai 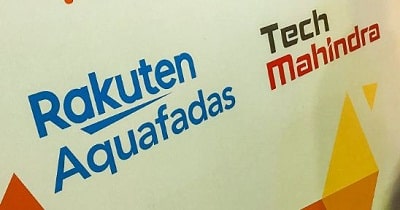 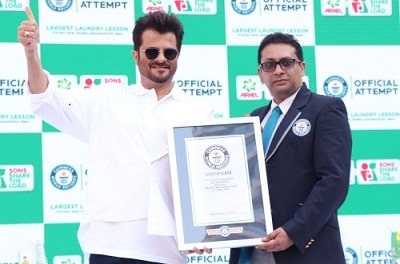 NSG Commandos summit Mount Everest in first attempt
A counter terror force National Security Guards (NSG) commandos have created the history by scaling the Mount Everest in the first attempt. Lt. Col J P Kumar led 7-memeber team of the NSG and successfully unfurled the Indian flag at the Mount Everest which is 8,848 metre tall. The 7 member team has adopted the south-eastern approach via south Col in Solukhumbu region of Nepal. 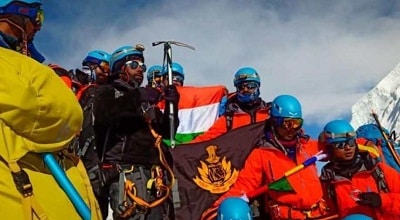 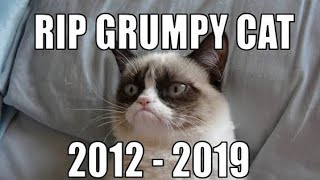 i. Grumpy Cat had feline dwarfism. It had become a viral internet sensation in September 2012 on Reddit in a post titled “Meet Grumpy Cat” uploaded by Tabatha’s brother Bryan.
ii. At the time of death, it had 2.4 million followers on Instagram, 1.5m followers on Twitter and 8.5m likes on Facebook.
iii. Grumpy cat had contracted with meme agent Ben Lashes who managed other viral stars like Keyboard Cat, Scumbag Steve and Nyan Cat. It was also the star of its own movie “Grumpy Cat’s Worst Christmas Ever”.
iv. It was the official “Spokescat” for Friskies and appeared on several US TV shows including Today and Good Morning America. It’s first book titled “Grumpy Cat: A Grumpy Book”, was published in the year 2013. It also had own waxwork made at Madame Tussauds in San Francisco which was unveiled in 2015. International Day of Vesak 2019 was observed on 18th May 2019
The UN General Assembly, by its resolution 54/115 of 1999 has internationally recognized the Day of Vesak also known as Buddha Purnima, Buddha Day or Buddha Jayanti. This day commemorates the birth anniversary of Gautama Buddha (or Lord Buddha). This year it day coincides with May 18, which witnessed the 2,563rd birth anniversary of the Lord Buddha. Buddha Purnima also acknowledges the contribution made by Buddhism for humanity.
Key Points:
i. It is celebrated worldwide on the day of May (Vaishakha) that has the full Moon (known as Purnima).
ii. It was on the Day of Vesak, around 2.5 millennia ago, in 623 B.C., Buddha was born at Lumbini Grove. It was also on the Day of Vesak that the Buddha attained enlightenment under a Bodhi Tree (Peepal tree), and it was also on the Day of Vesak that the Buddha in his 80th year passed away. Thus, the Day of Vesak marks the 3 major events of Buddha’s life.
iii. The International Buddhist Conference, held in Sri Lanka in November 1998 had notified that the Day of Vesak would be commemorated by the UN every year.
iv. This day is mainly observed by Buddhists and some Hindus in Asian nations including India, Sri Lanka, Nepal, Tibet, Bangladesh, and Bhutan.
About UN (United Nations)

The Meghalaya government approved Farmers’ Commission which would seek to look into the issues faced by farmers
The Cabinet of Meghalaya has given its consent for setting up of Farmers’ Commission, which was proposed by the Agriculture Department following the resolution passed at the “farmers’ parliament”, for looking into the issues faced by farmers.
Key points:
i. The first of it’s in India, ‘farmers’ parliament’ was organised in December 2018 and it was attended by scientists, bureaucrats, and farmers to discuss problems related to the agriculture situation in Meghalaya.
ii. The government is planning to observe 2020 as a year for farmers.
Meghalaya:
♦ Capital: Shillong
♦ Chief Minister: Conrad K Sangma
♦ Governor: Tathagata Roy
♦ Districts: 11

Harda district of Madhya Pradesh becomes the first where women handle entire work of counting votes
In Harda district of Madhya Pradesh, women will handle the entire work of counting votes. This first of its kind initiative was taken for the empowerment of women.
Key Points:
i. Harda district is a part of Betul parliamentary seat and the counting of votes of Timarni and Harda assembly segments will take place at Harda district headquarter.
ii. Presently, 84 women are being trained for counting in at Polytechnic College.
iii. Besides counting of votes, only the women will be deployed for the security of the counting centre.
Madhya Pradesh :
♦ Known as: ‘Heart of India’ (due to its geographical location)
♦ MP has: the largest reserves of diamond and copper in India
♦ Chief minister: Kamal Nath
♦ Capital: Bhopal
♦ Governor: Anandiben Patel
♦ Districts: 52