We are here for you to provide the important Current Affairs December 19 2018, which have unique updates of all daily events from all newspapers such as The Hindu, The Economic Times, PIB, Times of India, PTI, Indian Express, Business Standard and all Government official websites. 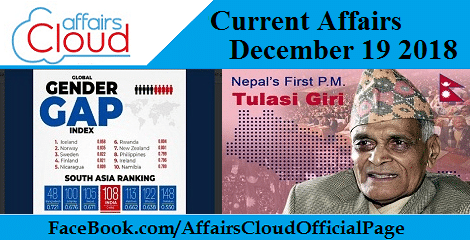 Committee Chaired by S K Dash formed ahead of Government orders cadre review, restructuring of I-T department
On 17th December 2018, The Central Board of Direct Taxes (CBDT) ordered creation of a 12 member committee of senior officials chaired by S K Dash for a fresh cadre review and restructuring of the Income Tax Department.
Key Points
i. The decision was taken by the government with a aim to create a “caring but strict” direct taxes regime in the country.
ii. The Committee has to accomplish the task within the next three months and it has to submit its report to the government by 28th February 2019.
iii. A specific four points charter to be followed has been given to the new committee formed to undertake cadre review and restructuring of the income tax department.
Income Tax Department
♦ Responsible Minister: Arun Jaitley, Finance Minister
♦ Parent Department: Department of Revenues
♦ Chairman of CBDT: Sushil Chandra

India, Nepal, Bhutan plan joint task force to protect wildlife
On 13th December 2018,Reconciling human-wildlife interface in Kangchenjunga Landscape: A Regional Dialogue for Action Workshop concluded in North Bengal,India.While Attending the Workshop the governments of India, Nepal and Bhutan are planned to form a joint task force that would allow free movement of wildlife across political boundaries and check smuggling of wildlife across the Kanchenjunga Landscape, a trans-boundary region spread across Nepal, India and Bhutan.The Workshop was Inaugurated on 4th December,2018.
Key Points:
i. Earlier this month, the forest officials and representatives of non-government organisation of the three countries mulled up the proposal after visiting parts of the landscape and later held a meeting at Siliguri in north Bengal.
ii. The landscape which covers an area of 25,080 sq km including parts of eastern Nepal (21%), Sikkim and West Bengal (56%) and western and south-western parts of Bhutan (23%) lies to the south of Mount Kanchenjunga.
iii. The move was necessary because according to International Centre for Integrated Mountain Development (ICIMOD)– 1,118 sq km of riverine grassland and tree cover were lost in the landscape between 2000 and 2010 and 74 % of the area was converted into rangeland and 26% to agricultural land.
iv. ICIMOD also reported that between 1986 and 2015, as many as 425 people were killed by elephants and 144 elephants were killed between 1958 and 2013.
v. Besides every few months there are cases of elephants, rhino and gaurs and other mammals crossing over political boundaries, triggering panic among locals across the border and also posing danger to the wildlife.
About Nepal:
♦ Currency: Nepalese rupee
♦ Capital: Kathmandu
♦ Prime Minister: Khadga Prasad Oli
About Bhutan:
♦ Currencies:Bhutanese ngultrum
♦ Capital: Thimphu
♦ Prime Minister: Lotay Tshering

Assam govt. approves Rs 600 cr farm loan waiver for farmers
On Dec 18,2018  Assam Government spokesperson and Parliamentary Affairs Minister Chandra Mohan Patowary announced that government has approved to waive off 25 per cent of loan of farmers of maximum upto Rs.25000 under Assam Farmers’ Credit Subsidy Scheme (AFCSS).
i. The state government approved the cost of Rs.600 crore to help around eight lakh farmers loan of the state.
ii. The state government will provide up to Rs 10,000 subsidy on loans taken from Kisan Credit Card (KCC).The Government has also approved an interest relief scheme for farmers to take loans at zero interest from next financial years.
iii.The cabinet decided to enhance the state Freedom Fighters’ pension from Rs. 20,000 to Rs. 21,000 and also approved the formation of a Micro and Small Enterprises Facilitation Council to help the growth of MSME sector in the state.
iv.The government also sanctioned Rs. 32.72 crore loan from National Cooperative Development Corporation for revival of a jute mill at Nagaon.
v.Another 2 Schemes are announced by the Assam government,they are Assam Farmers’ Interest Relief Scheme (AFIRS) and Assam Farmers’ Incentive Scheme (AFIS).
vi.UnderAFIRS,three per cent of the seven per cent interest against farm loan is paid by the Central government and the remaining four per cent is required to be paid by farmers.
vi.Under AFIS,government is focusing on bringing back the defaulting farmers into the banking system.The State Government had announced this Scheme on125th anniversary of the Battle of Patharughat 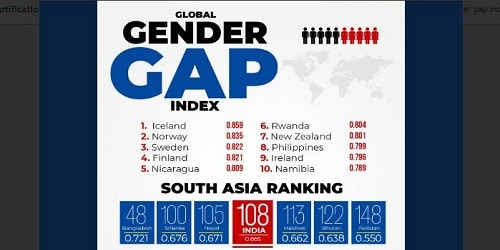 WEF’s Global Gender Gap Report 2018:-
The Global Gender Gap Index 2018 ranks 149 countries on health, education, economic and political indicators, including wage equality, educational attainment and representation in national government.
India Pros and Cons at this report:-
i. India has slightly improved in WEF’s wage equality for similar work indicator, where it stood at 72nd place.
ii. India continues to rank third-lowest in the world on health and survival, remaining the world’s least-improved country on this subindex over the past decade.
List of Top Ten Countries for Global Gender Gap Index 2018 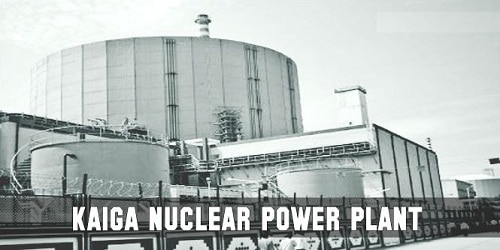 In 2016, Sonam Kapoor was named PETA India’s Vegetarian Celebrity, and she earned a Compassionate Business Award from the group a year later for her cruelty-free handbag line.
i. She donates “Kind Kites” to children to help prevent injuries from manja.
ii. Her past works include urging the Minister of Environment, Forests and Climate Change not to revoke the ban on classroom dissection for university life science and zoology students calling for a Maharashtra-wide ban on glass-coated manja that can entangle and kill birds.
iii. Past winners of PETA India’s Person of the Year Award include Anushka Sharma, Sunny Leone, Shashi Tharoor, Kapil Sharma, Hema Malini, R. Madhavan and Jacqueline Fernandez.

Madhavi Divan appointed Additional Solicitor General
On 18th December 2018, the central government has appointed advocate Madhavi Goradia Divan as additional solicitor general (ASG) in the Supreme Court.She is the third woman to be appointed as ASG in the apex court.
Key points
i. Senior lawyer Indira Jaising was the first woman ASG. Pinky Anand, the second woman lawyer to hold the post, is still in office
ii. Divan will represent the government in the Supreme Court and will hold office till 30 June, 2020
iii. Divan began her legal practice from the Bombay High Court and has represented two state governments in judicial proceedings in the past – those of Madhya Pradesh and Gujarat.
iv. Earlier, PS Narasimha and Maninder Singh had resigned as ASG.

India’s IDRSS to be satellite communication hub in sky
On 16th December 2018,India  launched the Indian Data Relay Satellite System (IDRSS) to improve data relay and communication links with its remote sensing earth observation satellites.
i. The two-satellite IDRSS will maintain continuous communication link with India’s remote sensing earth observation satellites. The first one is expected to be launched in 2019,
ii. The Geosynchronous Satellite Launch Vehicle Mark III (GSLV Mk III)  would carry three Indian astronauts to the space in 2022.
iii. India has the largest remote sensing satellite system orbiting in the space

‘Farout’ is the most-distant solar system object ever discovered
On December 17 2018, the most-distant object ever observed in our solar system known as 2018 VG18 and nicknamed “Farout,” has been discovered by scientists Sheppard from Carnegie Institution for Science, David Tholen from University of Hawaii, and Chad Trujillo from Northern Arizona University in the US.
i. It is the first to be observed at a distance of more than 100 AU (astronomical units ) which almost 120AU or 11 billion miles from the sun.“1 AU is the distance between the Earth and the Sun”.They had discovered another extremely distant object known as “The Goblin”.It’s about 80 AU from the sun.
ii. The second most distant observed solar system object is Eris about 96 AU from the sun. Pluto,a dwarf planet is currently at about 34 AU. With the total global population of the Great Indian Bustard reaching and all time low at fewer than 150, this campaign is must needed to save the bird from extinction.
Key points
i. Rajasthan is the last stronghold of the Great Indian Bustard. Fewer than 150 birds survive, out of which about 100 live in the Thar Desert. Gujarat has the next largest population of the bird – between 10 and 25 individuals.
ii. The wildlife organizations have launched the campaign are The Corbett Foundation in collaboration with Conservation India and Sanctuary Nature Foundation.
iii. Many experts believe that these birds might be the first species to become extinct in Independent India. This grassland species is extinct from 95% of its range now.
iv. Rajasthan has additionally allocated Rs.12.9 crore for the project, of which Rs.4.55 crore will be deployed this fiscal year.
About Rajasthan
♦ Capital: Jaipur
♦ Chief Minister: Ashok Gehlot
♦ Deputy CM: Sachin Pilot
♦ Governor: Kalyan Singh
♦ National Park: Sariska National Park ,Ranthambore National Park ,Darrah National Park,Desert National Park ,Keoladeo National Park
♦ Wildlife Sanctuary: Bundh Baratha WLS,Darrah WLS,Jawahar Sagar WLS, Kailadevi WLS,Mount Abu WLS,Ramsagar WLS, Sariska WLS, Sawai Man Singh WLS, Shergarh WLS, Sitamata WLS
Thermal Power Plants: Chhabra Thermal Power Station,Suratgarh Power Station.

Tri Services Cycling & Trekking Expedition Inaugurated in Sikkim
On 17th December 2018,the Indian Armed Forces inaugurated Tri Services Cycling and Trekking Expedition in Sikkim.A Tri Services Adventure Expedition to be conducted from December 17, 2018 to January 05, 2019.
i. The expedition was undertaken by a Tri Services team comprising of three Officers, three warrant rank officers and thirteen soldiers from the Army, Navy and Air Force.
ii. The expedition is in three phases which includes cycling-cum-trekking, para gliding and sea diving.
iii. The first leg of the expedition comprising of a cycling-cum-trekking expedition will cover a distance of 200 kilometres from Kalimpong to north Sikkim under the aegis of the Striking Lion Division
iv. During course of the expedition, the team will spread the message of ‘Green Sikkim, Clean Sikkim’.

Yoga exponent Geeta Iyengar, daughter of B.K.S. Iyengar, passes away
On December 16 2018 Dr. Geeta S. Iyengar 74 , the eldest daughter of legendary Yoga guru, B.K.S. Iyengar, passed away  in Pune. Ms. Iyengar,is one of the director of the Ramamani Iyengar Memorial Yoga Institute (RIMYI).
i.She has written a book ‘Yoga: A gem for women’ became the primer for women across the world and was translated in half-a-dozen European languages. 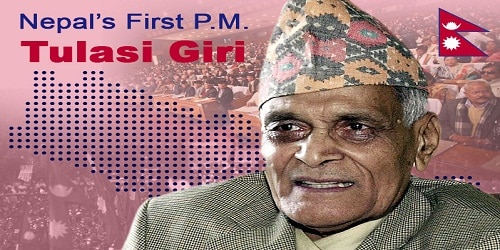 i. Dr. Giri was suffering from liver cancer for a long time and he was recently discharged from the hospital.
ii. Dr. Giri had a long political career. He served as the prime minister of Nepal Twice,first from 1962 to 1964 and again from 1975 to 1977.
About Nepal:
♦ Capital: Kathmandu
♦ Currency: Nepalese rupee
♦ Prime Minister: Khadga Prasad Oli
♦ President: Bidhya Devi Bhandari. 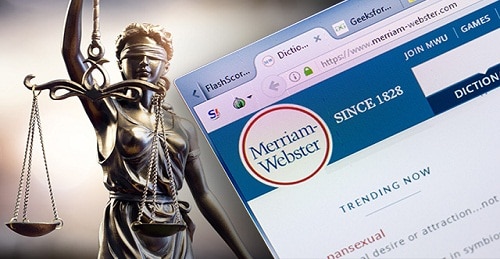 Already the word follows “toxic,” picked by Oxford Dictionaries, and “misinformation,” plucked by Dictonary.com as their 2018 word of the year. 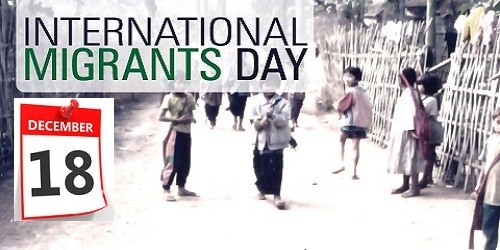 Background
On 4 December 2000, accordance with Resolution 55/93 of the United Nations General Assembly, taking into account the large and increasing number of migrants in the world, proclaimed 18 December International Migrants Day . On that day, in 1990, the Assembly adopted the International Convention on the Protection of the Rights of All Migrant Workers and Members of their families.