We are here for you to provide the important Current Affairs December 13 2018, which have unique updates of all daily events from all newspapers such as The Hindu, The Economic Times, PIB, Times of India, PTI, Indian Express, Business Standard and all Government official websites. First ever Agriculture Export Policy 2018 launched by Commerce Ministry
On December 11, 2018, the Ministry of Commerce and Industry released the Year End review of the policies to envision the creation of a ‘Vision of New India’ which would propel the India to become a USD 5 trillion economy before 2025. 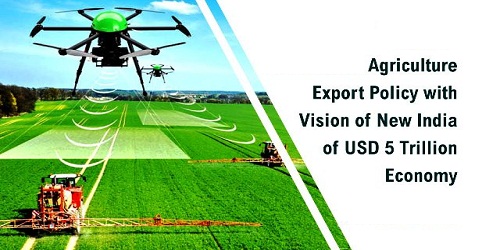 Key Points:
i. Out of the USD 5 trillion, the focused plans will be on boosting

iv. The Operational recommendations include:

MAHE awarded and inaugurated with country’s first Jean Monnet Centre of Excellence by EU
On December 8, 2018, the Ambassador of the European Union to India, H.E. Mr. Tomasz Kozlowski inaugurated India’s first Jean Monnet Centre of Excellence at the Department of European Studies (DES) at the Manipal Academy of Higher Education (MAHE), Manipal.
i. On the commemoration of EU day, in Manipal, he awarded the first Jean Monnet Centre of Excellence to Manipal Academy of Higher Education (MAHE).
ii. The award comes with a grant of € 1,00,000 to pursue EU-India interdisciplinary studies in culture, literature, education and society.
iii. In 2018, Manipal Academy of Higher Education has been chosen to develop a Centre of Excellence in European Studies, the first of its kind in India.
iv. It will focus on India-EU Interdisciplinary Studies: Culture, Literature, Education and Society.
v.This is the fifth time that MAHE has been awarded grants under the Erasmus+ Jean Monnet initiative. Previous grants have been used for a chair, modules and a project.
Other News:
In 2018, Chitkara University joined the club of Jean Monnet recipients in India with a module on ‘Decoding the European Union’.

Key Points:
i. Introducing a new term AYUSHCHARYA and citing scientific noesis of Dinacharya, Ratricharya and Ritucharya, Director AIIA Prof Tanuja Nesari gave the inaugural address to the conference.
ii. The conference was attended by nearly 200 academicians, physicians, scientists and researchers from all over the country.
iii. The present conference was the part of celebration of 3rd National Ayurveda Day which was celebrated this year on November 5, 2018 on the occasion of the Dhanawantari Jayanti or Dhanteras with the theme “Ayurveda for Public health”.
iv. The All India Institute of Ayurveda has prepared a Ritucharya (Seasonal Regimen) calendar in which it has elaborated description of Dincharya, Ratrichrya and Ahar-Vihar in a particular weather.
v. Releasing the Dinacharya booklet and AYUSHCHARYA Calendar-2019, the Minister of State for AYUSH Shri Shripad Yesso Naik delivered the valedictory address at the Conference.
About Ministry of AYUSH:
♦ Minister: Shripad Yesso Naik (MoS independent charge)
♦ Headquarters: New Delhi 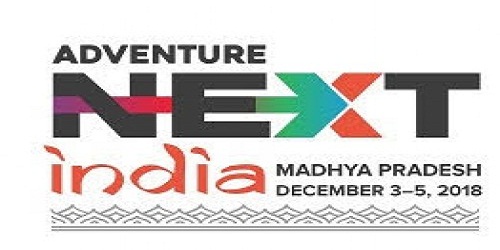 i. It was organised by:

ii. It was a first-of-its-kind in India & Asia, and the theme of the event was “Pulse of Tomorrow”.
iii. The Major partner in the event was Jharkhand Tourism.

UP to establish Umbrella University named after former PM late Atal Bihari Vajpayee
On December 12, 2018, the Uttar Pradesh Government announced creation of an umbrella university named after former Prime Minister late Atal Bihari Vajpayee.
i. The decision was taken in a cabinet meeting headed by Chief Minister Yogi Adityanath at Lucknow.
ii. The University would be the controlling authority of all the medical and dental colleges and nursing institutions in the state.
iii. This would help in bringing transparency in entrance and examination system and would enhance quality of medical education. 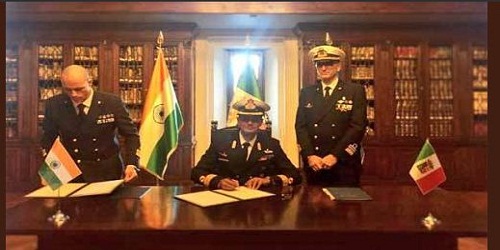 i. This agreement was signed by CMDE KM Ramakrishnan.
ii. The T-RMN consists of 30-member countries and is led by Italy.
iii. This agreement will give India an access to the information on ships passing through the Indian Ocean Region, that will help in keeping tabs on the security forces.
iv.India already has bilateral White Shipping Agreements with 36 countries.
Italy:
♦ Capital: Rome.
♦ Currency: Euro.
♦ Chief of Naval staff: Admiral Sunil Lanba.

Russia emerges as world’s No. 2 arms producer: Report by Stockholm International Peace Research Institute
On 10th December 2018, a Swedish think, the Stockholm International Peace Research Institute (SIPRI) released its report on the world’s 100 biggest armaments groups and said that Russia has emerged as the world’s second-largest arms producer after the U.S.
Key Points:
i. Russia surpassed Britain, which had held the spot since 2002 and remains Western Europe’s No. 1 arms maker.
ii. The report stated that the combined arm sales of Russian companies recorded 8.5 % year-on-year growth and amounted to$37.7 billion in 2017.Russia’s sales accounted for 9.5 percent of a worldwide total of $398.2 billion.
iii. The U.S. topped the list with 42 companies accounting for 57 % of total sales, including the world’s largest arms producer, Lockheed Martin Corp.
iv. In a first, the Moscow-based and state-owned Russian company that makes advanced air defence systems among other things, Almaz-Antey was listed among the world’s top 10 weapon companies.
v. The SIPRI’s report doesn’t include Chinese companies because of unreliable statistics.
About Russia:
♦ Capital: Moscow
♦ Currency: Russian Ruble
♦ President: Vladimir Putin 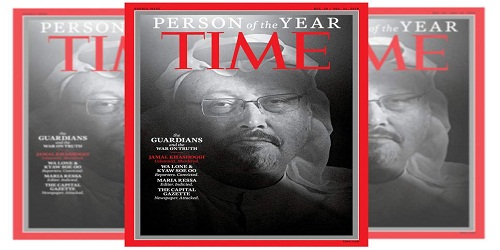 Key Points:
i.The magazine calls the series of four black-and-white covers highlighted as “the War on Truth.”
ii.The United States President Donald Trump was the runner-up for this year’s Person of the Year title while his Special counsel Robert Mueller was ranked No. 3. 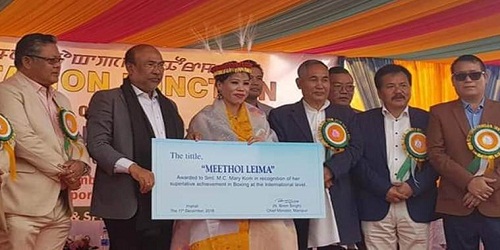 i. She was honoured by Chief minister N.Biren Singh who also handed over a cheque of Ten lakh rupees.
ii. The Chief Minister also declared that the Imphal West DC Road towards Game Village will be named as MC Mary Kom Road. 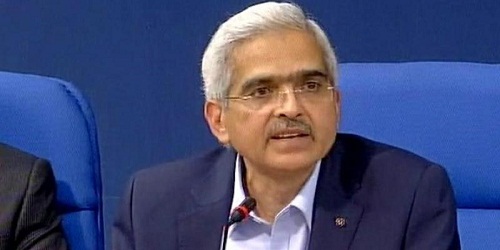 Key points
i. Das is former Economic Affairs Secretary from 2015 to 2017, worked closely with the central bank. He is currently a member of the Finance Commission of India, and the government’s representative at the Group of 20 summits.
ii. Urjit Patel resigned as the Governor of India’s central bank citing personal reasons amid tensions between the government and the RBI over issues related to governance and autonomy of the central bank.
Background
i. Appointment of Governor of the RBI by government comes under Sub section 4 of section 8 of the RBI act 1934.
ii. Osborne Smith was inaugural holder of the RBI while C.D. Deshmukh was first Indian Governor.
About Reserve Bank of India (RBI)
♦ Headquarter: Mumbai
♦ Established: 1st April 1935

CAG Rajiv Mehrishi appointed as Vice-Chair of UN Panel of Auditors till 2020
On December 11, 2018, Comptroller and Auditor General(CAG) Rajiv Mehrishi became the Vice-Chair of the UN Panel of Auditors for a term of 2 years ending on June 30, 2020.
The decision was taken in the panel’s annual meeting in New York which was held from 3rd to 4th December 2018.
i. The panel is currently chaired by the Comptroller and Auditor General of the UK and consists of External Auditors of the United Nations and its agencies.
ii. Presently, the panel consists of 11 countries — India, Germany, Chile, Canada, France, Italy, Philippines, Ghana, Indonesia, Switzerland and United Kingdom.
Other News:
i. The panel also elected the Comptroller and Auditor General of the UK as Chair of the Panel for another term (2019).
ii. The next meeting of the panel will be held in Bonn, Germany in November-December 2019.

Indian Navy’s first flyaway Deep Sea Submarine Rescue System inducted in to Indian Navy in Mumbai
On December 12, 2018, Indian Navy’s first flyaway Deep Sea Submarine Rescue System was inducted by Admiral Sunil Lanba, Chairman Chiefs of Staff Committee and Chief of the Naval Staff, at the Naval Dockyard, Mumbai.
i. The new system is a third generation, advanced Submarine Rescue System having a Non-tethered Deep Submergence Rescue Vehicle (DSRV).
ii. It is capable of undertaking rescue from a disabled Submarine upto 650 m depth.
iii .It would be operated and deployed by the crew of Indian Navy’s newly formed Submarine Rescue Unit (West) from its base in Mumbai.
iv.The DSRV, which is operated by a crew of three, can rescue 14 personnel from a disabled Submarine at one time and can operate in extreme sea conditions (upto Sea State 6).
Background:
The Indian Navy currently operates submarines of the Sindhughosh, Shishumar, Kalvari Classes as well as nuclear powered submarines.
♦Chief of Naval staff: Admiral Sunil Lanba.
♦Vice Chief of Naval Staff: Vice Admiral Ajit Kumar.

Indian Ports Association Launches ‘PCS 1x’ to Increase Ease of Doing Business
On 11th December 2018, the Port Community System ‘PCS 1x’, a cloud based new generation technology, with user-friendly interface to increase ease of doing business was launched by Indian Ports Association (IPA), under the mentorship of Ministry of Shipping in Mumbai.
i. Chairman IPA, Shri Sanjay Bhatia launched the URL  www.indianpcs.gov.in, in the presence of various stakeholders.
ii. Value added services such as notification engine, workflow, mobile application, track and trace, better user interface, better security features, improved inclusion by offering dashboard for those with no IT capability are the features offered by the PCS1x platform.
iii.This feature alone will reduce 11/2 to 2 days in a life of transaction. The application will have a cascading effect in reducing dwell time and overall cost of transaction.
iv. The web-based platform has been developed indigenously and is a part of the ‘Make in India’ and ‘Digital India’ initiative of the Hon’ble Prime Minister and is being made mandatory by Ministry of Shipping. 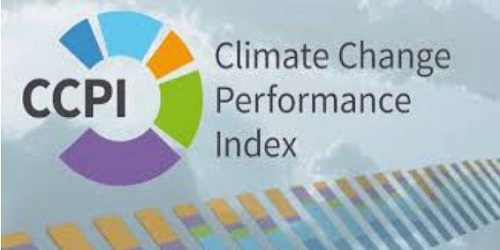 i. The index was produced by the New Climate Institute, Climate Action Network and Germanwatch.
Highlights:
i. No countries were in the top three ranks because none did well in all categories assessed.
ii. But among the league of nations, Sweden topped as the 4th country (for the second time as on 2017) followed by Morocco in the 5th position.
iii. The European Union as a whole rose from 21st to 16th place.
iv. But Germany fell from 22nd to 27th because of its reliance on lignite coal, a big source of greenhouse gas emissions.
v. The Countries Ranked at bottom are: Saudi Arabia (60), USA(59), Iran (58), Korea (57), Chinese Taipei (56),Australia (55),Canada (54),Russian Federation (52),Turkey (50),Japan (49).
vi. India ranked 11th and other neighbouring countries of India ranked the following: China (33).
Pakistan, Nepal, Bhutan, Bangladesh, Sri Lanka and Myanmar were not assessed.
About the Index:
i. The Countries were evaluated by 6 parameters:

ii. The evaluation was done on 56 countries and the European Union (EU) and the countries were categorised into 6 color-coded section. They were as per the rankings in the list:

Dracula ants declared the fastest animal on earth: Study
On December 12, 2018, in a study, published in the journal Royal Society Open Science, scientists found that the Dracula ant possesses the fastest animal movement on record.
i. With speeds of up to 90 metres per second or 200 miles per hour, the ants can snap-jaws and power up their mandibles by pressing the tips together