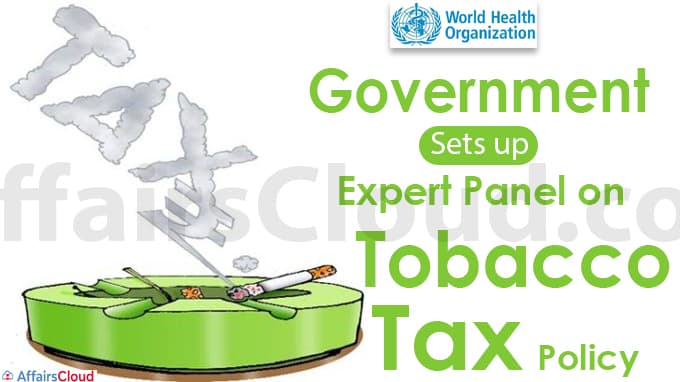 i.On October 19, 2021, the Ministry of Health and Family Welfare (MoHFW) has set up an expert group headed by Vikas Sheel, additional secretary in MoHFW to develop a comprehensive tax policy for all tobacco products.
ii.The group will analyze the current tax structure of all forms of tobacco, including smokeless tobacco, and suggesting various tax rate models for the preparation of the FY23 and future Union budgets.
iii.The reason behind this is to prepare a roadmap for reducing tobacco demand according to World Health Organization’s (WHO) plans.
About Ministry of Health and Family Welfare (MoHFW):
Union Minister– Mansukh Laxmanbhai Mandaviya (Constituency– Gujarat)
Minister of State (MoS)– Bharati Pravin Pawar (Constituency- Dindori, Maharashtra)
>>Read Full News About GFSI:
GFSI is an annual update identifying the underlying factors affecting food insecurity around the world. 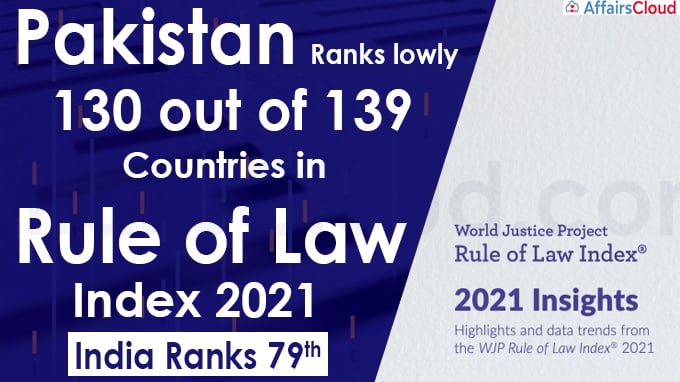 India has ranked 79 out of 139 countries and jurisdictions in the World Justice Project’s (WJP) Rule of Law Index 2021 report. 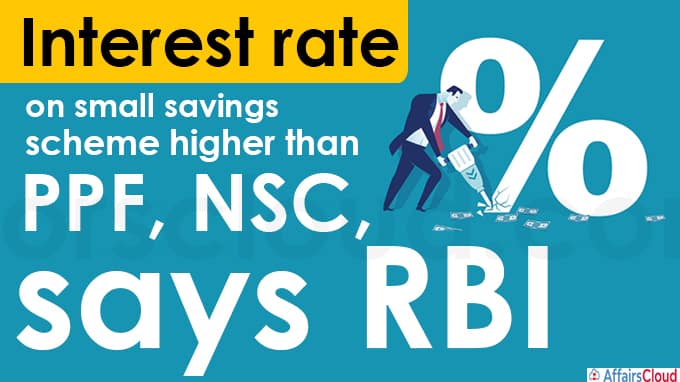 In its October 2021 Bulletin, the Reserve Bank of India (RBI) has pointed out the increasing interest burden on the government due to unchanged interest rates on various small savings instruments such as Public Provident Fund (PPF), National Savings Certificate (NSC), term deposits in post offices, etc from Q2 FY21 (around 6 quarters). Rupifi, the Digital business-to-business (B2b) payment startup for small and medium enterprises (SMEs) made a partnership with Muthoot Finance to facilitate 15 million SMEs to access instant credit over the next few years. 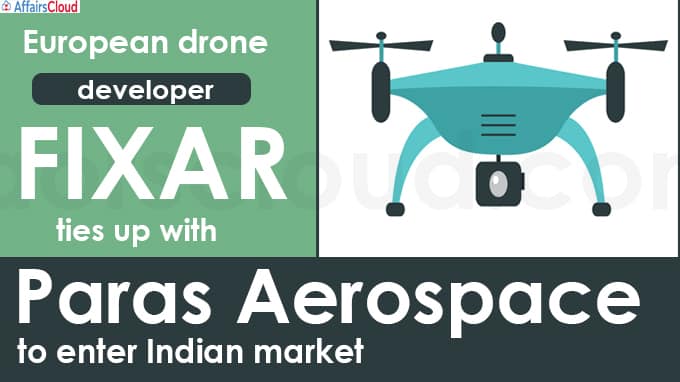 Note – India is the third-largest importer of (military grade) drones, with a 6.8 per cent share of the total UAV transfers or deliveries reported across the globe in 2020, according to Stockholm International Peace Research Institute’s (SIPRIs) Arms Transfers database
About FIXAR:
FIXAR is a leading software and design developer, powering commercial autonomous UAVs for industrial applications.
Founded in – 2018
Founded by – Aerospace engineer Vasily Lukashov
>>Read Full News Highlights:
i.The award is given for his contribution to helping the country become self-reliant in critical defence technology such as strategic and tactical missile systems.
ii.He is an institution builder and has set up mechanisms to establish robust defence development and production ecosystems.
About ASI (Astronautical Society of India): 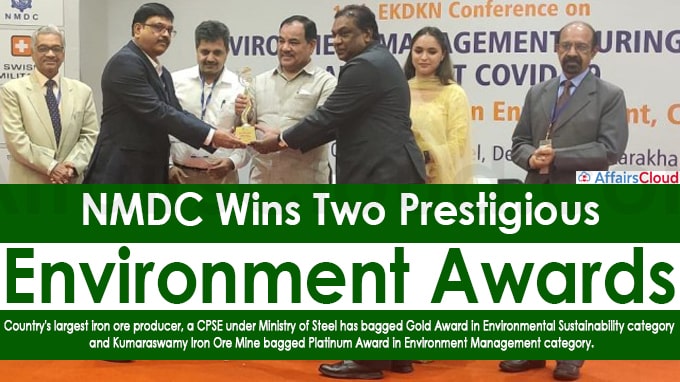 Key Points
i.This award event was organized by the Sustainable Development Foundation (a unit of EK KAAM DESH KE NAAM) at the 10th conference in Dehradun, Uttarkhand.
ii.General Gurmit Singh, Hon’ble Governor of Uttarkhand was the chief guest of the event.
iii.On behalf of NMDC, the award is given by Shri M Jayapal Lady (CGM RP) and Shri Sanjib Sahi (CGM, Donimalai Complex), the chief guest of defense, Dr. Harak Singh Rawat (Forest, Electricity, Labor, Environment).
iv.A paper on “Environmental Management in COVID-19” was also released on the occasion by Shri Lady of Uttarakhand which was appreciated by the organizers.

A.Balasubramanian Elected as the Chairman of AMFI 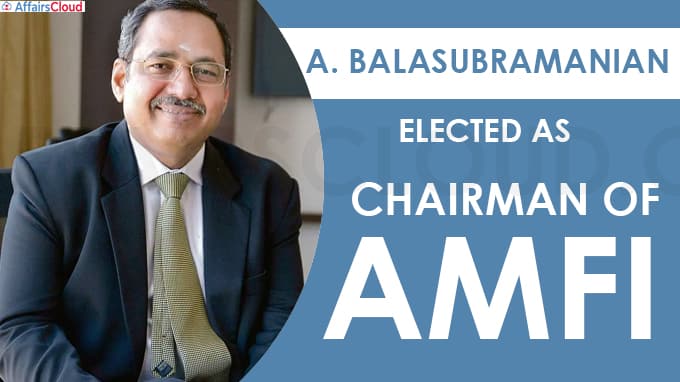 The Appointments Committee of the Cabinet (ACC) has appointed Captain Alok Mishra as the Managing Director of India Ports Global Limited(IPGL). He is currently serving as the Head of operation and transformation lead at the Gateway Terminals India Pvt Ltd (GTI), Mumbai Maharashtra.

IPGL:
i.IPGL is a company under the administrative control of the Ministry of Shipping.
ii.It is in charge of developing and managing the strategically important and India funded Shahid Beheshti Port – Chabahar located in Sistan-Baluchistan Province, Iran.
iii.IPGL was primarily formed to participate in the Chabahar Port development project.
Key Points
Alok Mishra succeeds Harjeet Kaur Joshi, CMD of Delivery Company of India Ltd(SCI), who held the additional charge as the MD of IPGL.
H K Joshi was appointed after the term of Arun Kumar Gupta, MD of IPGL ended in 2018.
About India Ports Global Ltd (IPGL):
IPGL is a wholly-owned subsidiary of Sagarmala Development Company Ltd. (SDCL).
Headquarters– Mumbai, Maharashtra 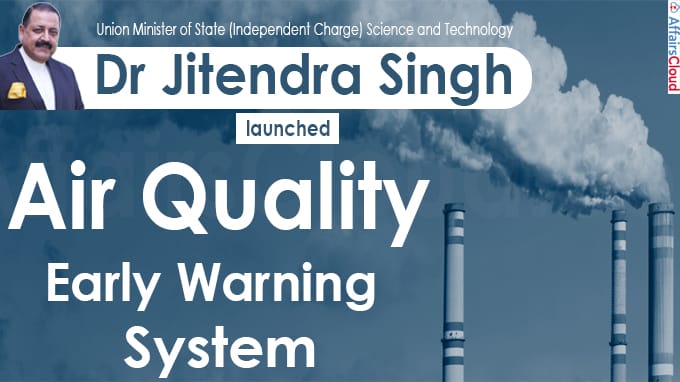 Key Points:
i.The DSS has extended the ability of the existing AQEWS to have decision-making capability for air quality management.
ii.The need for the DSS was stated by the Commission for Air Quality Management (CAQM) in NCR and Adjoining Areas.
iii.IITM, Pune also developed a website for DSS accessible at https://ews.tropmet.res.in/dss/. It will provide the following information: 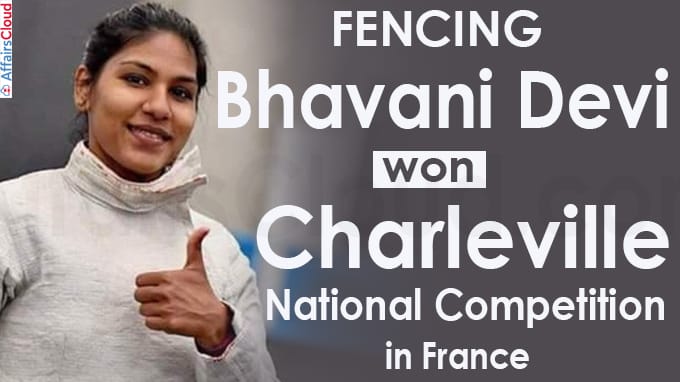 Fencing:
i.Fencing is a group of 3 related combat sports. The 3 disciplines of modern fencing are the foil, the épée, and the sabre.
ii.Fencing was included in the first Olympics, which was held in 1896 in Athens.
About International Fencing Federation(FIE):
FIE is recognized by the International Olympic Committee (IOC) as the world governing body of fencing.
President– Alisher Usmanov
Headquarters– Lausanne, Switzerland 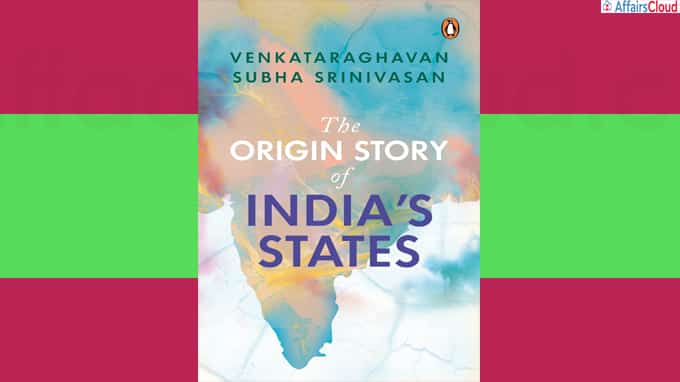 The book titled ‘The Origin Story of India’s States’ is written by Venkataraghavan Subha Srinivasan and published by Penguin Random House India (PRHI).
Venkataraghavan Subha Srinivasan is a writer, actor and strategy consultant from Bengaluru, Karnataka. This is his first non-fiction book.
About the book
i.It is a story about the birth of India’s  28 states and 8 union territories. Also their continuous  changes.
ii.It laid down political and historical impacts on the Indian states and union territories.
iii.It is based on the rigorous research work regarding the inception of Indias today’s map. 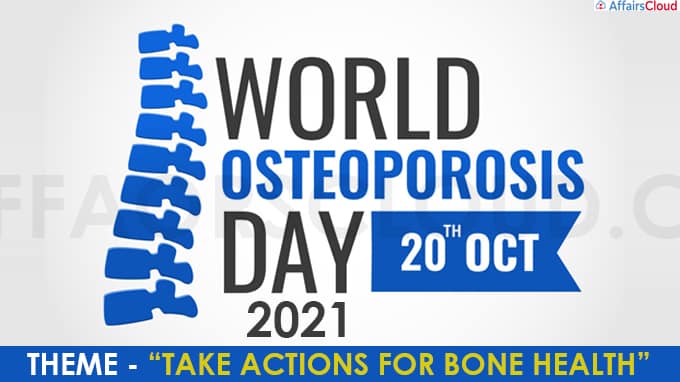 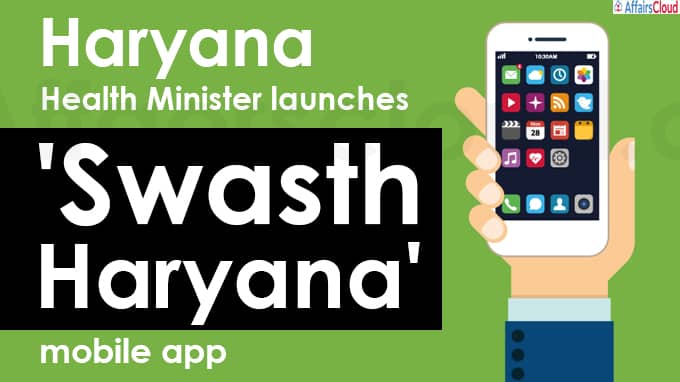 Haryana Health Minister Anil Vij launched “Swasth Haryana” mobile app to provide people relief from long queues at civil hospitals.
About Swasth Haryana
i.Patients can register themselves at any civil hospital and three medical colleges of the State for healthcare facilities through mobile App available on Google Play Store.
ii.As Government is consistently working to contain the spread of Covid-19 and to supplement the work, the Haryana State Health Systems Resource Centre (HSHRC) has developed the mobile App
iii.The App contains information on the nearest blood bank (blood bank has been integrated with e-Raktkosh along with availability of blood units).
iv.Data related to mother-child care and vaccination will also be available.
Features:
i.It helps to allow patients to register in advance along with demographic information of patients, access to their past registration records and visit to any health institute and Out Patient Department (OPD) of their choice.
ii.The mobile app is user friendly and avoids crowds which in turn consumes time and avoids exposure to infections and such other at that time. Also, patients can directly go to the specialist doctor. 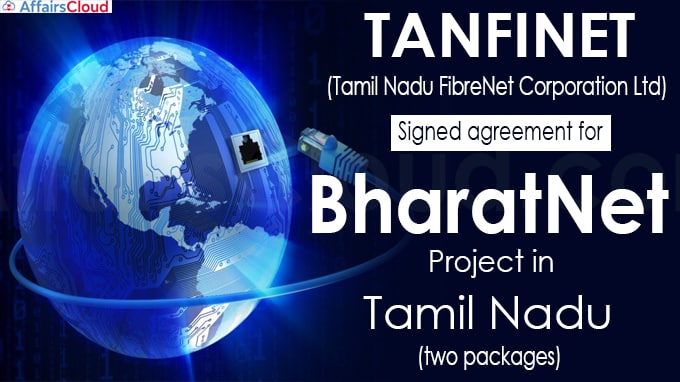 Tamil Nadu FibreNet Corporation Ltd (TANFINET) accepts the agreement for the implementation of BharatNet Project in Tamil Nadu. The project is implemented in four packages with various system integrators. 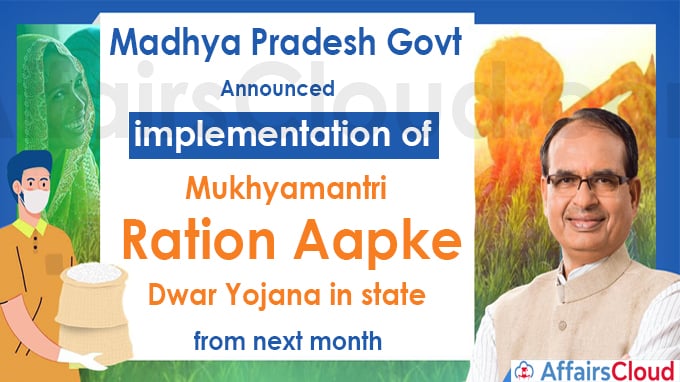 The government of Madhya Pradesh (MP) has announced the implementation of the scheme ‘‘Mukhyamantri Ration Apke Dwar Yojana”, which will start from November 2021. Under this scheme, ration will be provided at the doorstep of the villagers where there are no Fair Price Shops (FPS).

Key points
i.Subsidies will be provided to more than 20,000 crore rupees in the power sector for domestic and agricultural consumers for the financial year 2021-22.
ii.The government will provide a subsidy of INR 4981 crore under Griha Jyoti Yojana and INR 15,722 crore subsidy will be given for the agricultural sector consumers.
About the scheme
i.It will be implemented from November 2021 in the tribal development blocks (except in those blocks where model code of conduct is in force due to by-elections) will benefit tribal families in 7,511 villages.
ii.The District Collectors (DCs) will fix the days of each month for the distribution of ration supply across the state.
About Madhya Pradesh(MP)
National Park- Dinosaur Fossil National Park, Van Vihar National Park ,Panna National Park
Wildlife sanctuary-Bagdara Wildlife Sanctuary, Gandhi Sagar Sanctuary, Gangau Wildlife Sanctuary
Tiger reserve– Bandhavgarh Tiger Reserve,Kanha Tiger Reserve, Panna Tiger Reserve