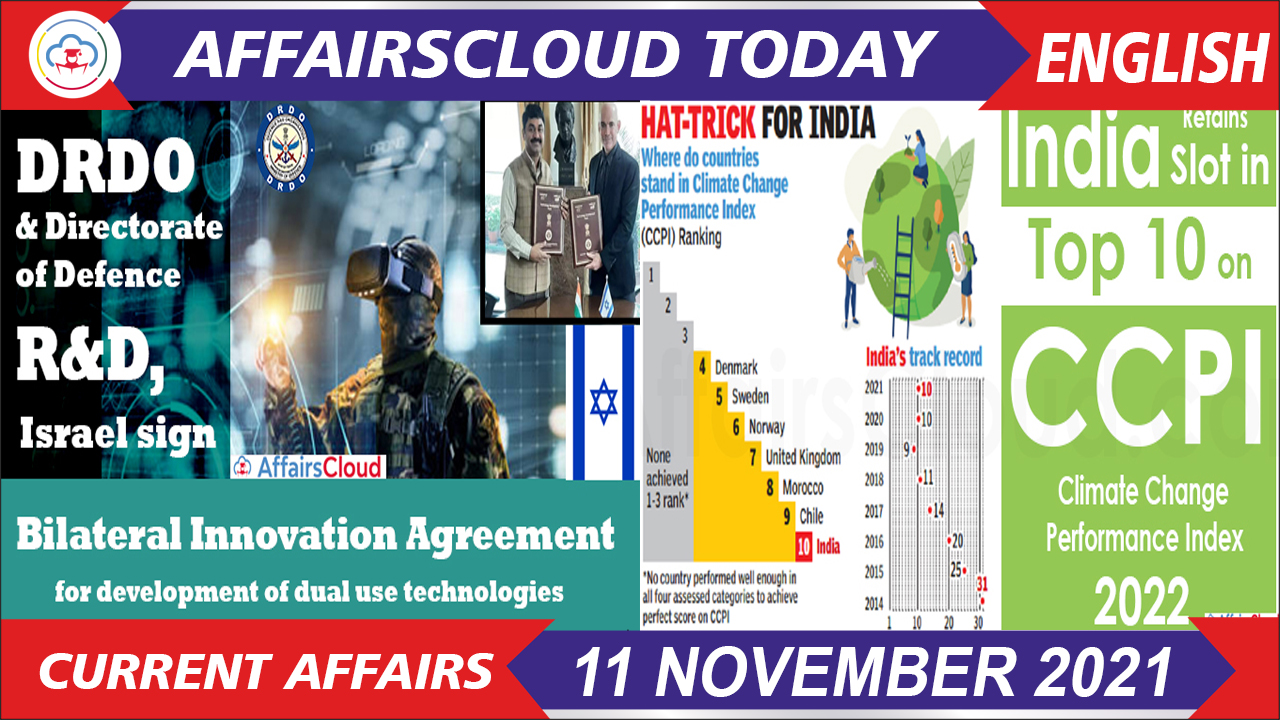 We are here for you to provide the important Recent and Latest Current Affairs 11 November 2021, which have unique updates of Latest Current Affairs 2021 events from all newspapers such as The Hindu, The Economic Times, PIB, Times of India, PTI, Indian Express, Business Standard and all Government official websites. 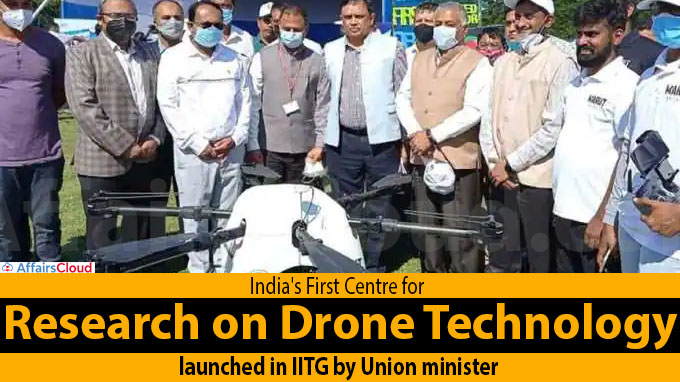 Union Minister of State Civil Aviation General, V K Singh launched India’s 1st Centre for Excellence in Research on Drone/UAV (Unmanned Aerial Vehicle) technology and Artificial Intelligence at the Indian Institute of Technology (IIT), Guwahati, Assam.
Key Points:
i.V K Singh inaugurated the Skill development Centre for Drone/UAV operation and maintenance, and Nodal Centre for overall administrative Drone Data management for the northeastern region.
ii.‘AXOM Droneports’ was also launched to support cargo drones that are delivering urgent medical and emergency supplies to remote areas of the region.
iii.He has interacted with representatives of drone companies and start-ups in the programme which was jointly organised by IIT, Guwahati and FICCI (Federation of Indian Chambers of Commerce & Industry).
iv.In August 2021, the Ministry of Civil Aviation (MoCA) notified the Drone Rules, 2021 replacing the Unmanned Aircraft Systems (UAS) rules, 2021.
v.IIT Guwahati intends to share its research expertise, impart skill development, set up a drone port and provide all administrative support to fulfil the vision of the Prime Minister i.e. to realize the potential of India to be a global drone hub by 2030.
About Indian Institute of Technology (IIT), Guwahati:
Establishment – 1994
Director – Prof. T. G. Sitharam 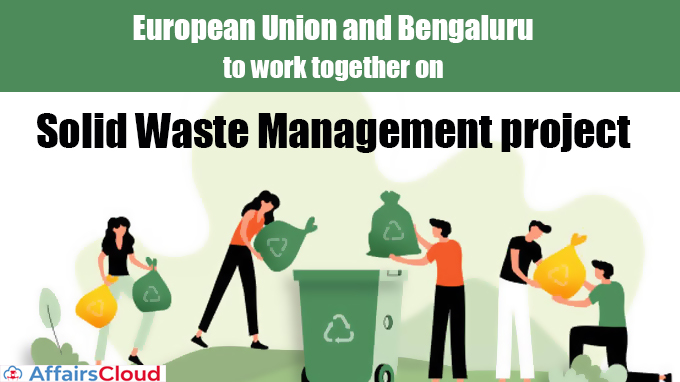 i.On the lines of circular economy principles, the BBMP (Bruhat Bengaluru Mahanagara Palike) has collaborated with the European Union (EU) for a low-carbon Municipal Solid Waste (MSW) management system in Bengaluru (Karnataka) under Nationally Appropriate Mitigation Actions (NAMA) support project ‘Waste solutions for a circular economy in India’.
ii.The project is funded by the EU and the German’s Federal Ministry of the Environment, Nature Conservation and Nuclear Safety (BMU).
iii.Under this collaboration, BBMP will get technical and financial support in setting up new plants, revamping the existing Material Recovery Facilities (MRFs), setting up compost facilities and biomethanation plants.
About European Union (EU):
It has 27 member states.
It has 24 official languages.
The United Kingdom (UK) withdrew from the European Union on 31 January 2020.
>>Read Full News 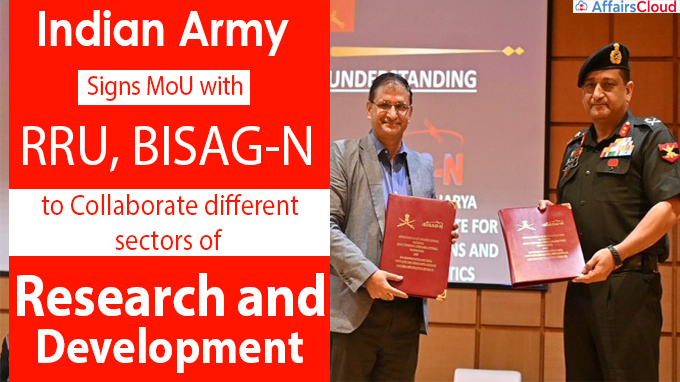 On 9th November 2021, the ArmyTraining Command (ARTRAC) of Indian Army has signed a Memorandum of Understanding (MoU) with Rashtriya Raksha University (RRU) and Bhaskaracharya National Institute for Space Applications & Geo-Informatics  (BISAG) to collaborate in different sectors of Research & Development. Union Home Ministry has nominated Bhattu Kalan police station of Fatehabad district in Haryana among the Top 3 police stations in India for 2021.
Objective – To adopt a uniform ranking for police stations in India to rank them for improving their quality of policing towards a citizen-friendly one.
The Police station was selected for its effective measures during the pandemic.
i. Union Home Minister will award the Trophy to the Bhattu Kalan police station SHO (Station House Officer) during a function in Lucknow on November 19, 2021.
Background:
The annual ranking of Police Stations across India was first proposed by Prime Minister Narendra Modi in 2015 during the Directors General of Police’s Conference in Kutch, Gujarat.
Top 3 Police Stations of 2020:
1st – Nongpok Sekmai police station in Thoubal district of Manipur
2nd – AWPS-Suramangalam police station in Salem City of Tamil Nadu
3rd – Kharsang police station in Changlang district of Arunachal Pradesh.
About Ministry of Home Affairs:
Union Minister – Amit Shah
Minister of State – Nisith Pramanik; Ajay Kumar Mishra, Nityanand Rai The Indian Navy has conducted the 3rd Goa Maritime Conclave (GMC)-2021 from 7th to 9th November 2021 under the aegis of Naval War College, Goa.
The GMC is an outreach initiative of the Indian Navy that provides a multinational forum to harness the collective expertise of maritime security practitioners and academia to generate outcome-oriented maritime thought.

The theme/subject of 3rd GMC 2021 was “Maritime Security and Emerging NonTraditional Threats: A Case for Proactive Role for Indian Ocean Region(IOR) Navies”.
The theme was developed with the goal of winning everyday peace in the maritime domain.
Participants:
i.The Chiefs of Navies or the Head of Maritime Forces from the 12 Indian Ocean littorals participated in the GMC 2021
ii.The Indian Ocean littorals include Bangladesh, Comoros, Indonesia, Madagascar, Malaysia, Maldives, Mauritius, Myanmar, Seychelles, Singapore, Sri Lanka, and Thailand.
iii.The Madagascar Navy has participated for the first time in the Goa Maritime Conclave.
iv.Adopting a common stance at the Goa Maritime Conclave, 13 nations, including India, vowed to prioritise key maritime interests in the Indian Ocean Region (IOR) with an emphasis on capacity building to tackle emerging common maritime threats. The Declaration of Common Maritime Priorities was unveiled on the final day of the Goa Maritime Conclave by chief of naval staff Admiral Karambir Singh and the naval chiefs of the eight other nations.
Highlights:
i.Conclave Address and Keynote Address of the GMC21 was delivered by the Defence Secretary and the Foreign Secretary.
ii.The conclave will benefit from the discussion among the eminent speakers and experts during 3 sessions focusing on

iii.The participants of GMC also discussed the need for interoperability in dealing successfully with emerging and future maritime security problems in the Indian Ocean Region.
Note:
As a part of the GMC 2021, the participants also visited India’s indigenous shipbuilding industry at the ‘Make in India Exhibition’ and the capabilities of the Deep Submergence Rescue Vessel (DSRV) for Submarines at the Mormugao Port Trust in Goa.

On November 09, 2021, the 11thDefence Technology and Trade Initiative (DTTI) Group meeting between India and the United States (US) was held virtually. It was the 2nd meeting of DTTI held in 2021.
The meeting was co-chaired by Secretary (Defence Production) Raj Kumar from Ministry of Defence & Under Secretary of Defence for Acquisition and Sustainment along with Gregory Kausner from US Department of Defence. 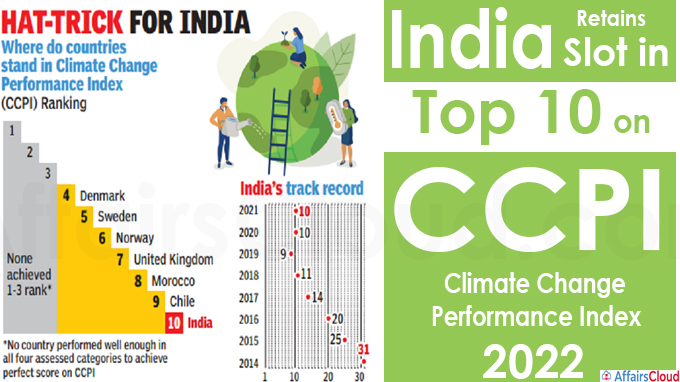 India has retained its spot in the top 10 best-performing countries (for the third year after 2020, 2021) and ranked 10th in the global Climate Change Performance Index (CCPI) 2022, which was released by Germanwatch in association with NewClimate Institute and the Climate Action Network on the sidelines of COP26 (26th Conference of Parties).
Overall Results CCPI 2022:
The first three overall positions remain empty as no country performs well enough in all index categories to achieve an overall very high rating.
CCPI 2022 – Rating Table:

India’s rank under other categories:

About Climate Change Performance Index (CCPI):
i.The CCPI is an independent monitoring tool that was Published annually since 2005 for tracking the climate protection performance of 60 countries and the European Union.
ii.The climate protection performance of those countries, which together account for 92% of global greenhouse gas (GHG) emissions, is assessed in four categories: GHG Emissions, Renewable Energy, Energy Use and Climate Policy consisting of 14 indicators.
>>Read Full News 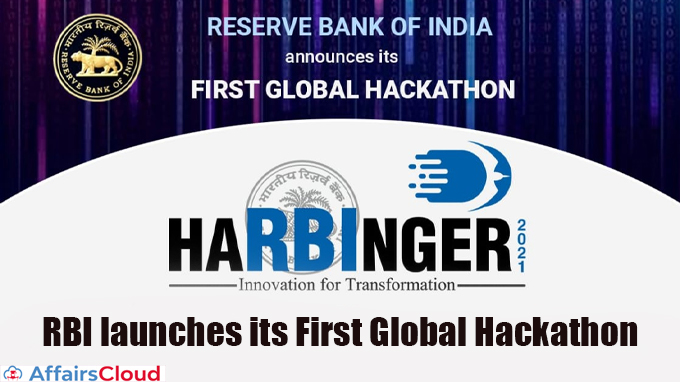 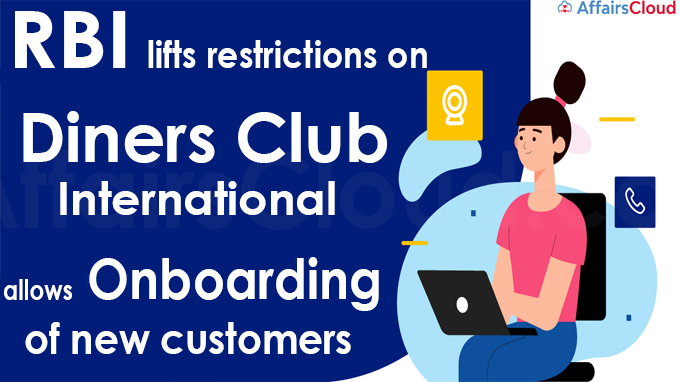 Note – Diners Club International Ltd is a payment system operator authorised to operate card networks in the country under the Payment and Settlement Systems Act, 2007 (PSS Act).
Background
In April 2018, RBI has directed all the system providers to ensure that all the information (transaction details, payment instruction, information collected and shared as part of messages) related to payment systems  collected should be stored in the system only in India. It is a localised business hub for the micro, small and medium business to find relevant information, tools, and resources curated to provide their business goals based on their growth.

Playbook:
i.Grow Your Business Playbook to inspire and equip early-stage businesses to start their journeys on Meta’s apps was also launched during the event.
ii.This playbook aims to assist the business to set up an offline to online journey and accelerating online sales for small businesses during the COVID-19 era and beyond. The Defence Ministry appointed Vice Admiral R Hari Kumar, the Chief of Western Naval Command (WNC), as India’s new Chief of Naval Staff (CNS), who will take over the position from the incumbent CNS Admiral Karambir Singh from November 30, 2021. Note– World Diabetes Day observed on 14th November, it marks the birthday of Sir Frederick Banting who co-discovered Insulin.
About Diabetes:
i.Diabetes is a Non-Communicable Disease (NCD) that occurs either when the Pancreas does not produce enough insulin (a hormone that regulates blood sugar, or glucose), or when the body cannot effectively use the insulin it produces. 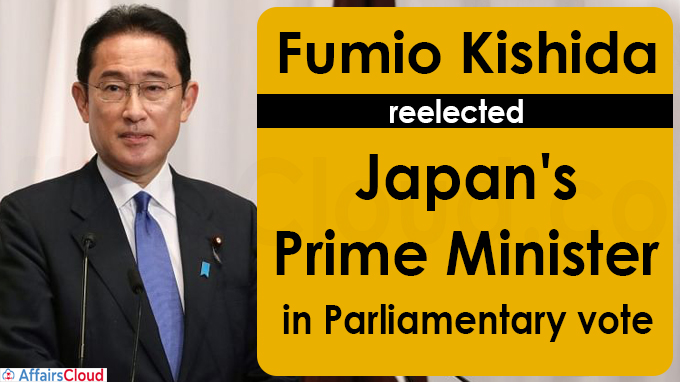 Fumio Kishida leader of the Liberal Democratic Party (LDP) has been reelected as the Prime Minister(PM) of Japan following the victory of the LDP in the 2021 Parliament election.
The LDP  has secured 261 seats in the 465 members lower house exceeding the parliamentary majority of 233 seats.

About  Fumio Kishida:
i.Fumio Kishida has previously served as the Foreign Minister of Japan from 2012 to 2017.
ii.He has been serving as the president of LDP since September 2021.
Japan’s parliament:
The National Diet, the parliament of Japan, is composed of a lower house, called the House of Representatives, and an upper house, the House of Councillors.
About Japan:
Emperor of Japan– Naruhito
Capital– Tokyo
Currency– Japanese Yen 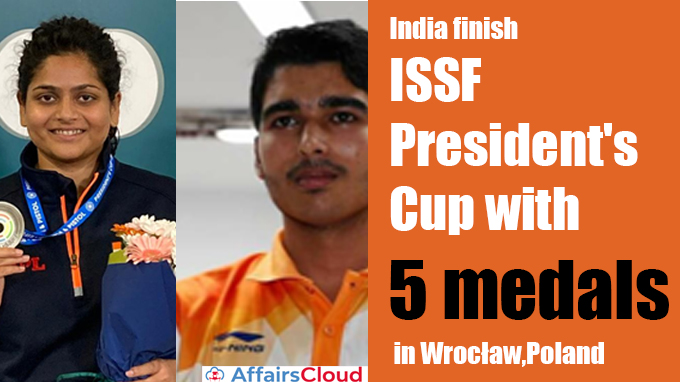 The International Olympic Committee (IOC) and the United Nations Office on Drugs and Crime (UNODC) have signed a Memorandum of Understanding (MoU) at Olympic House in Lausanne, Switzerland to strengthen the cooperation between the two organisations in fighting crime and to prevent youth crime, violence and drug use through sports. 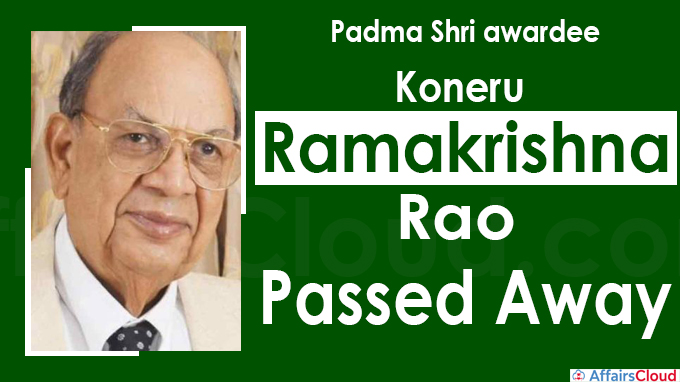 The renowned  academician and psychologist Koneru Ramakrishna Rao passed away due to age-related illness. Ramakrishna Rao was a recipient of Padma Shri Award  in the year 2011, under the ‘Literature and Education category’.

The Indian Navy and the Mukti Bahini of Bangladesh has launched the Bangla version of the book titled ‘Operation X’ about the naval commando operation. the book was authored by Capt MNR Samant and noted author and journalist Sandeep Unnithan.
The book was first conceptualised by then Chief of the Indian Navy, Admiral SM Nanda and Captain Mihir K Roy.
The book was compiled from the personal notes of Capt MNR Samant and the 1st hand accounts of Indian Naval Personnel and Muktijoddhas 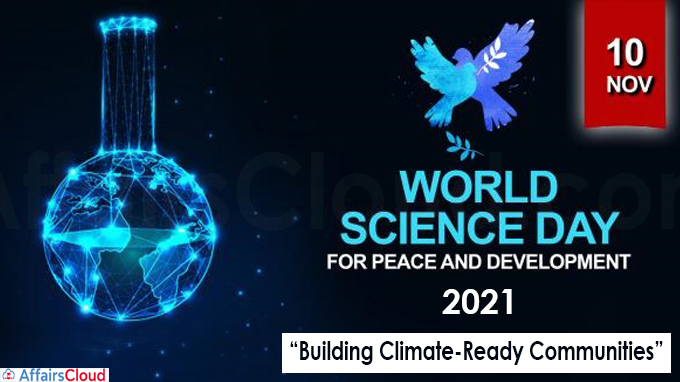 The United Nations(UN)’s World Science Day for Peace and Development is annually observed across the globe on November 10th to highlight the importance of science in society and the need to engage the public in the debates on emerging scientific issues. The Meghalaya Cabinet approved a proposal to upgrade the Mairang civil sub-division to a full-fledged district which will be called as ‘Eastern West Khasi Hills district’. It will be Meghalaya’s 12th district

Key Points:
i.The state government has given directions to the concerned department to handle the expenditure and work out all details for the new district.
ii.The creation of Eastern West Khasi Hills district will ensure efficient administration and the effective implementation of several schemes.