We are here for you to provide the important Recent and Latest Current Affairs 1 & 2 August 2021, which have unique updates of Latest Current Affairs 2021 events from all newspapers such as The Hindu, The Economic Times, PIB, Times of India, PTI, Indian Express, Business Standard and all Government official websites. 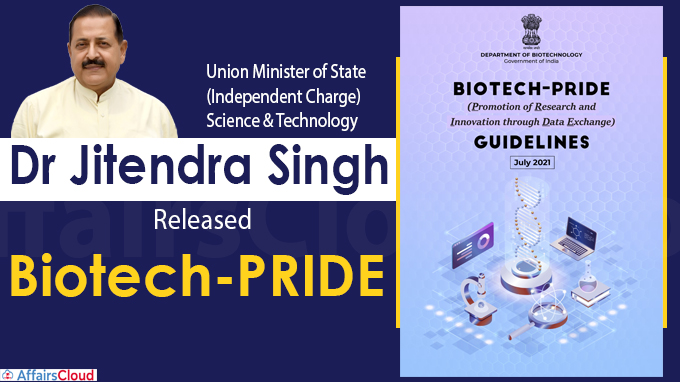 In July 2021, the Japan International Cooperation Agency (JICA) has signed a Record of Discussions with the Indian government to strengthen its technical cooperation project with the Indian Institute of Technology Hyderabad (IITH) – Phase 2 of FRIENDSHIP (Future Researchers at IITH to Enhance Network Development with Scholarship).

Collaboration between JICA and IITH:
i.JICA and IITH started their collaboration in 2007 and so far, they have worked under different projects for technical cooperation, research, public-private partnership, etc. They have also offered Official Development Assistance (ODA) Loans for campus development.
ii.FRIENDSHIP is the core project between them, it was initiated from 2nd January 2011 for a period of 8 years till 31st March 2020 to establish a sustainable platform for academic and industrial collaboration between India and Japan at IITH.
iii.So far under Phase 1 of FRIENDSHIP, IITH has signed 32 MoUs with Japanese universities and 15 MOUs between IITH and Japan industries. The project has provided scholarships for 116 beneficiaries, and exchanged 271 faculty members between Japan and IITH.
About Japan International Cooperation Agency (JICA):
Headquarters – Tokyo, Japan
President – Shinichi Kitaoka

Intel Launched ‘AI For All’ Initiative In partnership with CBSE

Intel collaborated with the Central Board of Secondary Education (CBSE) and launched the initiative ‘AI For All’ under its ‘AI For Citizens’ programme to create a basic understanding of artificial intelligence (AI) for Indian people. It plans to introduce AI to 1 million people in its 1st year of launch.

36th Edition of CORPAT held between Indian and Indonesian Navies 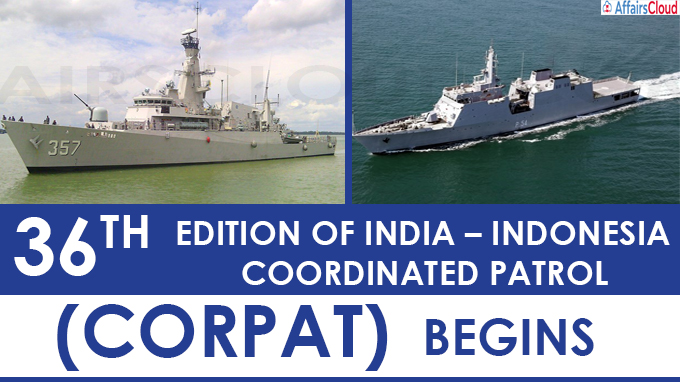 The 36th Edition of Coordinated Patrol (CORPAT) was held between the Navies of India and Indonesia from July 30-31, 2021 in the Indian Ocean region (IOR).
i.Indian Naval ship (INS) Saryu, an indigenously built Offshore Patrol Vessel (OPV) along with Indonesian Naval ship KRI Bung Tomo took part in the coordinated patrol.
ii.It aims to enhance the maritime cooperation between the two navies and forge strong bonds of friendship across the Indo Pacific region.
iii. The patrol was held in “A non-contact, at sea only” format in view of the pandemic.
iv.Under SAGAR (Security And Growth for All in the Region) mission, Indian Navy has been actively partnering with countries in the littoral states of Indian ocean to enhance maritime security in the region.

Overview of US Secretary Antony Blinken’s visit to India USD 25 million for India’s COVID-19 Vaccination Programme
The US Government announced an additional USD 25 million (~ INR 186 Crores) to support India’s COVID-19 Vaccination programme. The fund will be provided through the US Agency for International Development (USAID).
US, India Agree to Expand Multilateral Security Partnership
India and the US agreed to expand their Multilateral Security Partnership. Both countries are concerned about the growing influence of China in the Asia-Pacific & Indo-Pacific region.
About United States (US)
Capital – Washington, D.C.
Currency – United States Dollar (USD)
President – Joe Biden
>>Read Full News The Insolvency and Bankruptcy Code (Amendment Bill), 2021 presented by Minister of State for Corporate Affairs, Rao Inderjit Singh was passed in the Parliament without any discussions. The bill proposes a pre-packaged insolvency resolution process for Corporate debtors under the MSME (Micro, Small and Medium Enterprises) Development Act, 2006.

Improper use of Chemical Fertilizers is causing water pollution and air pollution, Nano urea being an eco-friendly product will protect the health of the soil and will result in reducing the use of urea by upto 50%. 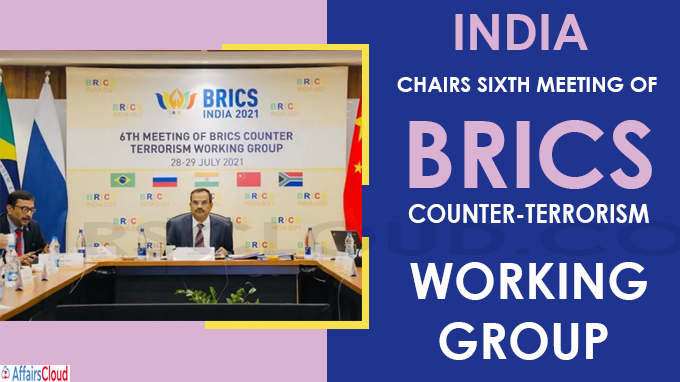 On July 28-29, 2021, the 6th meeting of the BRICS Counter Terrorism Working Group (CTWG) 2021 was held virtually which was chaired by Mahaveer Singhvi, Joint Secretary for Counter-Terrorism, Ministry of External Affairs (MEA).India Chaired the Meeting.

Key Points:
i.During the meeting BRICS countries exchanged views on terrorism threat assessment at national, regional and global level.
ii.They also agreed to further enhance counter terrorism cooperation in line with the Action Plan of the BRICS Counter Terrorism Strategy which was BRICS leaders in 2020.
iii.The Action Plan is one of the key deliverables during India’s Chairship of BRICS for increasing intra-BRICS collaboration on combating terrorism, radicalisation, financing of terrorism, misuse of the Internet by terrorists. 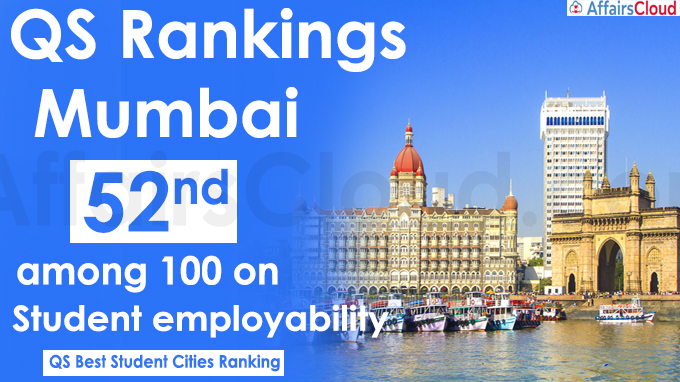 Mumbai, Maharashtra and Bangalore, Karnataka ranked above 100 in the ‘QS Best Student Cities 2022’ ranking of QS Quacquarelli Symonds, they became the only 2 cities to get ranked from India. About Emergency Credit Line Guarantee Scheme (ECLGS):
i.It was launched by the Finance Ministry in May 2020 as a part of the Government’s ‘Atma Nirbhar’ to provide credit Rs 3 lakh crore unsecured loans to COVID-19 hit MSMEs.
ii.Under ECLGS 3.0, the scope of ECLGS was extended to new sectors, such as hospitality, travel and tourism, and the lending under it was extended till September 30, 2021.
iii.Under ECLGS, 100 percent guarantee coverage was provided by NCGTC (National Credit Guarantee Trustee Company) to public and private banks and NBFCs (Non-banking Finance Companies).
>>Read Full News 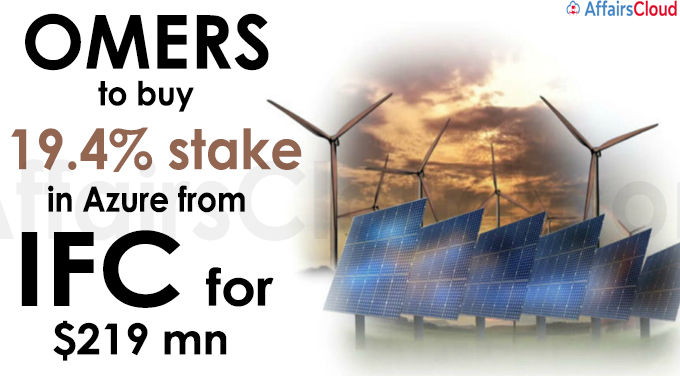 Key points:
i.India has set a target of installing 175 GW of renewable energy capacity by 2022, which includes 100 GW from solar, 60 GW from wind, 10 GW from bio-power and 5 GW from small hydro-power.
ii.The Central Electricity Authority estimated India’s power requirement in 2030 by 817GW with more than half from clean energy and 280GW from solar energy.
Note – PTT Public Company Limited (PTT Group) announced its acquisition of a 41.6 percent stake in Avaada Energy Pvt. Ltd for around $454 million.
About Azure Power Global
Headquarters – New Delhi
CEO – Ranjit Gupta
About International Finance Corporation (IFC):
It is one of the 5 organizations of the World Bank (WB).
Headquarters – Washington DC, United States (US)
MD – Makhtar Diop 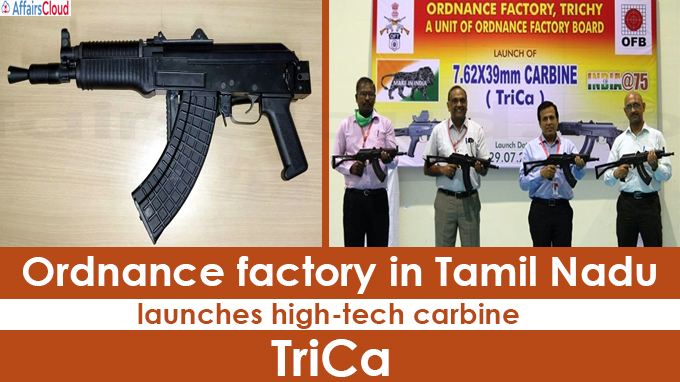 Features of TriCa:
Size: 7.62 X 39 mm portable weapon launched on the carbine platform
Weight: 3.17 kg (including the magazine) and
Range: 150 to 175 metre
Key Points:
i.TriCa is lighter as compared to the assault rifles with a range more effective than a typical sub-machine gun.
ii.It is a compact weapon to be packed in the jacket of security personnel.
iii.It is designed for the infantry combat vehicle, helicopter crew, security personnel for operations, and also for paratroopers, police and security personnel guarding highly secure facilities such as airports, and for use by the Special Operation Forces.
iv.TriCa has a special muzzle booster which helps in hiding the flash and mitigating the sound when fired.
v.It can use ammunition, magazines as well as the interchangeable parts of general assault rifles (TAR and AK-47-Avtomat Kalashnikova 1947).
About Ordnance Factory Tiruchirappalli (OFT):
It is under the aegis of Ordnance Factory Board (OFB), Ministry of Defence (MoD), Government of India.
Establishment– 1966 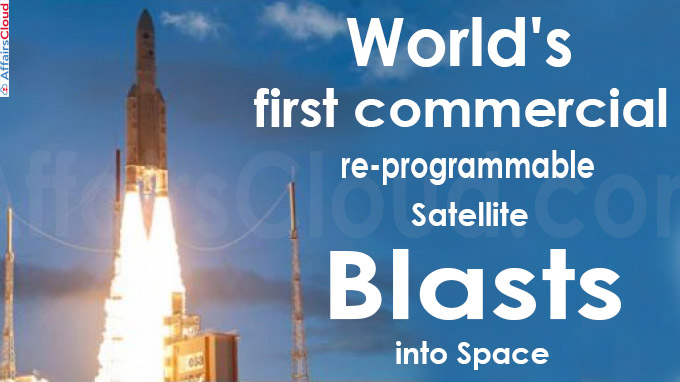 European Space Agency (ESA) launched ‘Eutelsat Quantum’ – the world’s 1st commercial reprogrammable satellite into space aboard Ariane 5 rocket from French Guiana.  It is a fully flexible software-defined satellite.
i.The satellite has been developed under an European Space Agency partnership project with satellite operator Eutelsat, Airbus & Surrey Satellite Technology.
ii.An reprogrammable satellite allows the user to repurpose it even after being launched into orbit. It can be reprogrammed in real-time to suit the changing purposes of the user.
iii.The Quantum satellite is capable of responding to changing demands for data transmission and secure communication during its lifespan of 15 years and will cover the areas from West Africa to Asia.
>>Read Full News

Captain Ramesh Babu, has authored a new book titled “My Own Mazagon: The History of a Little Island in the Bombay Archipelago”. The book published by Indus Source Books features the history and story of Mazagon, the island which was merged into a single entity as Bombay. 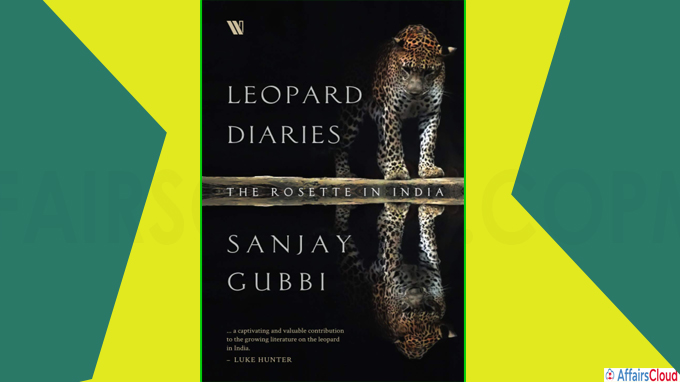 Wildlife Biologist, Sanjay Gubbi authored a book about Leopard titled ‘Leopard Diaries – the Rosette in India’, in which he says about the food habits, ecological context, and conservation of Leopard along with the suggestions to overcome leopard–human conflict.

About the Author:
i.Sanjay Gubbi is a wildlife biologist, Scientist (Western Ghats), working on the conservation of large carnivores like tigers and leopards.
ii.He was awarded Whitley Award (popularly known as the Green Oscars) (2017) and the Co-Existence Award (2019) among several others, for his work.
Leopard: It is one of the five extant species in the genus Panthera, a member of the cat family, Felidae. As per the government’s report, Madhya Pradesh has the highest number of leopards, about 26 percent of the total number estimated in the country. 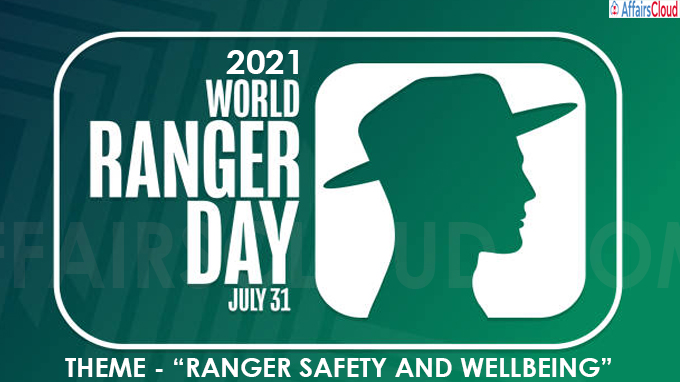 Karnataka has become the first state in the country to provide 1% horizontal reservation for the transgender in each category of general, Scheduled Castes (SC), Scheduled Tribes (ST) and Other Backward Classes (OBC) for all government services after amending the Rule 9 Sub Rule (1D) Karnataka Civil Service (General Recruitment) Rule, 1977.

Key Points:
i.1% reservation specifies all general as well as reserve categories for the third gender. Meghalaya State Investment Promotion (MSIP) Society has signed a Memorandum of Understanding(MoU) with Invest India, an investment promotion agency under the Ministry of Commerce and Industry, to promote the trade and industries of Meghalaya.