On august 04,2019 CORAS (Commandos For Railway Security), a special railway unit for the Indian railways  and a new establishment manual for the Railway Protection Force(RPF) was launched by union Railway Minister Shri Piyush Goyal at a function in New Delhi railway station. 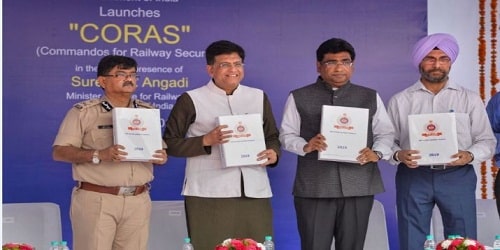 Cctv cameras:
CCTV (Closed Circuit Television) cameras are to be fixed at every railway station to ensure the safety and security of the passengers. The camera links can be handled by local stations, RPF, Government Railway Police(GRP), and also in the minister’s office.

CORAS:
It is a seperate Commando unit of the Railway Protection Force.
Vision: To respond in situations pertaining to damage, disturbance, disruption of train operations, providing safety to passengers, service during disaster situations in railway area.